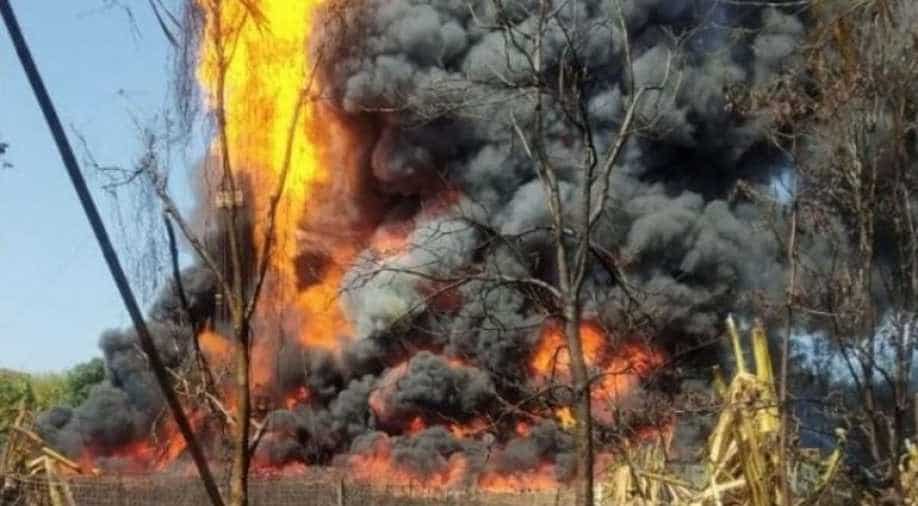 Smoke from the fire can reportedly be seen from 10 km away and locals claim it has spread to nearby villages.

A massive fire has engulfed a natural-gas producing well of Oil India Limited (OIL) in upper Assam's Tinsukia district, that has been leaking gas for the last 14 days.

Two firefighters who were engaged in controlling a blaze in Assam’s Baghjan were killed on Wednesday. Their bodies were found near the natural gas well that ignited on Tuesday.

The National Disaster Response Force (NDRF) confirmed that the bodies of Durlov Gogoi, 30 and Bikeshwar Gohain, 56, were found from a pond near the well at Baghjan.

The oil well, part of Baghjan oil fields, had suffered damage after a blowout on May 27 and has been spewing gas since then.

Smoke from the fire can reportedly be seen from 10 km away and locals claim it has spread to nearby villages.

#WATCH Massive fire at the gas well of Oil India Ltd at Baghjan in Tinsukia district, Assam. A team of National Disaster Response Force (NDRF) is present at the spot pic.twitter.com/Tw2G92aPXy

Several fire tenders from Oil India Limited, ONGC, and Tinsukia and Dibrugarh districts were rushed to the spot. A company spokesperson said while no casualty was reported in the incident, one ONGC employee suffered minor injuries. The cause of the fire is yet to be ascertained.

The Indian Air Force and the Army are assisting in the firefighting operations, after the Sarbananda Sonowal government requested for help. The Air Force has sent three fire engines, and the Army has reached the area and is on stand-by. The area has been cordoned off by paramilitary forces.

Nearly 3,000 people from Baghjan were evacuated and at least one dolphin, one particolored flying squirrel and a variety of fish died as condensate — residue from gas condensing after coming in contact with water.

A statement from OIL said, ''While cleaning operations were on at the well site, the well caught fire. Fire tenders are at the site controlling the spread of fire.''

While the clearing operations were on at the well site, the well caught fire.There is no casualty reported. Fire tenders are at the site controlling the spread of fire. There r violent protests around the well site. Once the situation is normal, the experts will move to the site. pic.twitter.com/HaCgLGeQtr

There were protests in the area as the fire broke out, threatening the lives and livelihood of the people already facing the impact of the blowout for the last two weeks amid the Covid-19 crisis.