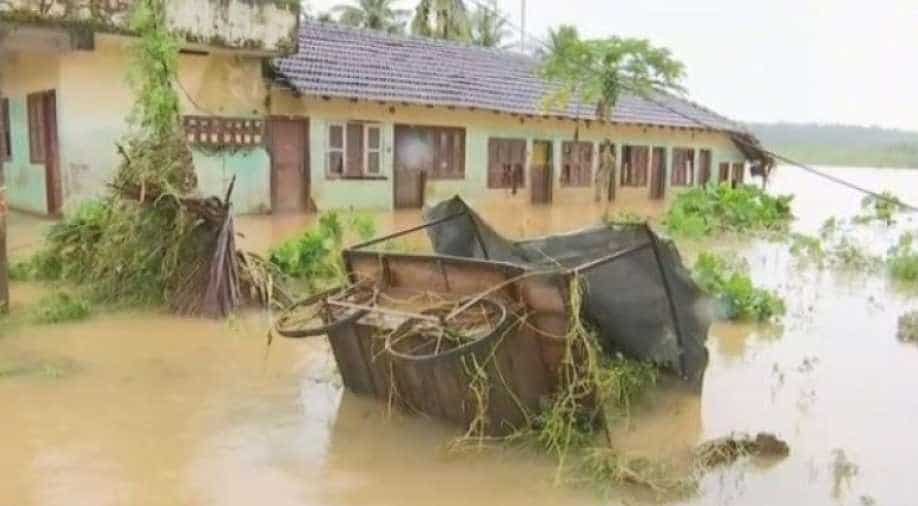 A few passenger trains have been partially hit and rail traffic on Kollam-Punalur-Sengottai section has been suspended due to adverse weather conditions.

Rain fury today continued unabated in Kerala, where 67 people have died so far, with the Kochi international airport announced shut till Saturday after water gushed inside the airport area and train services remained suspended in many parts of the state.

A red alert has been sounded in 12 of the 14 districts.

Operations at the Kochi airport have been suspended till August 18 and flights were being diverted to various airports.

Airlines including IndiGo, Air India and SpiceJet have announced the suspension of their operations to Kochi.

Kerala: Death toll due to flooding caused by heavy and incessant rains in the state rises to 67. (File pic) pic.twitter.com/UrUMcjugc8

"All flights to/fro Kochi, stand cancelled till Aug 16, 2018, due to runway unavailability owing to flood situation. For cancellations/rescheduling, please visit bit.Ly/2ndGnZ8 We hope everything gets normal soon," IndiGo said in a tweet.

Aluva: Rescue and relief operations underway for people in the flood affected areas across the state. Visuals near Palakkad area. #KeralaFloods pic.twitter.com/0DbhXdrCWw

Air India tweeted, "In view of the suspension of operations at @KochiAirport, penalties on no-show, date/flight change or cancellations on all confirmed tickets to and from Cochin are waived off. Pax may contact #airindia call centre or #airindia website."

A few passenger trains have been partially hit and rail traffic on Kollam-Punalur-Sengottai section has been suspended due to adverse weather conditions.

On Thiruvananthapuram-Thrissur section, trains will be delayed due to speed restrictions due to rise in water levels in rivers and lakes.

The engineering department is continuously monitoring the safety of bridges, railways said.

From Kasaragod in the north to Thiruvananthapuram in the south, all rivers are in spate, shutters of several dams, including Mullaperiyar, have been opened.

In the high-range Idukki district, an 85-year-old woman was killed in Elakkal and a 52-year-old woman died in Keerithode when mounds of earth fell on their homes.

A man from Tamil Nadu was killed last evening when earth fell on a hotel he was working in Munnar while six other employees were rescued.

In a similar incident, a couple and their six-year-old son were killed when earth fell on their house at Kondotty in Malappuram district early today.

#Kerala: 17,974 people shifted to 117 relief camps in Ernakulam district due to heavy rainfall in the state

A fisherman was electrocuted in Thrissur after he came in contact with a live electric wire.

Tourist hill stations including Athirappally, Ponmudi and Munnar closed and restrictions put in place for tourists.

Periyar, Chalakkidy Puzha and Pampa rivers were overflowing in central Kerala, while the water level in Killiyar, Karamanayar, Vamanapuram rivers and Parvathyputhanar canal in Thiruvananthapuram district are steadily rising.

Incessant rains and strong winds have battered the high ranges of Thiruvananthapuram, including Nedumangadu, Bonacaud and Neyyattinkara area, since last evening.

The low-lying areas of the capital city including Gowreesapattom and Kannanmoola are under water, hitting hard normal life.

At least 18 families have been stranded in Gowreesapattom here as the area remained inundated.

A joint team of police and fire service personnel is trying to rescue them, many of whom have sought refuge on the roof of two-storey buildings.

The water overflowing from Amayizhinchan canal has caused the unprecedented water logging in places like Gowreesapattom.