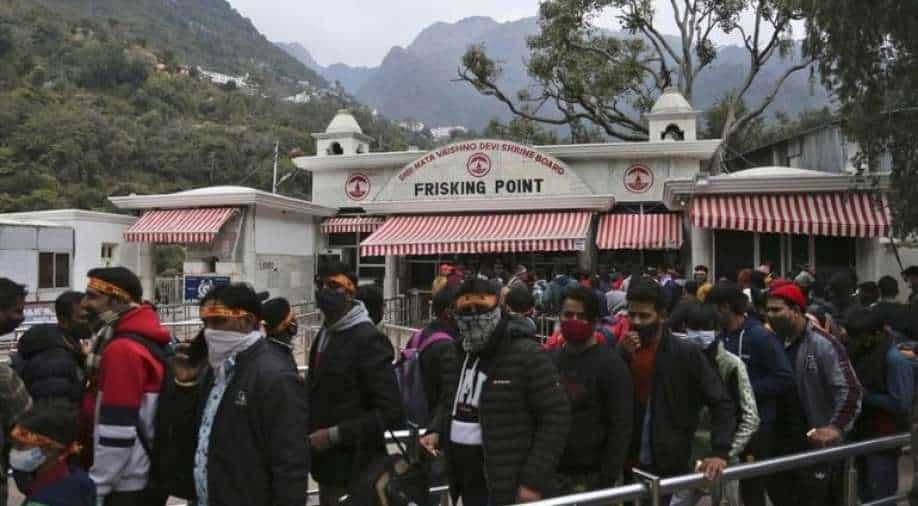 Hindu devotees line up at the frisking point before trekking towards the holy cave of Mata Vaishno Devi shrine following a fatal crowd surge in Katra, India Photograph:( PTI )

Jammu and Kashmir Lieutenant Governor Manoj Sinha on Sunday announced a slew of measures to ensure the safety of pilgrims visiting the Vaishno Devi Temple in Jammu and Kashmir`s Katra.

In a series of tweets, the Office of J-K LG informed that in a meeting chaired by him with the Shri Mata Vaishno Devi Shrine Board, it was decided that steps including decongestion of the entire track, appropriate use of technology for effective crowd and queue management, and radio frequency identification (RFID) tracking shall be installed.

The LG in a tweet said, "Steps including decongestion of the entire track, appropriate use of technology for effective crowd and queue management, RFID Tracking to be put in place. Members of the Board to monitor the implementation."

Sinha further announced an additional ex-gratia amount of Rs 5 lakh for the Next of Kin (NoK) of the pilgrims who lost their lives in the Vaishno Devi stampede that claimed the lives of 12 pilgrims and left several others injured on Saturday.

The Office of J&K LG tweeted, "Chaired a meeting of SMVD Shrine Board. Several decisions have been taken to ensure the safety of pilgrims. Besides Rs 10 lakh announced as an ex-gratia, an additional amount of Rs 5 lakh is to be given to the NoK of the pilgrims who lost their lives in the unfortunate tragic incident."

It added, "Directions issued for physical and systematic improvements wherever required after critical examination, augmentation of infrastructure, online booking to be made 100 per cent."

Earlier in the day, Divisional Commissioner Jammu Raghav Langer, probing the Mata Vaishno Devi stampede incident has issued a public notice stating that those desiring to submit any evidence or facts may appear before the enquiry committee either online or in-person by January 5.

The stampede took place at around 2:15 am near gate no. 3 at Shri Mata Vaishno Devi Bhawan.Police said that as per initial reports, an argument broke out which resulted in people pushing each other, followed by the stampede.