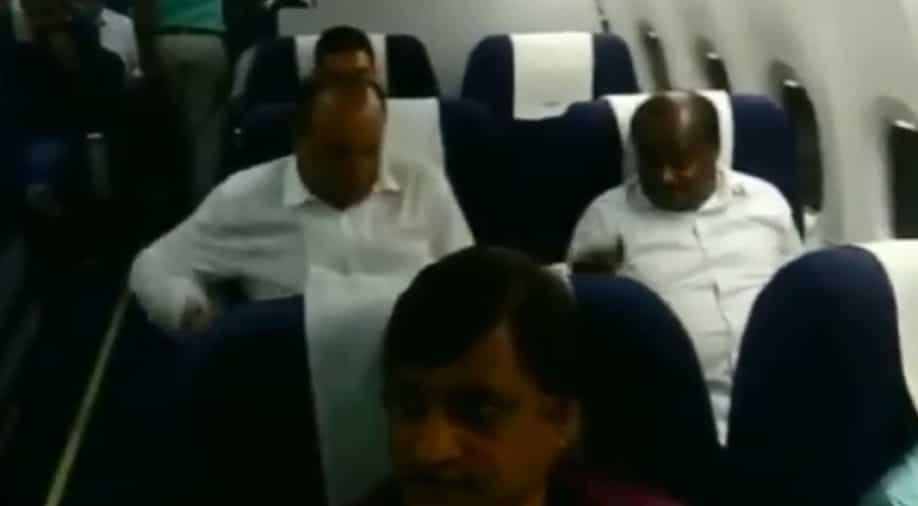 HD Kumaraswamy along with other JD(S) MLAs on board a Hyderabad-Bengaluru flight ahead the floor test in Karnataka assembly on May 19. Photograph:( ANI )

Newly-elected JD(S) and Congress lawmakers from Karnataka, who had been camping in two hotels in Hyderabad to avoid any poaching bids, arrived in Bengaluru today for the crucial floor test in the state assembly.

The Congress MLAs are camping at the Hilton Hotel in the city.

"All the legislators left for Bengaluru by road at 10 pm," Vamshi Chand Reddy, Congress MLA in Telanagana said earlier.

The Supreme Court had on Saturday ordered that a floor test be held in the Karnataka Assembly at 4 pm today to confirm whether newly-appointed BJP Chief Minister BS Yeddyurappa enjoys a majority in the state.

Though the legislators were prepared to stay in the city hotels for a few days, they all left in the night by road because of the Supreme Court order.

JD(S) MLC (Member of Legislative Council) Basavaraj said on Saturday morning that as many as 36 legislators belonging to his party and 77 of the Congress were camping in hotels in Hyderabad.

The MLAs (Members of Legislative Assembly had reached Hyderabad in four buses from Karnataka on Saturday morning.

Congress' Karnataka unit chief K Parameshwara said his party was confident of keeping their MLAs together and alleged that the BJP was trying to woo their lawmakers with incentives.

"All our MLAs are with us. Tomorrow they will be present in the Assembly (in Bengaluru)," he said.

The JD(S) had on Friday night alleged that chartered flights that were scheduled to carry its legislators along with those of the Congress from Bangalore to Kochi were denied permission by the Directorate General of Civil Aviation at the last minute.

However, a Civil Aviation Ministry official had said that DGCA permission was not required for charter operations within India.

Political observers say Hyderabad was chosen for keeping the MLAs together owing to the rapport that Telangana Chief Minister K Chandrasekhar Rao has with the JD(S) chief and former Prime Minister HD Deve Gowda.

Rao had recently met Gowda at the latter's residence before the Karnataka polls.

The Telangana chief minister had appealed to Telugu people living in the neighbouring state to vote for the JD(S).

#WATCH HD Kumaraswamy along with other JD(S) MLAs on board a Hyderabad-Bengaluru flight ahead of floor test in Karnataka assembly tommorrow #KarnatakaElection2018 pic.twitter.com/44Fkc9OYne