Jalalabad attack: 'Terror coming from across the border,' says Afghanistan ambassador to India 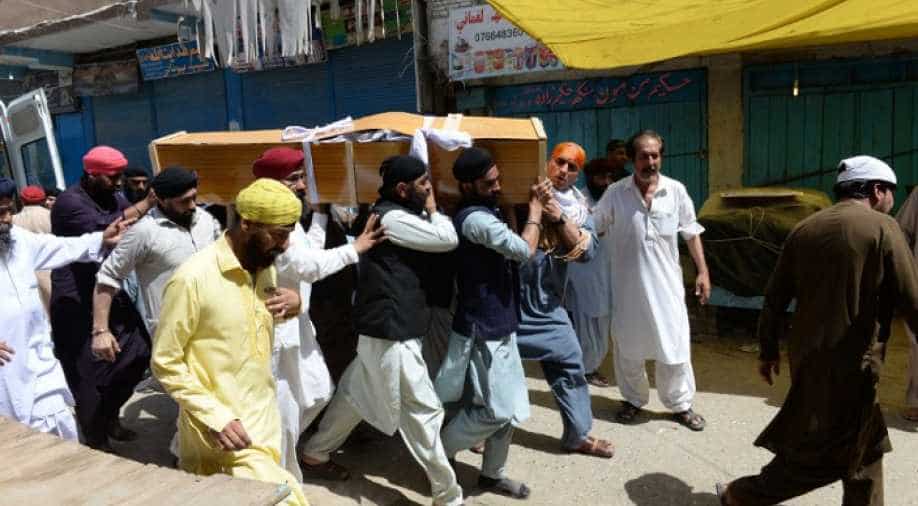 Afghan Sikhs carry the coffin of a victim killed in a suicide attack in Jalalabad. Photograph:(AFP)
Follow Us

The group of Sikhs were on their way to meet Afghan President Ashraf Ghani when the explosion occurred.

A suicide blast in Nangarhar province in Jalalabad claimed lives of 19 people and injured 20 others, mostly Sikhs and Hindus including politician Avtar Singh Khalsa.

The Afghan ambassador said Afghanistan is under attack, adding that "terror is coming from across the border".

The group of Sikhs were on their way to meet Afghan President Ashraf Ghani when the explosion occurred.

"Afghanistan is under attack," Abdali said.

On the death of Sikh politician Avtar Singh Khalsa, Abdali said he was a "patriotic Afghan", asserting that Afghan Sikh & Hindus were "more patriotic than common Afghans".

"Loss of Avtar Singh is an irreparable loss, Sikhs & Hindus have been in all walks of life in Afghanistan," the Afghan ambassador said.

"Jalalabad attack was an attack on our diversity and Indo-Afghan ties," he felt, saying: "India, Afghanistan have been impacted by terror from one country."

Hinting at Pakistan, the ambassador said: "A country in the region is sponsoring terror, both countries have been impacted by one country."

"The world should not keep quiet on the role of the country that is sponsoring terror," Abdali insisted.

The attack was condemned by PM Modi who said it was an attack on "Afghanistan's multicultural fabric". PM Modi said the country was ready to assist Afghanistan.