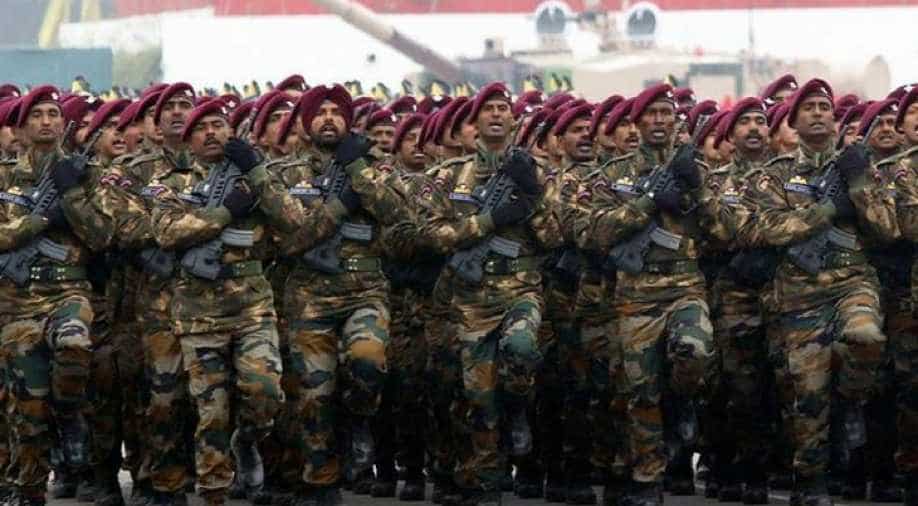 With the ever-so-increasing number of ceasefires along the LoC and IB border, the capital outlay for the three defence services for purchase of new weapons, aircraft, warships and other military hardware has been pegged at Rs 99,947 crore. Photograph:( PTI )

One of the major takeaways from his speech was his high-profile plan to create the “world's largest health insurance programme”. The Budget allocated maximum resources towards the agriculture and rural sector in India.

This is also being seen as a test for Prime Minister Narendra Modi to maintain fiscal discipline without stifling economic growth ahead of general elections next year.

But, another key pointer in the finance minister’s speech was the allocation towards the defence sector.

An outlay of Rs 2.95 lakh crore was set aside for the defence budget for the next fiscal which is an increase of 7.81% over last year's Rs 2.74 lakh crore.

With the ever-increasing number of ceasefire violations along the LoC, the capital outlay for the three defence services – Army, Navy & Air Force -  for purchase of new weapons, aircraft, warships and other military hardware has been pegged at Rs 99,947 crore making the total amount allotted towards defence at of Rs 2,95,511 crore from Rs 2,74,114 crore last year.

However, the Indian Air Force capital budget was 46% lower than its requirements, the Indian Army’s was 41% and the Indian Navy’s was 32%, reports said.

A measly revision in the defence sector, also considering the present situation with Pakistan and China, is a crushing reminder of the need for developing the military. Also, the defence outlay works out to just about 1.58% of the projected GDP for 2018-19 -  the lowest figure since the 1962 war with China.

India is the fifth largest military spender in the world and also the largest importer of arms. About 13% of the world's total imports between 2012-2016 were by India, a report by Stockholm International Peace Research Institute stated.

A throwback to 1961 - the year before the India-China war reveals India’s defence expenditure was Rs 266.72 crores, however, in 1962 – the year of war - the defence services budget was only increased by Rs 1.7 crore.

The year after the Sino-India war, the then Finance Minister Morarji R Desai decided to allocate a whopping amount of Rs 708.51 crore in defence out of the total revenue expenditure of Rs 1852.40 crores.

Low spending on defence has often been cited as the main reason for India's lack of defence preparedness, leading to its defeat against China in 1962.

Cut to 1964, the year before Indo-Pakistan war, of the total revenue expenditure of Rs 2,041 crores, an amount of Rs 718 crores was allocated for the defence services.

In 1965, the year of the war, the increase in revenue was Rs 29 crores from 1964 figure, this was the year when the National Defence Remittance Scheme was also introduced.

"Honourable Members will also appreciate that while it has always been our policy to restrict expenditure on defence to the maximum extent possible so as to conserve all possible sources for securing the well-being of our people, we cannot afford to take any chances with the security of the nation, devoted though we are to the cause of peace" the FM Sachindra Chaudhuri was quoted saying in his speech in 1966.

In the preceding year, the military budget was 3.4% (a miniscule revision). In 1974 though, the budget drastically dropped to 2.995% of the total GDP.

The usual thinking in the government is that only when there is a war the defence budget should be increased. Otherwise, no focus is laid in this sector, it is not given much priority.

Moreover, since the last three years, there has actually been a decline in budget allocation for capital investments against requirements, or “projections” in the official sense, a factor that could delay procurement and modernization of the armed forces, according to a report by the Parliamentary Standing Committee On Defence 2017-18.

"Funds allocated (each year) under the budget estimate have been reduced at the revised estimate stage by the ministry of finance, broadly on the pretext of trend of expenditure at that point of time," the defence ministry said in its response to questions by the Parliamentary committee.

"Though there has been under-utilisation of capital budget with regards to budget estimate (except in 2016-17), there has been either excess expenditure or more than 99 percent utilisation when compared to final grant," it said.

With just a 7.81% increase in the defence budget, the modernisation of the services cannot be supported. It also means that the policy and acquisition decisions which have been taken will not be executed.

“Transformation in defence production requires higher allocation. If the government is keen on promoting ‘Make in India’ in defence production then there has to be a proper infrastructure creation for that and that requires huge money. When you are operating under a low budget then all your mega acquisition plans become severely constrained,” said Vikram Mahajan, Director (Defence and Aerospace), US-India Strategic Partnership Forum (USISPF).

Experts added that what ultimately needs to be done is to ensure that India's military can face a high-tech Chinese Army, especially when China's 2017 defence budget stands at $152 billion (Rs 9.75 lakh crore).

This would naturally call for stricter action towards defence expenditure through the years but historical facts and the timelines have also proven that there has not been enough inclination towards India’s defense needs.