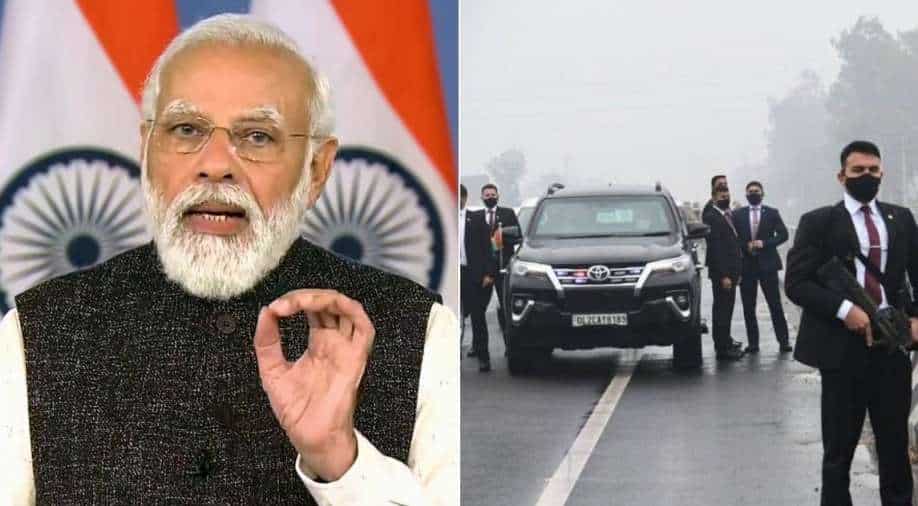 PM Modi's convoy was stuck on a flyover when he was on his way to address a rally in Punjab. Photograph:( PTI )

A three-bench judge, headed by Chief Justice NV Ramana, asked the Centre and Punjab governments to not proceed with their inquiries in the matter

The committee will be headed by a former Supreme Court judge as it will investigate the details of the incident that led to the January 5 incident.

On Wednesday, PM Modi was on his way to address a rally in the Ferozepur district of Punjab. His convoy was exposed in the open and was left stranded in a serious security breach in Ferozepur when some protestors blocked his convoy when it reached a flyover.

The Indian Prime Minister was supposed to lay the foundation stone of development projects, however, his convoy was blocked and he was stuck on the flyover for 15-20 minutes.

Now, in the latest development, a three-bench judge, headed by Chief Justice NV Ramana, asked the Centre and Punjab governments not to go ahead with their inquiries in the matter.

Other members of the bench are Justices Surya Kant and Hima Kohli. The decision came after the Punjab government urged the apex court to set up a court-monitored probe into the incident.

A day after the incident, Indian President Ram Nath Kovind met PM Modi and expressed his concerns over the massive security breach. The Rashtrapati Bhavan handle after the meeting tweeted, "President Ram Nath Kovind met Prime Minister Narendra Modi at the Rashtrapati Bhavan today and received from him a first-hand account of the security breach in his convoy in Punjab yesterday."