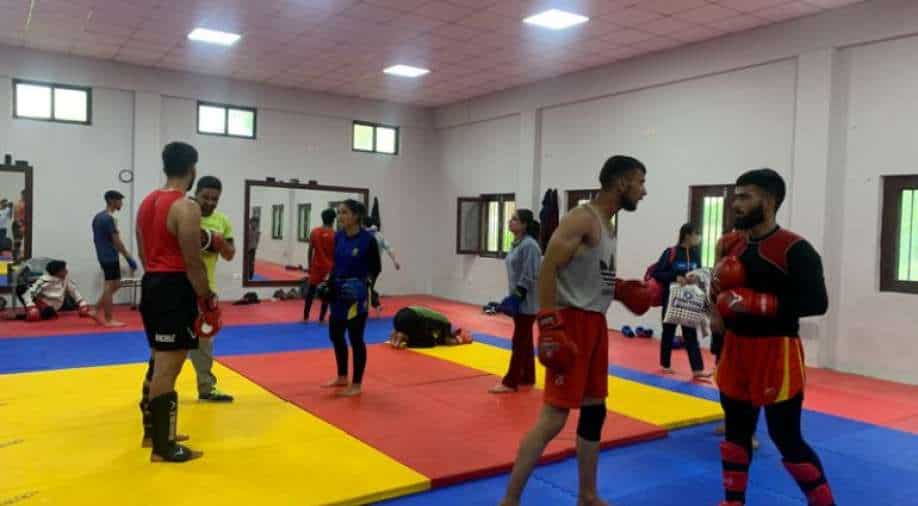 The government has also been pushing for sports activities to keep the youth away from drugs and other illegal activities. Photograph:( WION )

The Kashmir Division has shown immense potential in the national games in various sports. Hundreds of medals have been brought home by these young athletes in the national tournaments

The Indian government is trying to make Jammu and Kashmir a sports hub, by introducing world-class infrastructure and a new sports policy for the Union Territory. According to the sports council of Jammu and Kashmir, around 500 athletes won medals in various games at the national level.

There has been a massive change in sports infrastructure across Jammu and Kashmir. Many new stadiums at the international level have been built while many others are being constructed in various districts of the Union Territory. The Sports Council of Jammu and Kashmir has been pushing youngsters to take up sports.

"It's happening. We are doing our best to attract more and more youngsters towards sports. If we talk about last year, thousands of youngsters were brought in to be trained in various sports. In every event we do, more than 200-300 athletes are registered with us. There are various disciplines. We are way ahead in the medal tally as well. Parents are supportive as well. Sadia won a medal in Wushu, while Arif represented us at the Winter Olympics. Parents are pushing children to go for sports and our efforts are also to bring in as many as possible. We have won more than 500 national medals since last year, "said Nuzhat Ara, Divisional Sports Officer, Kashmir.

The Kashmir Division has shown immense potential in the national games in various sports. Hundreds of medals have been brought home by these young athletes in the national tournaments.

"We get a lot of time to train. We won so many medals last year, we won 70 golds, around 90 silver medals, and 145 bronze medals. We got these medals due to the continuous efforts from the last 3-4 years. A lot of changes have been made in the department. We have worked very hard with our secretary. We are also pushing athletes in major sports as well. We have built one indoor stadium in every district of Kashmir Valley.'' said Mushtaq Zargar, Sports Officer, Sports Council.

Jammu and Kashmir also received a special package from the Indian Prime Minister, Narendra Modi. A 200-crore package has been given to the Union Territory. Special sports festivals are being organised in every district of Union territory to look for talent in these smaller areas and train them to become professional athletes.

"The government has focused a lot on sports in the last few years, especially in the last 5 years." The reason is that the government has done a lot of funding. We always had talent, but we needed infrastructure, and now finally we have all the facilities. We have indoor as well as indoor stadiums. This is just the start and now we have to work on the second phase, which is talent identification and major games. We have to keep the Olympics in our minds. The biggest field is the Olympics, and that's our target as well." Shafqat Shafi, Coach, Sports Council.

The youth of the valley are happy about the changes in the sports sector. Girls in huge numbers are taking up sports and representing India at national and international events.

"I won a bronze medal at Kanyakumari recently in Wushu. It's a great step that sports are getting a lot of support from the government." I even see a lot of girls taking up sports, and it's great for our country. The parents should be supportive and proud of these girls too. I got to know about Wushu from my friends and started learning here. I won a bronze in my very first nationals. I want to go further and represent the country at international levels, "said K Mushtaq, Wushu Player."

The government has also been pushing for sports activities to keep the youth away from drugs and other illegal activities. The youngsters who pick up sports not only make a name for themselves but also earn out of it. These sportspeople are inspiring the younger generations also.

"I started when I was in second and I played martial arts." I played for the Nationals and won gold, bronze, and many other medals. I hope youngsters stay away from drugs and take up sports, "said Shah Talha, a Wushu player.

In the last two years, Kashmir athletes have proved their mettle. While Arif Khan represented India at the Winter Olympics in Beijing, Sadia Tariq won India a gold medal at the Moscow Wushu Championship. Bilquis Mir, Director of water sports, also became the first Kashmiri woman to be a judge at the Olympics. And in the ongoing IPL, Umraan Malik has also made his name by being the fastest bowler in India.