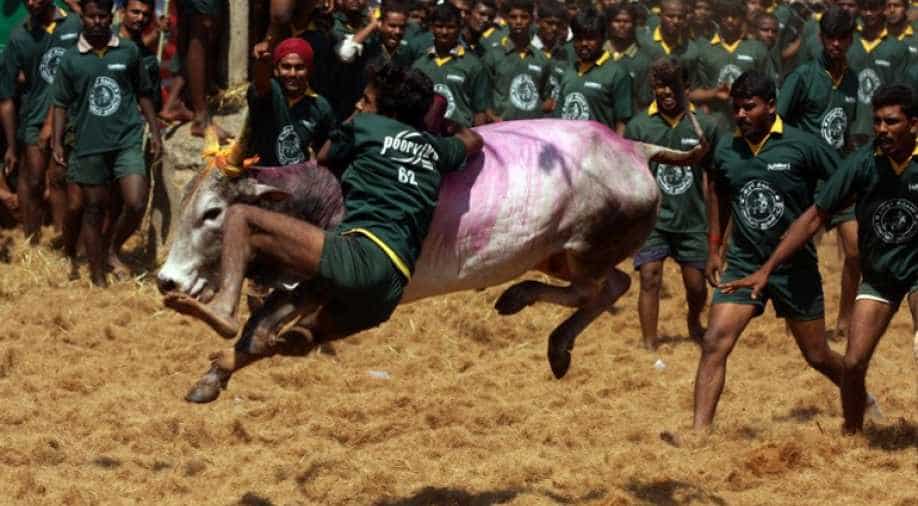 Jallikattu is a bull taming sport in which groups of men face off against a bull in an open field. They try to grab and cling on to the (indigenous Tamil) bull's distinctive hump. Photograph:( AFP )

Bull owners started using foreign breeds or cross bred bulls to improve their winning chances and such foreign bulls had won titles in the years 2019 and 2020 at Alanganallur, Madurai

The Madras High Court has directed the Tamil Nadu government that only native breed bulls (boy indicus) can take part in the traditional bull-taming sport, known as Jallikattu.

This order prohibits the participation of foreign or cross bred bulls and requires vet's certification of participating bulls. This was in response to a writ petition filed by E.Seshan, who stated that Jallikattu and similar sports were meant to promote indigenous breeds of bulls, but were witnessing the wrongful participation of foreign/cross breed bulls. The order was delivered by Justices N. Kirubakaran (Retd) and P.Velmurugan.

Jalikattu is a bull-taming sport where an athlete is required to cling to/embrace a running bull for a said time and distance, by putting his arms around the bull's hump. If the man holds on to the bull, he wins the contest and if the bull manages to dislodge the athlete from itself, it is the animal’s victory. Native bred bulls (bos indicus) are best suited for this sport as they have well-defined and large humps aligned with their front legs.

It was pointed out that when foreign breed or cross bred bulls are used, they have a huge body and tiny hump, thus making it impossible for the participants to cling onto the hump. Another hazard was that non-native bulls had the tendency to trample and crush players on the field. Also, players only had the option of hanging onto the hump and not the tails or horns.

However, bull owners started using foreign breeds or cross bred bulls to improve their winning chances and such foreign bulls had won titles in the years 2019 and 2020 at Alanganallur, Madurai. It must be noted that Jallikattu was banned by the Supreme Court in 2014 stating that it was an act of cruelty against animals. However, via an ordinance in the State Assembly and a subsequent law, the sport was permitted since 2017.

In this petition, it was pointed out that the 2017 amendment and law to permit Jallikattu sport in Tamil Nadu was solely aimed at preserving native breeds. It was mentioned that the relaxations to conduct the sport were only specific to native breeds and not foreign ones.

The order copy had photographs of the native bulls and foreign bred/cross bred ones to indicate the stark difference in hump size and the position of the hump (with respect to the frontal legs). These pictures were juxtaposed to demonstrate the difference between the Indian variety (bos Indicus) and the cross bred (bos indices x bos taurus) and help instant identification.

The court has now ordered that a certificate issued by Animal Husbandry department identifying a bull as a native one must be filed, while applying to participate in the sport. A stern warning was issued to Doctors, against passing off (wrongly certifying) foreign/hybrid bulls as native ones. It also urged the government to encourage bull owners and farmers groom native breeds by offering subsidies or incentives. It was added that measures must be taken to avoid artificial insemination of animals, which would deny the voiceless animals their mating rights.