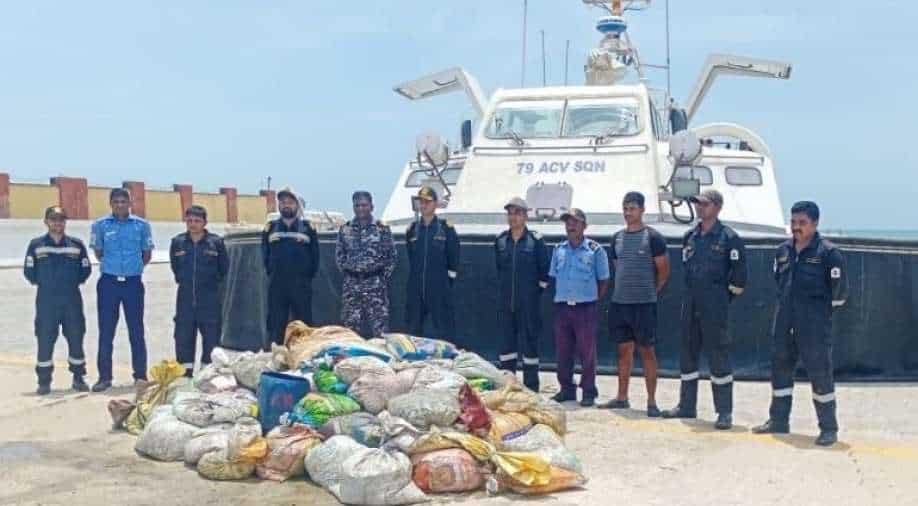 The Indian Coast Guard seized a two-tonne shipment of sea cucumber. The marine species was being smuggled via Indian waters. The coast guard tracked the boat, and laid a cordon to block the suspect vessel. The boat was then searched by the team. The recovery of 200 gunny bags of sea cucumber, weighing 2000 kg or 2 tonnes, was made

Based on a tip-off, the Indian Coast Guard team at Mandapam, Ramanathapuram, Tamil Nadu seized a two-tonne shipment of marine species sea cucumber, that was being smuggled via Indian waters.

Early on Sunday, coast guard teams in the Gulf of Mannar and Palk Bay areas tracked the boat, and laid a cordon to block the suspect vessel at sea.

Sea cucumbers are an important constituent of the marine ecosystem as they play an important role in maintaining the health of the ecosystem. In India, sea cucumber is treated as an endangered species listed under schedule 1 of Wildlife Protection Act of 1972.

The boat, which was found anchored 15km off the Vedalai South locality in Madapam, was boarded and searched by an ICG team. The boarding team of ICG Hovercraft H-183 recovered 200 gunny bags of sea cucumber, weighing 2000 kg or two tonnes.

According to the coast guard, investigation revealed that the consignment was planned for transshipment across the International Maritime Boundary Line.

Sea cucumbers are in high demand in China and Southeast Asia, where it is consumed as food and used in medicine. This endangered species is primarily smuggled from Tamil Nadu to Sri Lanka in fishing vessels from Ramanathapuram and Tuticorin districts.

By excreting inorganic nitrogen and phosphorus, they enhance the productivity of benthic animals - those living on the ocean floor.

On September 18, in order to mark International Coastal Cleanup Day, the ICG-led school and college students, NCC cadets and volunteers conducted a cleanup along India’s coast.

The 7,000-member strong effort led to the collection of 44 tonnes of plastics and garbage from the oceans and beaches, spread across 44 locations.