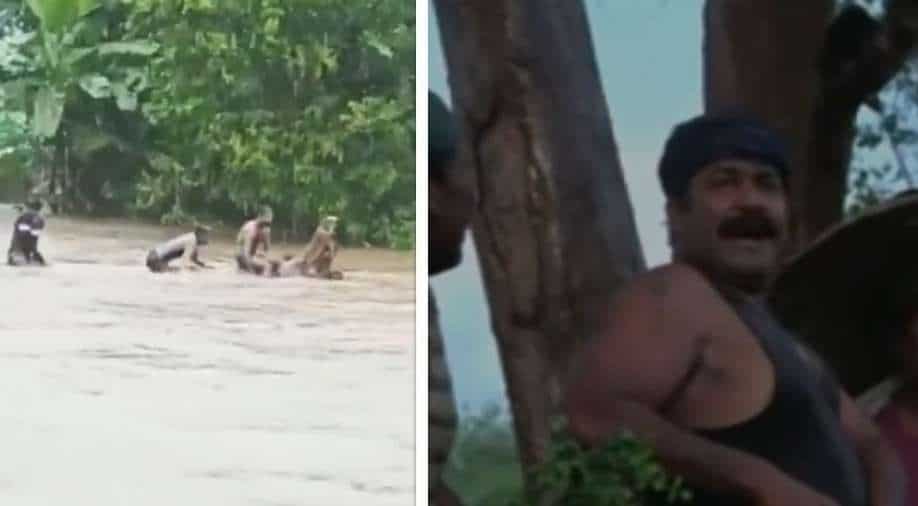 The youth stuntman (L) and Mohanlal in a still from the movie Photograph:( WION Web Team )

A case under the Disaster Management Act has been slapped against the trio at Kerala's Moozhiyar Police station.

Three young men from the southern Indian state of Kerala braved an overflowing river to recreate a daring cinema stunt. They successfully performed the dangerous stunt and also made a video of it, with the movie song playing in the background. However, their glory remained short-lived, as a case under the Disaster Management Act has been slapped against the trio at Kerala's Moozhiyar Police station.

#kerala : Amid #keralarains ,3 youngsters recreated a scene from @Mohanlal film ‘Naran’, where the actor swims in a river in spate& catches a floating log

A video of the stunt shows the youth swimming towards a floating log that is moving at a fast pace along the river. Afterwards, they are seen climbing onto the log and sailing on it. The youth have recreated a similar scene from the Mohanlal film 'Naran', where the actor swims across the tide to catch a large floating log.

This incident comes at a time when several districts across Kerala are facing heavy to extremely heavy rainfall and the Indian Meteorological Department has issued a red alert for eight districts and an orange alert in five districts. Over the last few days, rain-related incidents have claimed over 20 lives in the state alone.