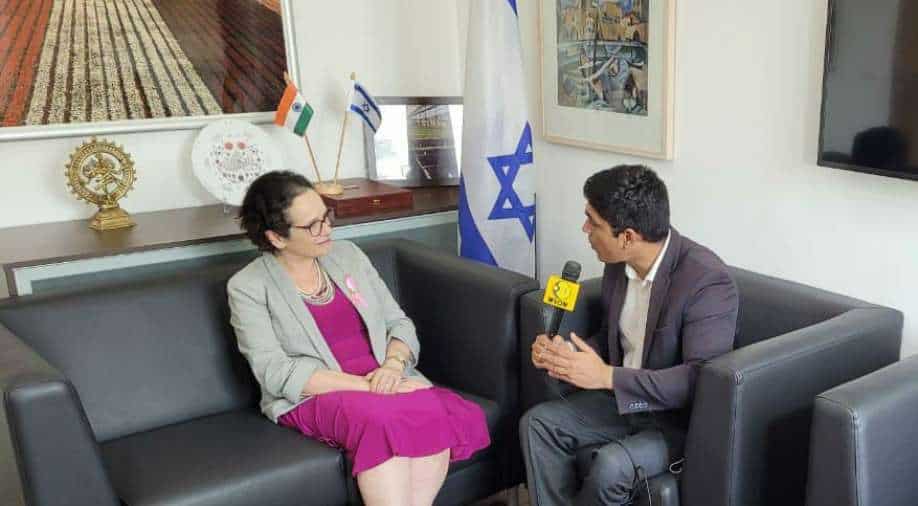 The foreign ministers of the four countries had met earlier this week virtually with focus on trade, climate and maritime security.

Top Israeli diplomat to India Rony Yedidia-Clein has said that the foreign minister ministers of India, UAE, Israel and the US will be meeting again in Dubai.

The foreign ministers of the four countries had met earlier this week virtually with focus on trade, climate and maritime security. Speaking to our diplomatic correspondent Sidhant Sibal, Deputy Chief of Mission (DCM) at the Israel embassy in Delhi, Rony Yedidia-Clein, said,"We are very hopeful that this will really bring a synergy of the trade and cooperation that has been going between the countries, meaning we make whole of it bigger than the sum of its parts, something we are looking forward to."

Her comments come even as India's external affairs minister Dr S Jaishankar is on a visit to Israel. She said the visit will help cement the relationship, adding, "very, very hopeful, either the Israeli prime minister will visit here or hopefully the Indian PM will visit Israel". India and Israel have had close engagement and in the past has seen visits by both the prime minister and the president of the country. Both countries will soon celebrate the establishment of 30 years of formal relationship.

WION: How do you view S Jaishankar's visit?

Rony Yedidia-Clein: We see it as a very good visit, it is been quite a long visit from Sunday afternoon to Thursday which is quite unusual in terms of regular diplomatic engagement.

Also, in terms of intimacy, he has had a number of good meetings with our foreign minister, just this morning with the prime minister, president and speaker of Knesset and so the intimacy of these meeting and the level of conversation has really been quite good and helped in cementing an already good relationship between India and Israel. We have not been able to have high-level visits due to COVID-19,  so we are happy to see restarting of the visits.

WION: If you can list the outcome of the visit?

Rony Yedidia-Clein: Israel has joined the International Solar Alliance(ISA) which is an Indian initiative and is really wonderful.

Also, we have the agreement in principle to recognise each other's vaccination certificate which is a very important thing for us. We also see going forward joint celebration of 30 year anniversary of our diplomatic relations, also a new agreement for women in the STEM ( science, technology, engineering and mathematics) studies which is very important for the women of both countries and that is something we will be cooperating in coming months. So, a variety of things we are cooperating on and this visit has cemented them.

WION: How do both countries plan to celebrate the 30th year of the establishment of formal ties?

Rony Yedidia-Clein: We are looking forward to really a wide range of different activities, we have high-level visits and are very, very hopeful, either the Israeli prime minister will visit here or hopefully the Indian PM will visit Israel, maybe later in the year..within that framework of the anniversary, we are also hoping to see other ministers visiting back and forth.

Our embassy here is working with the Indian embassy in Israel on a number of programmes, we are doing a lot of cultural programmes in India. We really are celebrating this wonderful relationship. The fact that we have gained so much over the year, both in terms of visibility and the scope of the relationship is remarkable and we are ready to celebrate it.

WION: You just mentioned the high-level visits...can you elaborate on it?

Rony Yedidia-Clein: That is what we are planning and it has been part of the conversations going on this week. There has been a remarkable level of intimacy and also the chemistry is there. They really had very good conversations, and these conversations will go on. The PMs will be speaking again over the next few weeks and we do hope, sometime during 2022 there will be high-level visits, and there will be lower visits by ministers.

WION: Crucial aspect was people to people ties..how do you plan to take it forward?

Rony Yedidia-Clein: As I said the relationship has gone from something that was under the radar and just based on security, nobody knew about it - to something that is very vibrant, very much alive and very visible.

We see Israelis are waiting to come after COVID-19. They want to come to India and see wonderful sites and Indians who come to Israel are really welcome. We see cultural exchanges, business going on, trade has gone to up to $4 billion a number that does not include security, military trade. Also, $4 billion from almost nothing in 30 years is quite an achievement thanks to the people and business connection. That is because of Israelis coming here, Indians going to Israel, talking to Israelis, utilising the relationship to make friends and make money.

WION: How do you view support to Israel from India, you have seen it on Twitter as well...

Rony Yedidia-Clein: We love it, it's great, we really feel the love of Indian people for us, and we love them back. It is a tremendous feeling that when we open our Twitter feed in the morning and we see the tremendous tweets about how much Indians love Israel and we probably have the best job of any Israeli diplomat, we feel the love here, not like diplomats in other countries where they have to strike a little bit more for it. It's really fantastic.

WION: We saw the Quad, India, Israel, US and UAE FMs virtual meet. Will a mechanism be evolved? Will there be more meetings?

Rony Yedidia-Clein: I don't know, if a formal mechanism means an office that will be set up, that is something that I know about. There will be meetings, the four ministers will each nominate a high-level professional from either their foreign ministry or from another ministry who will be part of the four-member working group and then the working group will get together to see how they can bring businesses together in order to work together.

There will be a high-level meeting of the ministers again probably in Dubai, which has been suggested and probably will happen. We are very hopeful that this will really bring synergy in trade and cooperation that has been going between the countries meaning we make the whole of it bigger than the sum of its parts, something we are looking forward to.

My foreign minister has said that he loves the word synergy, which means the whole is greater than the sum of its parts and he really sees this as synergetic geometric cooperation.

WION: And is Quad a direct outcome of the Abraham Accord?

Rony Yedidia-Clein: Yes, of course, Abraham Accord is something that has been blessed by India. India was one of the first countries to congratulate on that accord and it can bring peace and prosperity to the Middle east. The Abraham Accord is something that all the countries of the Middle East, at some stage will hopefully be joining and will bring peace in the Middle East and prosperity to all the people of those countries.

WION: Is Quad against any country in particular?

Rony Yedidia-Clein: We don't see it against any country, we see it as a positive force for peace and prosperity.