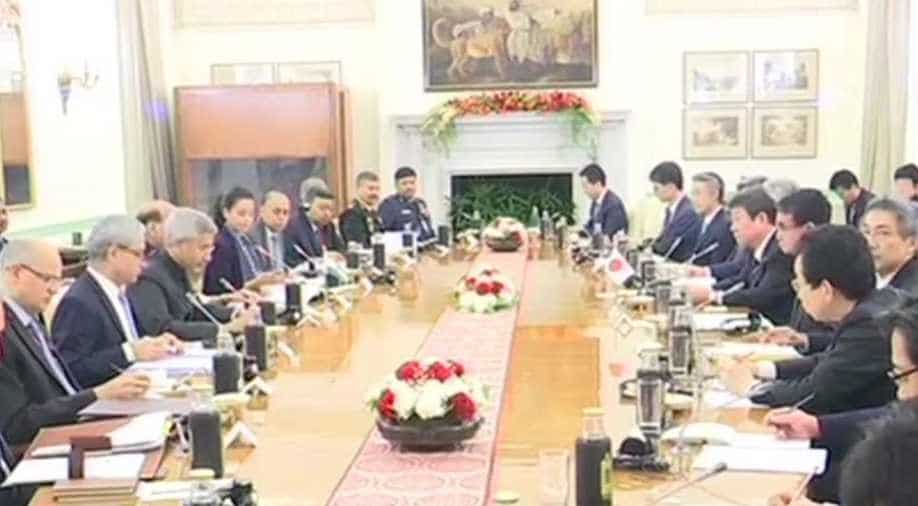 India, Japan also urged a call on North Korea for 'complete, verifiable and irreversible dismantlement of all weapons of mass destruction'. Photograph:( ANI )

Other than Pakistan, North Korea and the South China Sea was also discussed during the meet at Delhi's Hyderabad house.

In a strong message, India and Japan have called Pakistan to act against terror groups operating out of territory under its control and comply with the commitments it has made to the anti-terror financing body Financial Action Task Force (FATF).

The joint statement issued after India, Japan maiden 2+2 Defence and Foreign Ministers meeting said, "The Ministers underlined the need for all countries to ensure that all territory under their control is not used to launch terrorist attacks on other countries in any manner."

"They noted in this context the threat posed to regional security by terrorist networks operating out of Pakistan and called upon it to take resolute and irreversible action against them and fully comply with international commitments including to FATF," the statement added.

Pakistan had given commitments to the FATF but has failed to live up to them and has received a rap from the Paris-based body. Islamabad faces a probable blacklisting and has time till February when the plenary meets next.

Other than Pakistan, North Korea and the South China Sea was also discussed during the meet at Delhi's Hyderabad house.

Both sides urged a call on North Korea for "complete, verifiable and irreversible dismantlement of all weapons of mass destruction" and urged Pyongyang to "resolve the abductions issue at the earliest date". North Korea is known to have abducted many Japanese citizens, Tokyo has nudged the country to release them soon.

On the South China Sea, both the sides called on the 'Code of Conduct' to be negotiated and not to "prejudice the rights and interests of the stakeholders using the South China Sea and freedoms of all states under international law". The nations also reiterated the need for a "free, open, inclusive and rules-based Indo-Pacific region in which the principles of sovereignty and territorial integrity are ensured".

Both sides made "significant progress" on Acquisition and Cross-Servicing Agreement (ACSA) negotiations and expressed a "desire for an early conclusion". ACSA is a logistics agreement. Its negotiations started last year, expected to be signed during Japanese Prime Minister Shinzo Abe's visit to India in December.

The Japanese side will be sending a liaison officer at the Information Fusion Centre - Indian Ocean Region (IFC-IOR) - in Gurgaon and both the countries have agreed for the first India-Japan joint fighter aircraft exercise to take place in Japan.