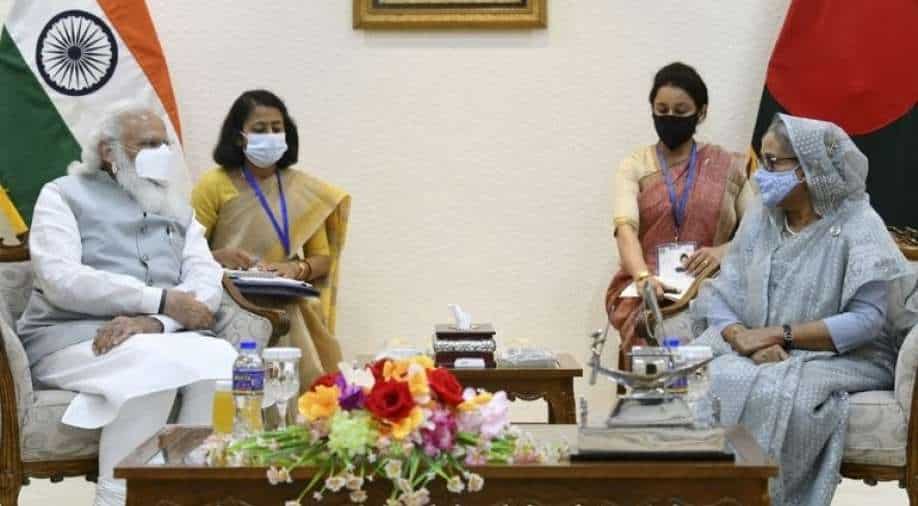 Indian Prime Minister Narendra Modi and his Bangladesh's counterpart Sheikh Hasina during their meeting in Dhaka on Saturday. Photograph:( AFP )

Prime Minister Narendra Modi on Saturday said that both India and Bangladesh want to see peace, stability, and love instead of instability, terror and unrest in the entire world.

Addressing the Matua community after visiting the Orakandi Temple, PM Modi, said, "Both India and Bangladesh want to see the world progressing through their own progress. Both the nations want to see stability, love, and peace in the world instead of instability, terror and unrest."

"During the coronavirus pandemic, India and Bangladesh have proven their capabilities. Today, both nations are facing this pandemic strongly and fighting it together. India is working by considering it its duty that 'Made in India' vaccine reaches the citizens of Bangladesh," he said.

"His successor, Sri Sri Guruchand Thakur has a huge role in bringing the teachings of Harichand Thakur to the people, uniting the Dalit-afflicted society. Guruchand ji gave us the formula of devotion, deed, and knowledge," he added.

"Our siblings of Matua community celebrate 'Baruni Snan Utsav' every year on the auspicious occasion of the birth anniversary of Sri Sri Harichand Thakur. A large number of devotees from India come to Orakandi to participate in this festival," he added.

After that, he paid tribute to Bangladesh's 'Father of the Nation' Sheikh Mujibur Rahman at Bangabandhu Mausoleum Complex, Tungipara. He signed the visitors' book and also planted samples at the complex. PM Modi was accompanied by his Bangladeshi counterpart Sheikh Hasina during his visit to the complex.

Later in the day, Prime Minister Modi will hold talks with Sheikh Hasina and they are likely to sign few key pacts. Thereafter, he will call on Bangladesh President Abdul Hamid. This is Prime Minister Modi's first foreign trip since the Covid-19 outbreak last year.