I am saddened: Smriti Irani on Congress MP's alleged misbehaviour in Lok Sabha 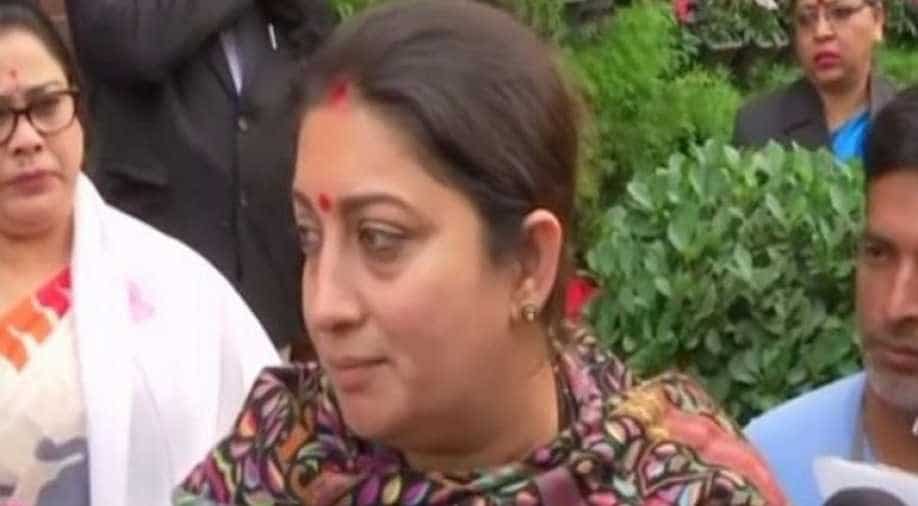 Union Minister Smriti Irani on Friday said that she was 'saddened' with the alleged misbehavior of two Congress MPs in the Lok Sabha after she spoke on an attack on a rape survivor in Uttar Pradesh's Unnao.

Speaking to reporters in the Parliament complex, Irani said: "Today, I had a Congress MP chastising me for, he said, I spoke aggressively. In the House, some male MPs came towards me rolling up their sleeves."

"After that, a youth MP said why did Smriti even speak? I am saddened. If speaking is a crime since I am a BJP member, I want to see in Parliament on Monday how is the opposition going to punish me further for speaking in the interest of women," she said.

The matter of alleged misbehavior was raised by Parliamentary Affairs Minister Pralhad Joshi after the House met at 1.30 pm following an adjournment earlier. He said that it was wrong to come in front of a woman MP in a 'threatening position.'

"She was expressing her opinion. The behavior is most uncalled for. Call the two members. They should apologise," he said.

BJP MP Sangeeta Kumari Singh Deo said one of the MPs behaved in a threatening way. "He pulled up his sleeve. He came forward," she said.

Meenakshi Lekhi, who was in the Chair, asked Congress leader Adhir Ranjan Chowdhury to talk to the party MPs regarding the apology and adjourned the House till 2.30 pm.

The House earlier witnessed a clash between Congress and BJP members with both accusing each other of politicising the brutal incident in which the Unnao rape survivor was set ablaze.

Irani accused the opposition parties of being quiet "when the rape was used as a political weapon" in West Bengal panchayat elections.