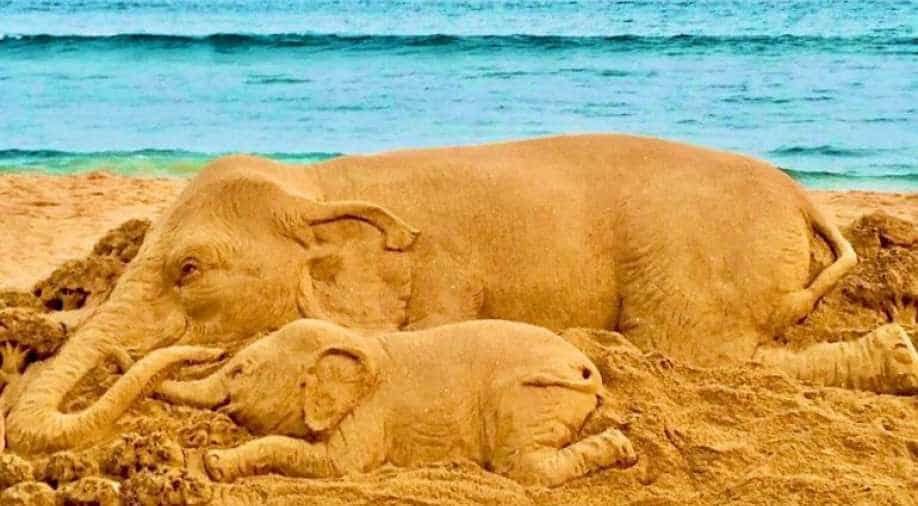 A few days ago, a pregnant elephant lost her life after she was fed with a pineapple full of firecrackers

Widespread anger erupted in India, with common people, central government, and celebrities speaking against the horrific killing of a pregnant elephant in Kerala.

A few days ago, a pregnant elephant lost her life after she was fed with a pineapple full of firecrackers.

Prominent sand artist Sudarsan Pattnaik made his trademark sand art on a beach at Puri in eastern India to pay his tributes to the deceased animal. He shared his artwork on social media, which said, "Humanity has failed again". He further said that his latest artwork is for a cause to save elephants.

Humanity has failed again...........
One of my SandArt on save #Elephant. pic.twitter.com/nzcM4PNDvr

Central Government has taken a very serious note of the killing of an elephant in Mallapuram, #Kerala. We will not leave any stone unturned to investigate properly and nab the culprit(s). This is not an Indian culture to feed fire crackers and kill.@moefcc @PIB_India @PIBHindi

"We will not leave any stone unturned to investigate properly and nab the culprit(s). This is not an Indian culture to feed firecrackers and kill," Javadekar said in a Twitter post.

BJP MP and environmental activist Maneka Gandhi slammed the state government of Kerala for the incident. She further said that one elephant is killed in Kerala in every three days. She also expressed her concern over the declining population of elephants in the country.

Kerala's Forest Minister K Raju told news agency ANI that strict actions would be taken against culprits who did this act.

One of India's prominent industrialist Ratan Tata on Twitter wrote: "Such criminal acts against innocent animals are no different than acts of meditated murder against other humans".

"Justice needs to prevail," he added.

Maybe animals are less wild and humans less human. What happened with that #elephant is heartbreaking, inhumane and unacceptable! Strict action should be taken against the culprits. #AllLivesMatter pic.twitter.com/sOmUsL3Ayc

My eyes start tearing whenever I even think of this story. Glad its getting the attention it is online & in politics. #KeralaElephantMurder https://t.co/oKNK98esya

Shame on Humanity. She trusted humans that was her fault.
Pregnant elephant was fed a pineapple stuffed with firecrackers.

The earth was made for all BEINGS, not just for Human Beings.

In social media too, users expressed their grief and anger on the incident, with words like "cruel humanity", "end of humanity" being used widely.