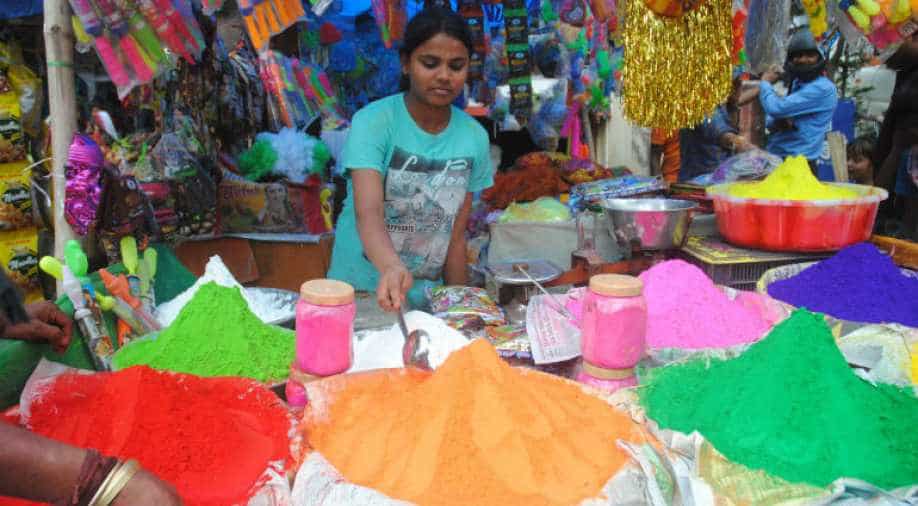 A vendor selling colours ahead of 'Holi' in Guwahati on Tuesday. Photograph:( ANI )

Many people report itching, and suffer from a burning sensation, scaling, redness and watering of the eyes due to synthetic colours used on Holi.

Just days before Holi, the festival of colours, the focus is back once again on organic colours. These colours are called organic because these are made by using organis waste like used flowers and leaves.

The organic colours are also preferred because of the spate of skin diseases during Holi and the days afterwards.

"In an approximately Rs 4,500-crore unorganised Holi colour market, the share of the organic variety is miniscule, but growing," said Madhumita Puri, Founder and Executive Director of Avacayam Naturals, a Delhi-based manufacturer of organic colours.

The adverse effects of synthetic colours was observed in a study titled 'The Holi Dermatoses', published in the Indian Journal of Dermatology.

In the study conducted on 42 people in Kolkata, 11 of them suffered due to activities related to preparation of colours and 12 reported aggravation of pre-existing dermatoses.

Nearly 60 per cent patients reported itching, while others reported to have suffered from a burning sensation, scaling, redness and watering of the eyes, as per the study.

How organic colours are made

"After the flowers are collected, the workers sort them in different baskets according to their colour. Then, the petals and seed pods are separated and cut. These are then spread out to dry in a well ventilated space for all the moisture to evaporate.

"After that, they are ground and processed - without adding any chemicals - to be made into colours for people to enjoy," said Puri, adding that the process of collection, drying, and grinding continues throughout the year but it is only before festivals that these are processed into the final product.

"In a year, we manufacture around 20 tonne of pure organic colour, some of which is sold to Walmart India. One kilo of colour is sold between Rs 600 and Rs 1,000."

When asked about the expiry date of these colours, Puri said: "The product is a dry one and completely natural. We have been testing them since five years now and have not found any deterioration in the quality, fungal infestations, or weevils. So there is no 'expiry date' to them."

Another such manufacturer is Jaipur-based Red Earth which makes colours "exclusively from edible materials and scent them with pure, traditional attars".

Himanshu Verma, Director-Owner of Red Earth, said, "Every 2-3 years, we change our colour palette... this year we have four colours - Sunehra Dhamaal, Shvet Abeer, Neem Sanrachna, and Gulabi Nagariya - that are inspired by local materials."

"The colours are curated on the basis of availability of local materials. We use items like camphor, neem, mehendi, multani-mitti, geru powder, arrowroot, flour, and others," Verma said, adding that 50-60 per cent materials used are edible so that even if someone ingests them by mistake, they will not be as harmful.