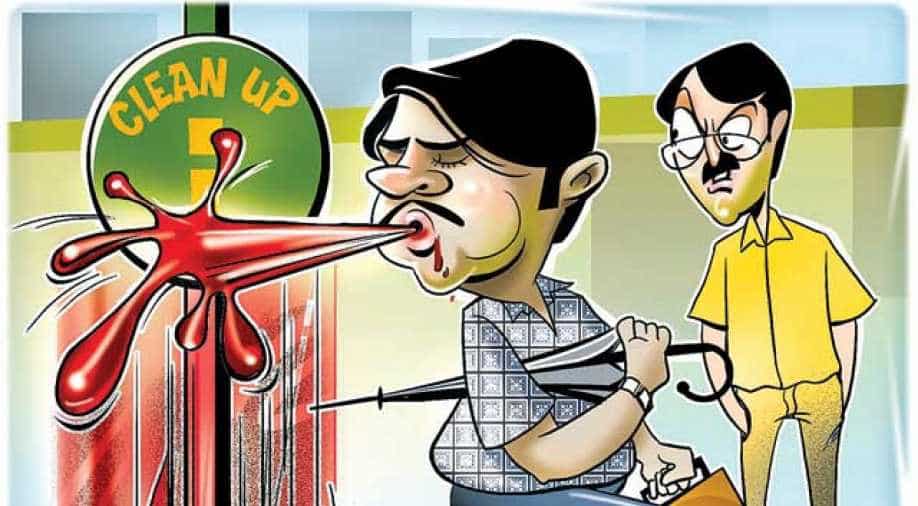 In West Bengal, citizens may have to pay up to 1 lakh rupees as fine for spitting, even littering. Photograph:( DNA )

In West Bengal, citizens may have to pay up to 1 lakh rupees as fine for spitting, even littering.

Spitting in public is one of the vilest things one can do to humiliate another person. It's a form of violence, menace to public health. A person who intentionally spits in the face of a frontline worker is no victim regardless of the outcome. Not only does the act evoke disgust but it deserves the strictest of punishment.

In New Zealand, a man has been sentenced to three months in jail for spitting at a police officer. Police say it has reported a surge in cases of cops being spat on even for inquiring about a person's health.

They say such behaviour is making it tough for the officers to function within their communities as they're being forced to self-isolate for 14 days. Now the New Zealand authorities say a person could face 14 years in jail for spitting on someone and infecting them with a disease.

Back in India, countless stories of suspected coronavirus patients spitting on health-care workers have emerged but so have countless unsubstantiated reports. Unrelated videos and lies are being masqueraded as news. Meaningless debates on such reports are stirring up communal hate and the Centre and state governments have decided to nip the infodemic in the bud.

In Odisha, the chief minister himself has urged citizens to behave responsibly and stop spitting. In Uttar Pradesh, the government has banned the sale of 'paan masala'  and spitting in public places. Gujarat has decided to impose a fine of 500 rupees on anyone caught doing the same. In West Bengal, citizens may have to pay up to 1 lakh rupees as fine for spitting, even littering.

Punishments are growing more severe even globally. In Belgium, offenders could now be fined for up to 2,000 dollars for spitting in public. Similarly, in Australia, the health ministry has introduced a fine of 5,000 dollars. In Saudi Arabia, a man recently caught spitting in shopping trolleys could be subjected to the death penalty and in France, violators are being fined up to 197 dollars. Pandemic or no pandemic, spitting in public is plain wrong while spitting on health-care workers even more so.

Our governments are dealing with a pandemic and the least we can do as responsible citizens are to lessen their burden.