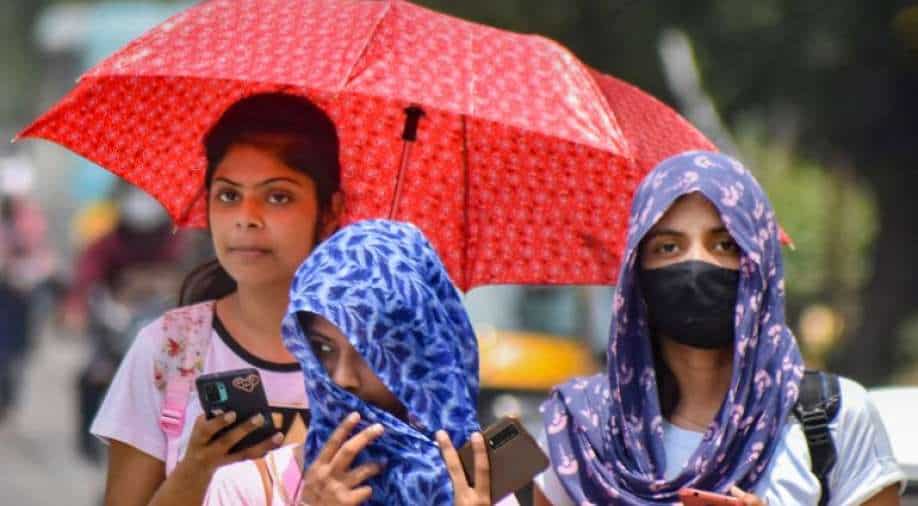 Women use scarfs to shield themselves from the heat wave, during a hot summer day in Gurugram. Photograph:( PTI )

According to the department's statistics, the minimum and maximum temperatures on Wednesday (May 11) are expected to be 28 degrees and 44 degrees Celsius

The Indian Meteorological Department (IMD) issued a yellow alert for a new heatwave in Delhi with temperatures expected to reach 44 degrees Celsius by Wednesday (May 11).

As per IMD experts, this heatwave could last till May 15 because a cooling weather system is unlikely to impact northwest India in the following week.

Also read | Heatwave is over in many parts of India, Delhi to experience rain on May 3: IMD

According to Mahesh Palawat, vice president (Meteorology and Climate Change), Skymet, a private weather forecasting agency said, temperatures will not rise dramatically in most parts of Delhi due to easterly winds brought on by Cyclone Asani over the Bay of Bengal, increased humidity levels.

Last week, sporadic rain, thunderstorms and strong winds gave some relief from the oppressive heat.  The temperature began to rise during the weekend reaching 42 degrees in some areas in Sunday (May 9).

The capital had a hot and dry March with no rainfall compared to the typical 15.9 mm. In April, it received 0.3 mm of rain, compared to a monthly average of 12.2 mm. Several regions of Delhi saw a heatwave at the end of the month with the temperatures reaching 46 to 47 degrees Celsius.

On Monday (May 9), increased temperatures and heatwave conditions disrupted normal living in most parts of Rajasthan’s western region.