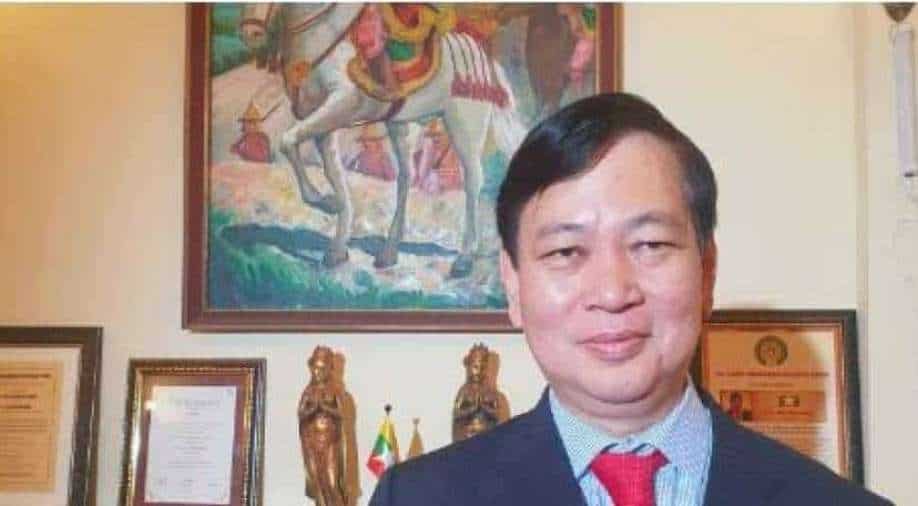 The relations between India and Myanmar have grown close over the years. Both countries had agreed to implement and operationalise connectivity projects like Kaladan Multimodal Transit Transport Project, Trilateral Highway and operationalisation of the Sittwe Port.

Myanmar's Ambassador to India Moe Kyaw Aung has confirmed that they have handed over five Indian insurgents to the Indian government in December last year and reaffirmed that his country will “never allow any insurgents to use its soil to engage in any hostile activities” against New Delhi.

Speaking to WION's Sidhant Sibal exclusively, envoy Aung, in a rare interview, said, “Myanmar and India have been traditionally enjoying a close friendship and amity based on mutual respect."

The relations between India and Myanmar have grown close over the years. Both countries had agreed to implement and operationalise connectivity projects like Kaladan Multimodal Transit Transport Project, Trilateral Highway and operationalisation of the Sittwe Port.

In fact, Myanmar has been one of the first recipient countries to receive India-made vaccines in January 2021 when New Delhi began exporting.

The envoy highlighted, “Myanmar has received a total of 15 million doses of Covisheld vaccines purchased from Serum Institute of India (SII) and completed the deal already last year".

WION: How do you see India-Myanmar ties? And what kind of engagement has been happening in the last one year, since the Indian Foreign secretary’s visit. One of the key focuses has been on connectivity. What is the latest development? And have Kaladan Multi-Modal project, Sittwe Port, been operationalised?

Moe Kyaw Aung: Since the establishment of diplomatic relations between Myanmar and India on 4 January 1948, Myanmar and India have been enjoying traditionally close friendship and amity based on mutual respect, mutual understanding, and time-tested friendly relations under the regional and multilateral frameworks.

For India, Myanmar is not only the gateway to the ASEAN region, but also the only state adjoining India with both land and maritime boundaries. Successive governments of both countries have maintained close and friendly relations in line with the Five Principles of Peaceful Co-existence.

In the last one year, there have been many engagements and cooperation in different sectors such as defence, energy and power, connectivity, trade, health and education, etc. Foreign Secretary Harsh Vardhan Shringla and officials from the Ministry of External Affairs were on a working visit to Myanmar from December 22 to 23.

The chairman of the State Administration Council, Prime Minister, Senior General Min Aung Hlaing received the top official. Connectivity is one of the focuses in the discussion. Singla expressed India's continued support for people-centric socioeconomic developmental projects, as well as their commitment for expeditious implementation of ongoing connectivity initiatives such as the Kaladan Multimodal Transit Transport Project and the Trilateral Highway.

The operationalisation of Sittwe Port is underway. Myanmar’s Ministry of Construction is undertaking necessary steps for the construction work starting from 109.2 Km (Myanmar – India border) to southwards of Myanmar. The project will contribute to the promotion of trade and connectivity between the two countries by shortening the distance from Kolkata to Sittwe by approximately 1,328 kilometres.

WION: Covid has been another issue. India recently sent vaccines. Have you requested more? What is the situation in your country?

Myanmar is one of a few countries which received vaccines once the Indian government lifted the restriction on exports of the Covid-19 vaccine. Also, Shringla handed over 1 million Covaxin jabs to the Myanmar Red Cross Society during his visit in December 2021.

Myanmar has received a total of 15 million doses of Covisheld vaccines purchased from the Serum Institute of India (SII) and completed the deal already last year.

Likewise, during the second wave of Covid pandemic faced by India, the State Administration Council donated a total of 8.85 tons of relief materials, including 500,000 surgical masks, 20,000 goggles, 50,000 face shields, 100,000 pairs of examination gloves, 100 5L oxygen concentrators and 20 power air-purifying respirator system to India on May 18, 2021.

The figure of Omicron cases has risen to 283 in total in Myanmar till January 29, 2022. Myanmar’s Covid situation is still controllable at this moment. However, I assume that Myanmar will further cooperate with the Indian government and India’s pharmaceutical companies for further vaccine supplies.

WION: Security has been another key issue. We know that India's northeastern states faced a number of attacks, and India and Myanmar have had a long-standing security cooperation. What has been the stance of Myanmar on India's concerns over the insurgent groups

Moe Kyaw Aung: Geographically, Myanmar shares a long land border of over 1,600 km with India. It connects four northeastern states of India: Arunachal Pradesh, Nagaland, Manipur and Mizoram. It also shares a maritime boundary through the Bay of Bengal. In this regard, cooperation in the security and defence sector of both countries has strengthened over the years.

Myanmar has reaffirmed our firm commitment to respect the sovereignty and territorial integrity of India. Myanmar has clearly reiterated that it will never allow any insurgents and negative elements to use its soil to engage in any hostile activities against its neighbouring country. Myanmar also appreciates India’s stance to uphold the same principle. Myanmar and India are on the same page as both agree that terrorism constitutes a significant threat to peace and stability in the region and should be confronted in all its forms and manifestations.

Both countries share the view that it is important to maintain security and stability along the India-Myanmar borders, which is essential for the socio-economic development of people living in the border areas. The Myanmar Armed Forces handed over a group of 22 Indian insurgents to the Government of India on May 15, 2020, and additional 5 Indian insurgents on December 15, 2021. They were linked to insurgent groups in Manipur, namely, the United National Liberation Front (UNLF), the People’s Revolutionary Party of Kangleipak (PREPAK-Pro), Kanglei Yawol Kunna Lup (KYKL) and the People’s Liberation Army of Manipur (PLA), the National Democratic Front of Boroland (NDFB-S) 5 and the Kamtapur Liberation Organization (KLO). This reflected the deepening ties between the two armed forces of Myanmar and India.

WION: How has been Myanmar's engagement with other neighbours, especially China.

Moe Kyaw Aung: In line with the 2008 Constitution, Myanmar practices independent, active and non-aligned foreign policy and shall not commence aggression against any nation. No foreign troops shall be permitted to be deployed in the territory. The five principles of peaceful co-existence— which Myanmar, India and China initiated in 1954—still act as fundamental principles for Myanmar in its relations with its giant neighbours, both India and China. Myanmar has been cooperating with both countries in the spirit of good neighbourliness and time-tested friendly relations under the regional and multilateral frameworks.