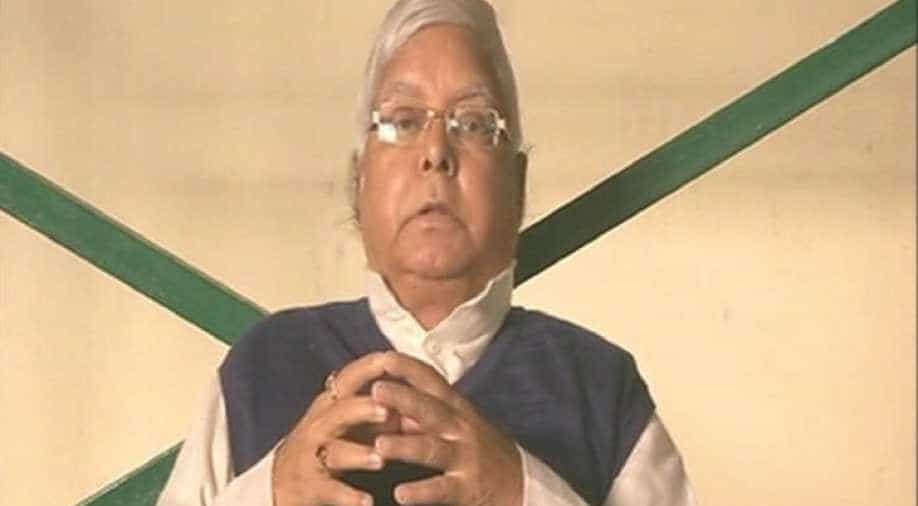 Lalu Prasad Yadav was taken into custody immediately after the verdict and sent to a jail in Ranchi. Photograph:( ANI )

#Visuals of Lalu Prasad Yadav outside Ranchi's Special CBI Court after being convicted in a #FodderScam case pic.twitter.com/BxValvnv8n

Soon after the verdict was declared, RJD leader Manoj Jha lashed out claiming that "legally amicable evidence provided was set aside".

The RJD leader said, "They are trying to scare and intimidate us and I want to tell them - Do whatever you want, your end has begun."

He also said the CBI has become a motorised parrot and the control mechanism in the hands of two most powerful people in the country.

He claimed that Lalu became a victim of a well-webbed conspiracy, adding, "We believe the judiciary system and we will go in the court and clear everything and the truth will prevail."

Taking a dig at Lalu Prasad Union minister Ravi Shankar Prasad that "the law will catch up with you if you commit corruption".

He further said: "For me, it is a matter of some personal assurance that I had the privilege to argue the PIL in Patna High Court in the early 90s leading to the institution of CBI inquiry which was strongly opposed by the then state government headed by Lalu Yadav"

Minister of Health and Family Welfare JP Nadda blamed Lalu Prasad for his unnecessary reason for politicising the verdict - following the RJD chief's tweet on how "truth had been made to appear as a lie."

Nadda said, "Lalu Prasad Yadav is even now politicising the issue instead of accepting the verdict, just to deviate he is levelling allegations of conspiracy on BJP. The alliance between Congress and Lalu Yadav's party is an alliance of corruption, connivance and cheating the people of India, it is clear from the verdict of the court."

Congress leader Manish Tiwari said that Yadav has been in this legal battle since 1996 when BJP leaders filed a Public Interest Litigation against him.

He also posed a question to the BJP asking why the part has not investigated the Srijan case so far.

Former Bihar chief minister Lalu Prasad Yadav was on Saturday convicted by a special CBI court in the 1996 fodder scam case along with 14 others co-accused in the case.

Lalu Prasad Yadav was taken into custody immediately after the verdict and sent to a jail in Ranchi.

Lalu Prasad was earlier convicted and sentenced to five years of imprisonment in one of the five fodder scam cases against him. The former Bihar chief minister faces four other fodder scam cases.

The scam came to light in 1996. The CBI filed chargesheets against Prasad and 55 other co-accused in 1997.