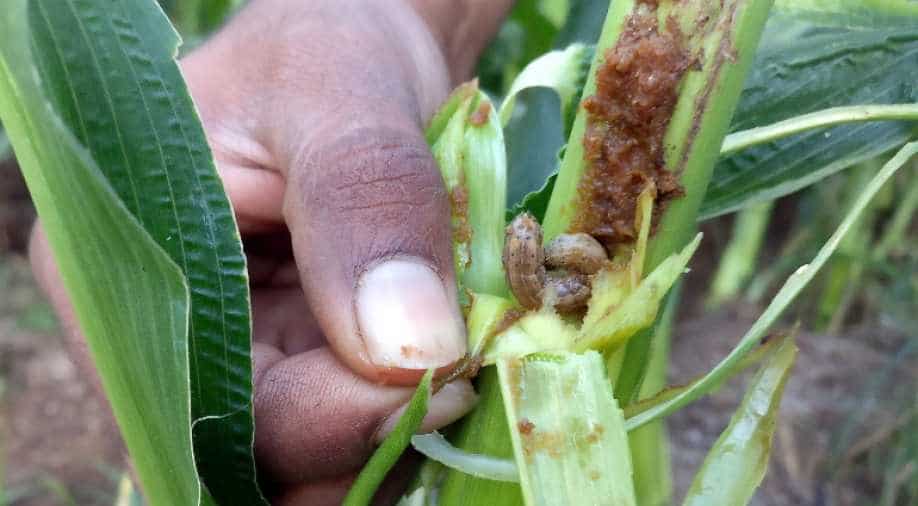 A farmer shows a corn shoot infested with fall armyworm at his farm in Narayangaon village in the western state of Maharashtra. Photograph:( Reuters )

India harvests two sets of corn crops a year, a winter crop from March and a summer crop from September.

Below-normal monsoon rains and an infestation of the fall armyworm, which devastated African crops in 2017, have slashed India's corn output and boosted prices, increasing the chances the government will grant duty-free corn imports for the first time since 2016.

The shift to imports in the world's seventh-largest corn producer, which typically exports to Asia, highlights the breadth of the crop losses due to the drought and armyworm. It also demonstrates the potential harm that the armyworm may wreak on India's agricultural economy, which supports nearly half of India's 1.3 billion people.

India harvests two sets of corn crops a year, a winter crop from March and a summer crop from September.

For the summer crop in the 2017/18 crop year ending in June, India harvested 20.24 million tonnes, according to data from the Ministry of Agriculture and Farmers' Welfare.

However, between the lower-than-normal monsoon rainfall and the armyworm infestation, summer crop output for 2018/19 crop year is forecast to drop to less than 16 million tonnes, according to Subhranil Dey, a senior research analyst at commodity brokerage SMC Comtrade Ltd in New Delhi.

"The weather wasn't good and there was the pest infestation as well," said Dey, adding that India's government will need to allow imports.

"Imports will help in bringing down prices. But the government may not allow huge imports. It will allow them to cautiously in a phased manner."

India harvested 8.47 million tonnes of winter corn in 2018, but the planted area for the winter crop this year shrank 11 per cent, according to data from the Ministry of Agriculture and Farmers' Welfare.

As a result, corn prices in the state of Maharashtra, considered the domestic benchmark, have risen by more than 30 per cent in the past two months to a record of about 20,000 rupees ($280) per tonne. That is up from 13,000 rupees a year ago.

Poultry producers and corn starch manufacturers are hopeful the shipments will rein in the price increases that they are struggling to pass on to consumers.

"We have been demanding duty-free imports of at least 500,000 tonnes. Our production cost has gone up due to the jump in corn prices," said Prasanna Pedgaonkar, general manager at Venky's, India's biggest poultry producer. Corn-based feed usually makes up two-thirds of poultry production costs.

Imports must overcome two hurdles. First, the government must agree to lift a 60 per cent import tax. Second, imports must be non-genetically modified (GM) strains as India does not allow the cultivate or import of GM crops.

India's government has allowed duty-free imports as recently as 2016 when the 181,000 tonnes were imported.

However, few countries export non-GM corn in large quantities, so finding sufficient GM-free supplies may be a challenge for traders, said Amit Sachdev, the South Asia Representative for the US Grains Council.

India's government has not decided on petitions received from importers to allow duty-free imports, said a federal government official, who asked to remain unidentified since he was not authorized to speak to the media.

The government may also delay imports until after the upcoming national elections in May to bolster the ruling party's status with farmers, said Mumbai-based trader at a global firm.

"Allowing imports just before elections may send a negative message to farmers," the trader said.

The imports will not ease the losses for farmers grappling with the infestation of fall armyworm, a voracious caterpillar in its larval stage that can spread more than 100 km (60 miles) in a night as a moth.

In 2016 and 2017, the pest ravaged corn crops in Zimbabwe, Malawi and the continent's largest producer South Africa.

The invasive species, originally from Central and North America, arrived in India only in the middle of last year after plundering Sri Lankan produce.

"By the time we identify the pest, it had damaged the crop on a large scale," says farmer Mittal Waykar, showing the infestation effects on his 1-acre (0.4-hectare) corn plot in Maharashtra.