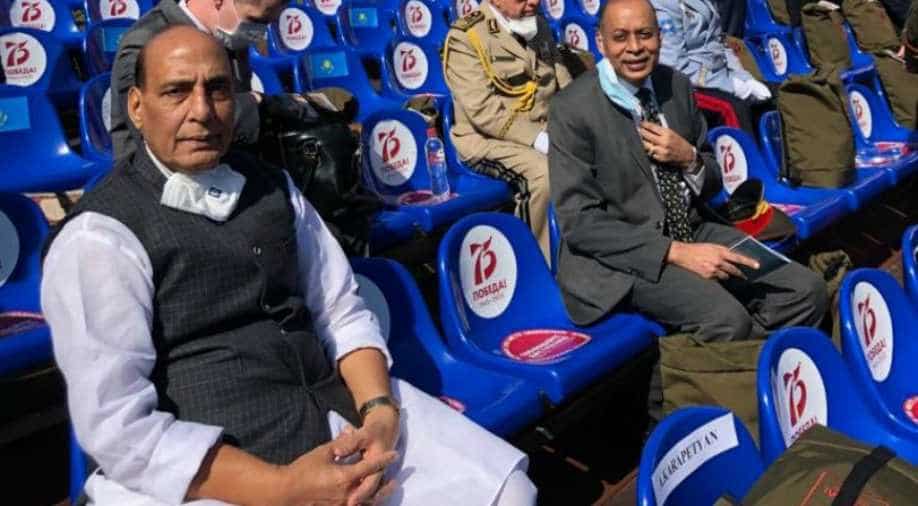 Singh arrived in Moscow on a three-day visit on Tuesday at the invitation of the Russian Ministry of Defence to attend the 75th Anniversary of Victory Day Parade.

Defence Minister Rajnath Singh on Wednesday attended the 75th Anniversary of Victory Day Parade in Moscow, where a contingent of the Indian Armed Forces was also participating.

Singh arrived in Moscow on a three-day visit on Tuesday at the invitation of the Russian Ministry of Defence to attend the 75th Anniversary of Victory Day Parade.

Singh is the first senior union minister to undertake a foreign visit in four months as international travels were restricted due to the coronavirus pandemic. He travelled by an Indian Air Force aircraft, while strictly following all laid precautions against the coronavirus infection.

Pictures showed that social distancing being maintained at the Red Square where the parade will take place.

On Tuesday, he called on Russian Deputy Prime Minister Yury Borisov and the two leaders held discussions on the bilateral relationship, regional issues, and reviewed the India-Russia defence cooperation.

Singh also conveyed his greetings for the solemn ceremonies of the 75th Victory Day and congratulated the "friendly" people of Russia, specially the veterans, who have contributed to the common security of India and Russia, an official statement said on Tuesday.

Russia postponed its military parade traditionally held on Moscow's Red Square on May 9 for a later date due to the coronavirus pandemic.

On May 26, Russian President Vladimir Putin announced that the Victory Parade would be held on Moscow's Red Square on June 24, TASS news agency reported.

He explained that this was chosen because on June 24, 1945 the legendary historic parade of victors took place, when soldiers, who fought for Moscow and defended Leningrad, who stood their ground for Stalingrad, liberated Europe and stormed Berlin, marched on Red Square.

All this happened in the wake of India China clash at the LAC border.

And despite China's growing influence in Russia, Moscow chose to not take sides.

Russian Foreign Minister, Sergei Lavrov, had said, when asked about the India China standoff: "You know, we have never had such a goal to help India and China to develop bilateral relations. They have every opportunity to solve and consider any problems that arise in relations between them, and problems arise between any countries, including, of course, in between neighbours."

Such a calibrated response seen alongside India's participation in the victory day parade is a signal -- that the India-Russia relationship remains strong.