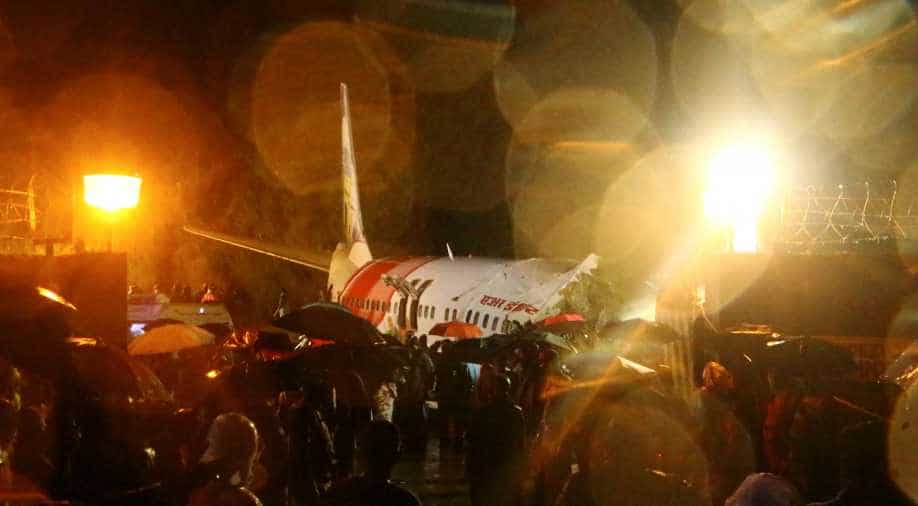 The Air India Express flight skidded off a hilltop runway and split in two while landing in heavy rain at an airport in Kozhikode on Friday evening.

The death toll in the Kozhikode plane crash has risen to at least 18, the Air India Express said on Saturday.

According to the Civil Aviation Ministry, the Boeing 737 aircraft on a flight from Dubai to Kozhikode overshot the runway at Kozhikode airport at 7.41 PM on Friday. There were 184 passengers including 10 infants, 2 pilots and 4 cabin crew on board the aircraft, the ministry added.

Captain Deepak Sathe, the pilot-in-command, and his co-pilot Akhilesh Kumar were among those who died, police and airline officials said on Friday. Sathe was a former Wing Commander of the Indian Air Force (IAF) and had served at the force's flight testing establishment.

The Air India Express flight skidded off a hilltop runway and split in two while landing in heavy rain at an airport in Kozhikode on Friday evening.

Air India Express said on Saturday that three relief flights had been arranged to Kozhikode in Kerala to assist passengers and their family members affected by the plane crash a day ago.

Members of the Emergency Response and the Special Assistance Team have been pressed into service from Cochin, Mumbai and Delhi.

He said the reasons for the crash were being investigated. He also announced Rs 10 lakh interim relief for each of the deceased, Rs 2 lakh for the seriously injured and Rs 50,000 for those who suffered minor injuries.

The black box and cockpit voice recorder have been recovered from the site, a top official at the Directorate General of Civil Aviation told Reuters on Saturday.

Also read | At least 15 dead, including pilot in plane crash at Kerala airport

Air India Express has also arranged a "special relief flight from Mumbai and Delhi" for rendering humanitarian assistance to all the passengers and their family members. It has also established a passenger information centre and a toll-free number has been made available for the family or friends of those who may have been on board flight IX-1344.

"The toll free number is 1800 2222 71. For those calling from outside, please call international country code."

"Air India Express Limited regrets to confirm that its flight IX-1344 from DXB (Dubai International Airport) to CCJ (Kozhikode International Airport) was involved in an accident on August 7, 2020 at Calicut. Our thoughts and prayers are with all the passengers and crew and their families. We would like to inform that as of now there are 17 confirmed deceased including two pilots. The four-cabin crew members are confirmed safe," the air carrier said in the statement, on early Saturday morning.

Bansal, along with senior airline officials, "rushed" to the accident site "to take stock of the situation and are being briefed by experts", Air India tweeted.

Two special relief flights have been arranged from Delhi and one from Mumbai for rendering humanitarian assistance to all the passengers and the family members, Air India Express, a wholly-owned subsidiary of the national carrier, said.

"The Emergency Response Director is coordinating with all the agencies in Calicut (Kozhikode), Mumbai as well as Delhi, Dubai for effective emergency response," it said in a statement.

The airline said its chief of operations and the chief of flight safety had already reached Kozhikode.

Expressing "deepest condolences" to the families of those who have lost their lives in the accident, aircraft manufacturer Boeing said it is in contact with the Air India team and have offered to support them in any way possible.

"Boeing is prepared to provide a technical team to assist the US National Transportation Safety Board, in accordance with ICAO Annex 13 guidelines, as The Directorate General of Civil Aviation (DGCA) of India conducts its investigation," the US-based company said.

Scheduled international passenger flights continue to remain suspended in India since March 23 due to the novel coronavirus pandemic.

However, special repatriation flights have been operated by Air India and Air India Express since May 6 under the Vande Bharat Mission to help stranded people reach their destinations.

Private carriers have also operated a certain number of flights under this mission.

Meanwhile, the Indian Consulate in Dubai remained open on Saturday to help those who need assistance to travel to Kerala and provide information about the crash.

"We are with all the families of injured and deceased and will do our best to assist them," the consulate tweeted on Friday evening.

The Indian consulates in Dubai and Sharjah have activated five helpline numbers to provide information to the family members of the deceased and the injured passengers.