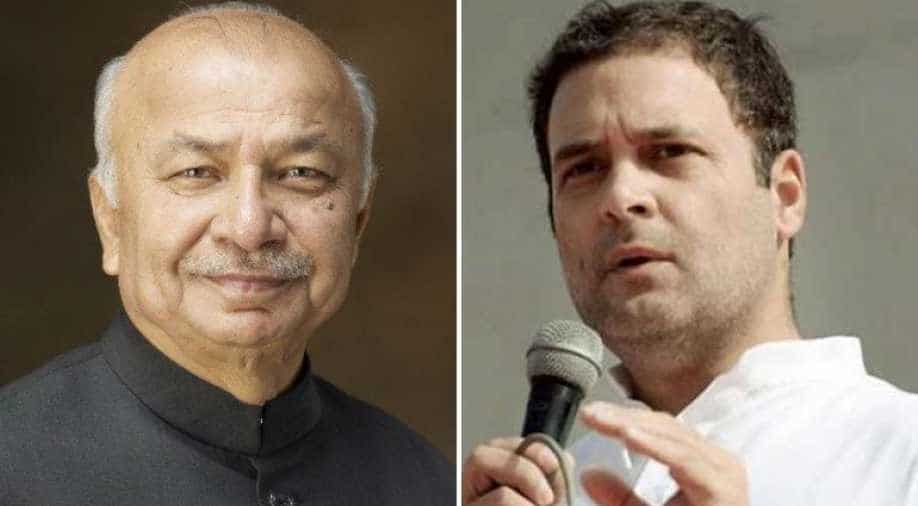 As a last-ditch move, Congress chief ministers are meeting Rahul Gandhi to impress upon him that he should continue as the president of the party.

Apart from the drama of absurd which Congress party may witness on Tuesday, Congress Working Committee (CWC) is all set to meet either on Wednesday or Thursday to discuss the future of the party.

Despite young office holders planning to go in an indefinite strike in AICC to persuade Rahul Gandhi to remain as Congress president, two names have emerged as front runners for the position of the party president.

Two names are - former home minister Sushil Kumar Shinde and former leader of Congress in Lok Sabha Mallikarjun Kharge. Though Shinde lost the elections and also came under political storm because of the saffron terror controversy, he remains a Gandhi loyalist.

Shinde has also served in various positions in his forty-year career which includes the position of a governor and union minister. Mallikarjun Kharge's too is a very senior leader who started his career in 1972 but his stint at the Centre started in 2014 when he was appointed as the leader of the Congress Parliamentary Party in Lok Sabha.

As a last-ditch move, Congress chief ministers are meeting Rahul Gandhi to impress upon him that he should continue as the president of the party.

Sources also say that Rahul Gandhi remains firm on his decision and may join his sister Priyanka Gandhi Vadra with his mother Sonia Gandhi by end of the week in the United States where Robert Vadra is undergoing surgery.

It is a matter of debate as to what will happen inside the Congress Working Committee, but senior leaders have confirmed that the only way to end the crisis in the party is to convene the CWC. Only the CWC can pass a resolution for a particular person, as the name can only be ratified by the AICC. As per the rule, senior most general secretary of AICC can convene a CWC in the absence of a president.

Meanwhile, in a related development, an open rift has opened between junior and senior leaders. A source in the Congress confirmed that leaders going on protest have been told that they must not name senior leaders from the podium to resign. A point to be noted is that as of now no senior leader, CWC member or chief minister has offered to resign.