Ahead of elections in Chhattisgarh, Congress MLA joins ruling BJP 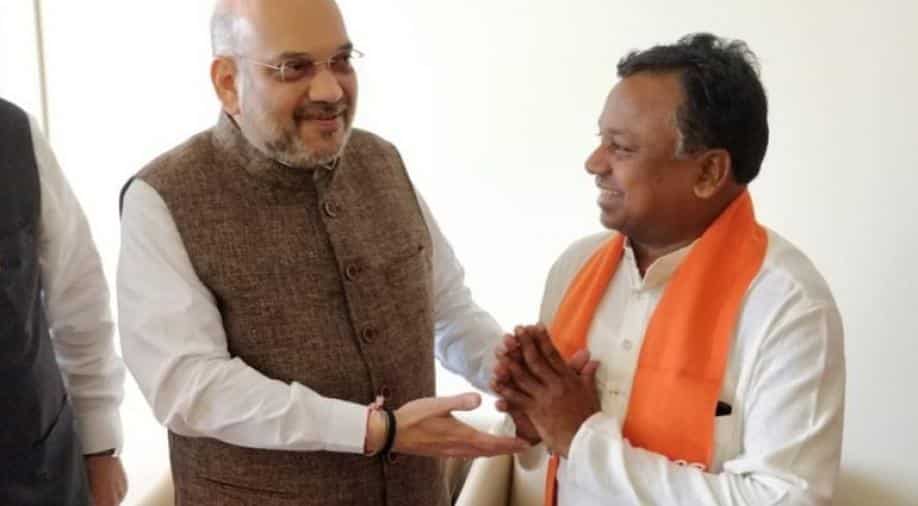 Uike, who represents Pali-Tanakhar constituency, joined the BJP in the presence of the party chief Amit Shah and Chief Minister Raman Singh in Bilaspur district headquarter.

Uike, considered a popular tribal leader in Bilaspur division, said he was feeling suffocated in the Congress as Scheduled Tribes (ST) leaders were being neglected by the party leadership.

In a major setback to the opposition Congress in poll-bound Chhattisgarh, its state working president and MLA Ramdayal Uike Saturday joined the ruling BJP.

Uike, who represents Pali-Tanakhar constituency, joined the BJP in the presence of the party chief Amit Shah and Chief Minister Raman Singh in Bilaspur district headquarter.

Uike, considered a popular tribal leader in Bilaspur division, said he was feeling suffocated in the Congress as Scheduled Tribes (ST) leaders were being neglected by the party leadership.

In a press conference held in Bilaspur in the presence of the chief minister as well BJP state unit president Dharamlal Kaushik, he announced that he joined the BJP.

"I had been feeling suffocated in Congress for the last several years. Congress has diverted from its ideology and principles. The CD politics of Congress has tarnished its image. State Congress chief Bhupesh Baghel has maligned the image of the party by encouraging the obscene CD politics," he said.

Uike was apparently referring to a case of circulation of a 'sex CD' purportedly featuring a state minister, in which Baghel was named as one of the five accused.

He further said his party high command did not pay attention to his demand to remove Baghel from the post of state unit president.

"Congress has neglected the interests of tribals, backward and poor people and I was pained over it as I represent a tribal region.

"CM Raman Singh has been making efforts for overall development of tribals and backward people and his development oriented policies have impressed me to rejoin my home party," he said.

Uike, who had quit the BJP and joined the Congress in 2000, described his return to the ruling party as "ghar wapsi".

When asked about contesting elections, he said he will follow the directions of the party leadership in this regard.

Reacting to the development, Congress dubbed Uike as an "opportunist" and said his decision will not harm the opposition party.

"Uike has gone back to BJP, which he had left earlier for opportunistic reasons. He has again proved that he is an opportunist," Congress state communication wing chief Shailesh Nitin Trivedi told PTI.

"His decision is not going to harm Congress in any way as history is witness that the party in which Uike was there it had never won. In fact we are thankful to Uike that he has left our party and ensured victory to us," Trivedi said.

After the formation of Chhattisgarh in 2000, Uike who was a BJP MLA from Marwahi seat had joined Congress and vacated his seat to facilitate the entry of Ajit Jogi into the Chhattisgarh Legislative Assembly after he was sworn-in as first Chief Minister of Chhattisgarh.

According to BJP sources, Uike was not happy after he was ousted from the Congress screening committee and since then he had been in touch with ruling party leadership.

The BJP may field Uike either from Marwahi or Pali Tanakhar - the ST reserved seats, both considered as his stronghold.