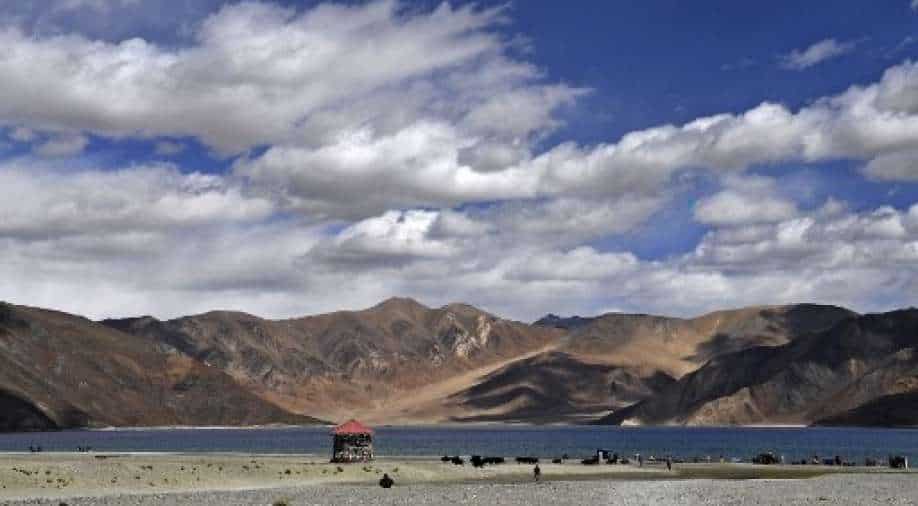 North and south bank of the Pangong Lake Photograph:( AFP )

China continues to be in illegal occupation of approximately 38,000 sq kms of Indian territory in the Union Territory of Ladakh for the last six decades

Amid continued tensions with China along the Line of Actual Control(LAC) in eastern Ladakh, the Indian government told Parliament that China has been building a bridge on Pangong lake which it said was "constructed in areas that have continued to be under the illegal occupation of China since 1962."

On the ongoing talks with China in eastern Ladakh, the minister said it is being guided by three key principles - "both sides should strictly respect and observe the LAC, neither side should attempt to alter the status quo unilaterally and all agreements between the two sides must be fully abided by in their entirety."

"The government has made it clear on several occasions that the Union Territories of Jammu and Kashmir and Ladakh are an integral part of India and we expect other countries to respect India's sovereignty and territorial integrity," the minister added.

Also Read in Pics: In dogfight over Himalayas between India's Rafale vs China's J-20 stealth fighter, who wins?

"China continues to be in illegal occupation of approximately 38,000 sq kms of Indian territory in the Union Territory of Ladakh for the last six decades," the minister said in a written reply to a question in India's lower house of parliament.

"Further, under the so-called China-Pakistan 'Boundary Agreement' signed in 1963, Pakistan illegally ceded 5,180 sq kms of Indian territory in Shaksgam Valley from areas illegally occupied by Pakistan in Union Territory of Ladakh to China," Muraleedharan said, adding, "The fact that the entire Union Territories of Jammu & Kashmir and Ladakh are an integral and inalienable part of India has been clearly conveyed to Pakistani and Chinese authorities several times."

The minister added that India has never recognised the so-called China-Pakistan "Boundary Agreement" of 1963, calling it "illegal" and "invalid".

On reports suggesting China has been renaming some places in India's Arunachal Pradesh state, the minister said it was a "futile exercise" while adding that the state "has always been, is and will always be an integral part of India".

The government told parliament that it intends to improve infrastructure along the border areas to facilitate economic development and is taking necessary steps to ensure India's security interests are protected.