CDS Bipin Rawat's funeral: Last rites of the General and his wife to be held at Delhi Cantonment crematorium 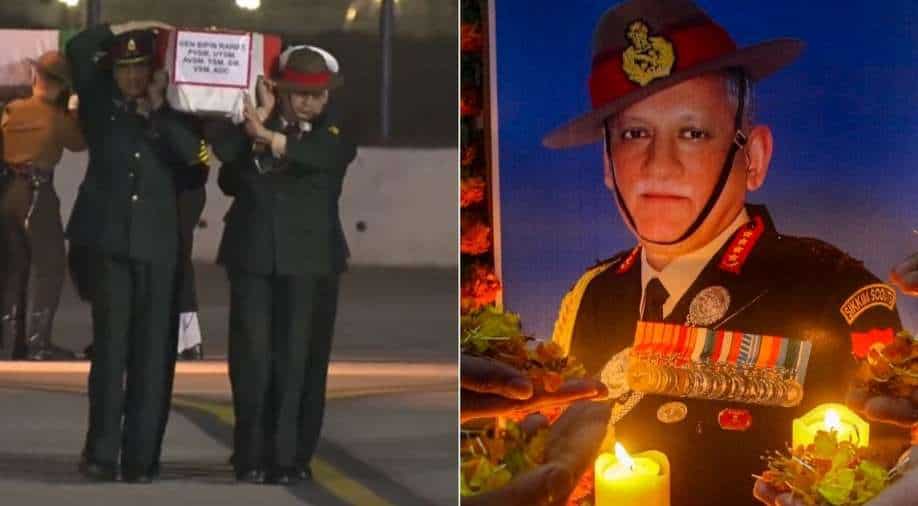 The mortal remains of CDS General Bipin Rawat who lost his life in Tamil Nadu chopper crash yesterday, being brought out of IAF aircraft that arrived at Palam airbase from Sulur. Photograph:( Agencies )

The funeral of General Bipin Rawat, who died along with his wife Madhulika Rawat and 11 other personnel of the armed forces in an air accident this week, will take place on Friday at 4pm.

India's first Chief of Defence Staff General Bipin Rawat and his wife, Madhulika Rawat, who were among 13 people killed in a helicopter crash in Tamil Nadu on Wednesday, will be cremated today at the Brar Square crematorium in Delhi Cantonment.

The funeral will be held at 4 p.m. on Friday.

From 11 a.m. to 12:30 p.m., the army couple's bodies will be kept at their 3 Kamaraj Marg residence for people to pay their final respects.

Military personnel are allowed to pay their respects between 12:30 and 1:30 p.m., with the last journey to the Brar Square crematorium in Delhi Cantonment beginning at about 2 p.m.

At 2 p.m., the bodies of General Rawat and his wife, Madhulika Rawat, will be taken to the crematorium.

The General will be given a funeral with full military honours.

Prime Minister Narendra Modi led tributes to those slain in the helicopter tragedy on Thursday night.

Watch | Mortal remains of General Bipin Rawat and others arrives in capital, last rites to be held today

The Mi-17V5 Air Force chopper carrying Gen Rawat, dubbed "the workhorse of the Air Force" and largely regarded as a reliable aircraft, crashed shortly after taking off from Sulur.

Meanwhile, the Indian hill city where General Bipin Rawat's chopper crashed is in mourning and has declared a voluntary shutdown to pay tribute.

The hill station's shops, hotels, commercial establishments, and non-essential services are closed for a day to mourn the loss of India's Chief of Defence Staff, General Bipin Rawat, his wife, and other defence officials in a deadly helicopter crash over 48 hours ago.

The Nilgiris district in Tamil Nadu, India, is home to a million people and is mostly supported by its thriving tourism and hotel industry.