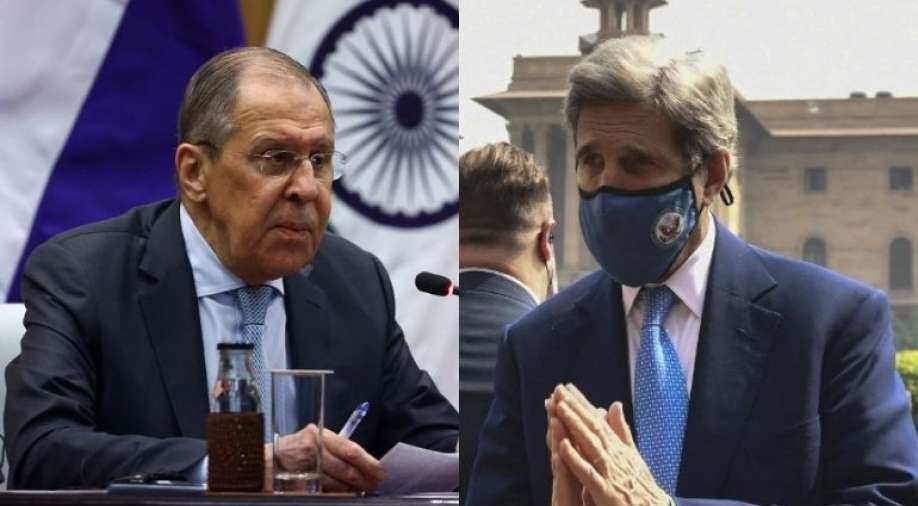 World leaders are actively engaging with India. This is turning out to be the summer of high profile engagements

It was a hectic day for Indian diplomats as the country was hosting two high-profile leaders on the same day, Russian Foreign Minister Sergey Lavrov and US special envoy for climate John Kerry.

What makes this all the more crucial is the dynamics between Russia and the US. They are arch enemies. Their presidents call each other names but, their top diplomats were in New Delhi at the same time. Was this a coincidence? Possibly but, we're not surprised that their schedules overlapped.

World leaders are actively engaging with India. This is turning out to be the summer of high profile engagements.

Let's look at what happened today. Sergey Lavrov and John Kerry arrived in India's national capital on Monday. Both of them are on different missions. The Russian Foreign Minister was here to prepare the ground for an annual summit that will be held later this year. John Kerry was meeting different stakeholders to discuss climate goals. Let's start with the Russian mission.

India and Russia vowed to deepen their defence cooperation. They are looking for ways to expand the production of Russian weapons in India and this despite, the threat of American sanctions.

There's no clarity yet. More importantly, no assurance from Washington that Delhi won't face sanctions. As for Delhi and Moscow, they say they remain committed to strong defence ties.

The other elephant in the room was China. Lavrov said Russia is watching the border situation in Ladakh. He addressed a joint press conference with India's S Jaishankar.

He was asked a pointed question. Is Russia working on a military alliance with China?

He said no but went on to speak about another military alliance in the region, the Quad.

India's position is clear. It will not engage in a Nato-like military alliance with the Quad and that's the challenge for Delhi, striking the right balance between Russia and the Quad.

Meanwhile, Lavrov has already left India and landed in Pakistan, that's his next destination and that makes the India-Russia equation more intriguing.

Meanwhile, John Kerry, the US special envoy, is going to be in India for four days and he's not going to Pakistan. US President Joe Biden has appointed Kerry as his special envoy on the climate crisis.

What does this mean? It means that US has put climate change on a par with national security priorities. So, what is Kerry doing in India?

The purpose was to get India to commit on climate action, and to cut back on the use of fossil fuels.

Remember, India too has been at the forefront of climate action and sustainable development goals.

Joe Biden has now formed an alliance of like-minded countries to take this forward. Kerry was all praises for India.

Calling India a world leader in deployment of renewable energy, Kerry said India is setting a 'very strong example' for other nations. So, that's how the day panned out for Sergey Lavrov and John Kerry.

You may be wondering if their paths crossed. Did Lavrov and Kerry meet in New Delhi? The answer is yes, they did!

They were staying in the same hotel. They met in the lobby. What did they talk about? Climate change. That's what the Russians have told the press. The Americans are much more guarded about this engagement. The US embassy in Delhi said the leaders 'ran into each other by happenstance’. Believe what you will.  We'll give you a short backgrounder. When John Kerry was the US secretary of state in the Obama era, there was a lot of talk about the 'bromance' between him and Lavrov.

On several occasions, the leaders have exchanged gifts too. Once Kerry had gifted Lavrov two potatoes from Idaho. Why? Because the Russian Foreign Minister had mentioned them in an earlier conversation. Then, Lavrov had returned the favour with some tomatoes from Sochi.

He had even gifted a T-shirt to Kerry with symbols of victory. That was almost six years back. Now, their presidents are hurling abuses at each other. But why should that stop them from a quick catch-up in New Delhi?

Under PM Modi India 'more likely' to respond with force to Pakistani provocation: US intelligence report