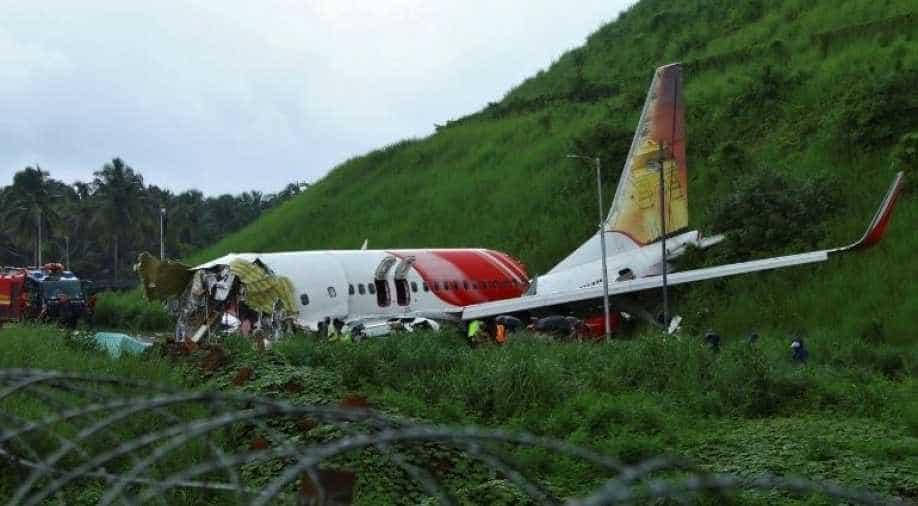 Officials inspect the site where a passenger plane crashed when it overshot the runway at the Calicut International Airport in Karipur, in the southern state of Kerala, India Photograph:( Reuters )

The Boeing 737, on a special flight from Dubai to bring back Indians stranded by the coronavirus pandemic, overshot the runway at Kozhikode in Kerala state, plunged down an embankment and broke up.

Speaking at a news conference, Puri said the black boxes containing the data had been retrieved as he urged people not to speculate about what caused Friday's deadly crash.

The news of the black boxes' recovery came as the family of the plane's pilot Deepak Sathe, who was killed in the accident along with the co-pilot Akhilesh Sharma, gathered together in their home state of Maharashtra.

The death toll from the Air India plane crash accident rose to 18, with 16 people seriously injured, a senior government official said on Saturday.

The Boeing 737, on a special flight from Dubai to bring back Indians stranded by the coronavirus pandemic, overshot the runway at Kozhikode in Kerala state, plunged down an embankment and broke up.

"Fuel had leaked out so it was a miracle that the plane did not catch fire, the toll could have been much higher," one senior emergency official at the scene said.

Aviation minister Hardeep Singh Puri visited the site Saturday and announced that the flight data and cockpit voice recorders had been found, which will help the investigation into the cause of the crash.

The Aircraft Accident Investigation Bureau was conducting the probe, he said.

Kozhikode is considered a tricky airport as it has a table-top runway with a steep drop at one end.

Kerala has been hit by severe floods in recent days and heavy rains had been falling for several hours at Kozhikode as the jet landed.