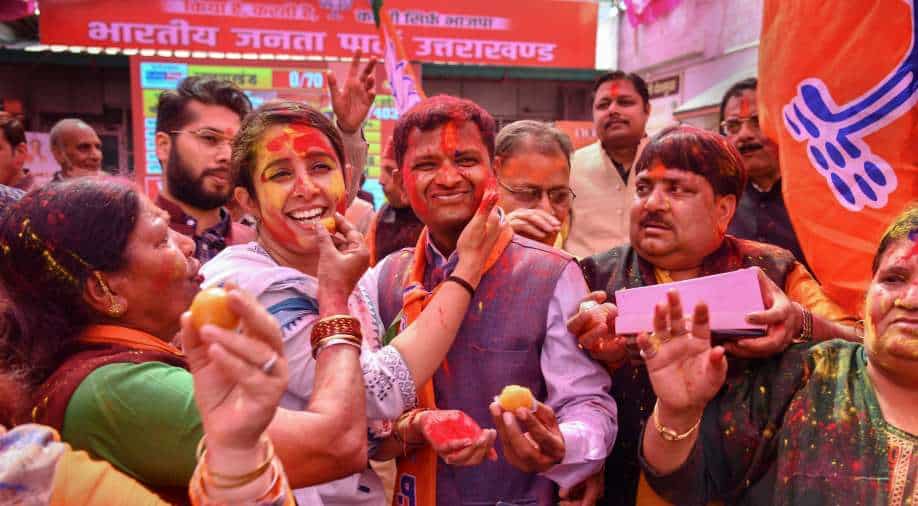 The BJP has won 31 seats and is leading in 16 out of the total 70 seats till 6.30 PM, belying pollsters who had predicted a close race between the ruling party and the Congress

The BJP headed for a second consecutive victory in Uttarakhand on Thursday, breaking the trend of the hill state voting out the ruling party, but Chief Minister Pushkar Singh Dhami lost from the Khatima assembly constituency.

The BJP has won 31 seats and is leading in 16 out of the total 70 seats till 6.30 PM, belying pollsters who had predicted a close race between the ruling party and the Congress, which has bagged 12 seats and is ahead in seven. The BSP has won one seat and was leading in another while Independents were leading in two.

The Aam Aadmi Party which had promised a number of freebies has not opened its account despite fielding candidates from all the 70 seats.

The defeat of Dhami who led the BJP's campaign against the Congress in the state throws up a big question before the saffron party on the issue of choosing the next chief minister.

The Congress had targeted the BJP for changing chief ministers twice in a short span, accusing it of causing "political instability" and betraying the people.

The opposition party, plagued by infighting, failed in its mission to dislodge the BJP and avenge its rout in 2017 assembly polls where it had won just 11 seats against the BJP's 57.

Though throwing a spirited challenge to the BJP as the Congress' poll campaign head for the state, Rawat could not pilot the party's return to power and was himself trailing Mohan Singh Bisht of the BJP in Lalkuwa by over 17,000 votes.

AAP's chief ministerial candidate Colonel Ajay Kothiyal was trailing on Gangotri seat where the main fight remains between the BJP and the Congress.

Delhi Chief Minister Arvind Kejriwal and his deputy Manish Sisodia had made several visits to the state during the run-up to the polls promising free electricity up to 300 units to every household, an unemployment allowance, a monthly allowance to women aged above 18 years and free pilgrimage to the elderly among Hindus, Muslims and Sikhs to Ayodhya, Ajmer Sharif and Kartarpur Sahib.

Political pundits attributed the BJP's impressive poll showing in Uttarakhand to the Narendra Modi factor above everything else.

"The double engine factor also worked in favour of the saffron party as people apparently felt it was necessary for the continued development of the state with Modi going to be at the helm in New Delhi till at least 2024," he said.

The state also saw the revival of BSP which had drawn a blank in the 2017 polls.

Rawat admitted that the Congress had failed to win the trust of the people.

"However, with an increased mandate we have been given the task of playing the role of the main opposition to which we will do justice," he told reporters.