Argentine President Macri to visit India from February 17 to 19 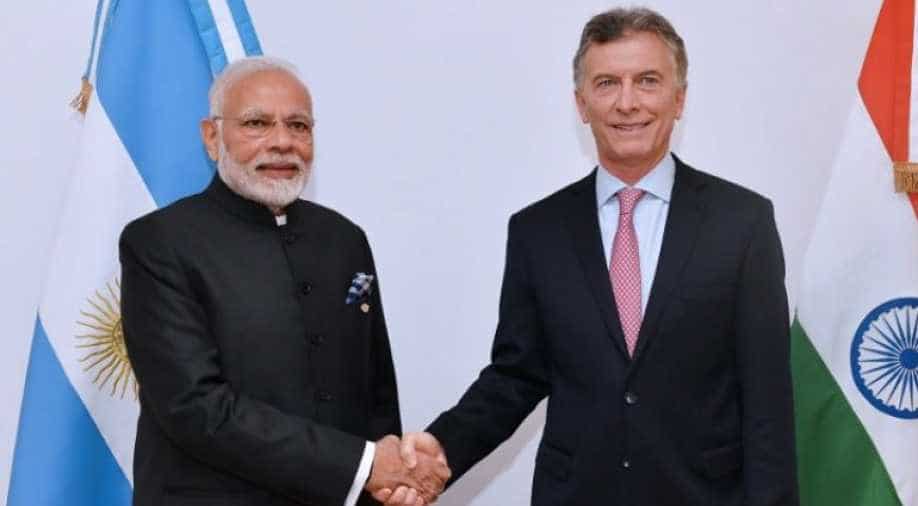 The visit comes at a time when the both countries are celebrating the 70th year of the establishment of diplomatic ties between India and Argentina.

Argentina's President Mauricio Macri will be in India from Sunday on a 3-day visit that will end on Tuesday. The Argentine President will be accompanied by Argentina's First Lady Juliana Awada, Chamber of Deputies Speaker, Emilio Monzo and Foreign Minister Jorge Faurie, among other officials.

The visit comes at a time when both the countries are celebrating the 70th year of the establishment of diplomatic ties between India and Argentina.

The Ministry of External Affairs in a statement said, "This visit will provide an opportunity to both sides to review progress in bilateral ties and to explore new avenues of cooperation".

Ahead of the visit, Argentina's envoy to India Daniel Chuburu spoke to WION and said, "We are good friends with India and have worked politically for many many years in a lot of different places, we firmly believe, the potential our relations can achieve is not being done."

"We are at the disposal of India to share any kind of and all the experience we have. It's the job you do in the whole year, the summit is just last expression. India will do it pretty well, you have a lot of experience. There will be no problem", Chuburu said.

There may be some special declaration on Pulwama attacks by the Argentine President during his India visit.

On Sunday, he will visit Agra while Monday will be the main day of engagement when he will meet Prime Minister Modi and President Ram Nath Kovind. He will end his visit in Mumbai on February 19.

Bilateral trade between both the countries at present is around $3 billion with India exporting two-wheelers, iron and steel, agrochemicals, yarn, organic chemicals, bulk drugs and drug intermediates and motor vehicles to the South American country. Argentina's exports to India has been mainly vegetable oils, finished leather, cereals, residual chemicals and allied products and pulses.

Several Indian companies have invested in IT, agro-chemical, pharmaceutical and cosmetic sectors in Argentina; total Indian investments stand at $1 billion.