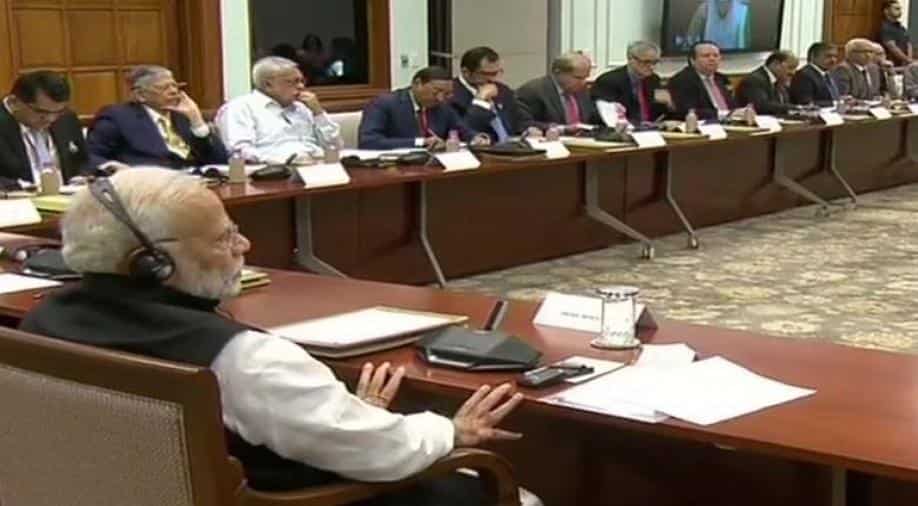 CEOs and Experts from the Oil and Gas sector, from both India and abroad, in the meeting with Prime Minister Narendra Modi Photograph:( ANI )

He also noted that the oil market was producer driven and both the quantity and prices are determined by the oil-producing countries.

Amid the rising fuel price in the country, Prime Minister Modi on Monday held a meeting with CEOs and experts from the Oil and Gas sector from both India and abroad.

He also noted that the oil market was producer driven and both the quantity and prices are determined by the oil-producing countries.

PM Modi added that though there was enough production, the unique features of marketing in the oil sector had pushed up the oil prices.

He also emphasised that the cooperation of oil-producing countries would be very critical to bridging this gap.

The prime minister also noted the significant positioning of India in the oil and gas market and said the oil market was producer driven and quantity and prices were determined by oil-producing countries.

He also asked the oil producers like Saudi Arabia to initiate steps to bring down rates to reasonable levels.

He said the consumer pain was heard loud and clear from the prime minister.

Falih added that the "pain" would have been "much louder" but the action by Saudi Arabia to invest in creating spare capacity has used to lessen price shocks.

"Prime minister cautioned producers like myself not to kill hen that lays golden egg, he said referring to consumers are the golden hen," Al-Falih added.

On technology, PM Modi appealed for assistance in areas where high pressure and high-temperature technology applications are relevant to commercial exploitation of natural gas.

He also requested for review of payment terms so as to provide temporary relief to the local currency.

Speaking at the event Union Minister Dharmendra Pradhan at India Energy Forum in New Delhi said, "Energy today is a global industry and oil is truly a global commodity. Hence our engagements with global energy community has to be continuous to address the challenges of transition in energy for a secured energy future".

Global CEOs and Experts appreciated steps taken by Government over last four years, for ease of doing business and specifically in energy sector in India. Experts made special mention of India’s competitive ranking from upstream investment point of view which has gone up from 56 to 44, ANI reported.

#WATCH Under PM Modi's stewardship, doing business in India has become significantly easier. FDI has grown and inflation is under https://t.co/N8evHq6gNi other words, PM Modi is making good of his promise of 'Acche Din': Saudi Arabia Energy Minister Khalid A. Al-Falih pic.twitter.com/4KmB32EAJU

This was PM Modi's third meeting to revive investment in oil and gas exploration and production.

Modi's first meeting was on January 5, 2016, where suggestions for reforming natural gas prices were made. More than a year later, the government allowed higher natural gas price for yet-to-be-produced fields in difficult areas like deep sea.

In the last edition in October 2017, suggestions were made for giving out equity to foreign and private companies in producing oil and gas fields of state-owned ONGC and OIL. But the plan could not go through in view of strong opposition from Oil and Natural Gas Corp (ONGC).

The government is looking at private investment to raise domestic oil and gas production, which has stagnated for the last few years while fuel demand has been rising by 5-6 per cent annually.

India is dependent on imports to meet 83 per cent of its demand and more than half of its natural gas requirements.

The Prime Minister in 2015 had set a target of reducing India's oil dependence by 10 per cent to 67 per cent (based on import dependence of 77 per cent in 2014-15) by 2022. Import dependence has only increased since then and the government is now looking for ways to raise domestic output.