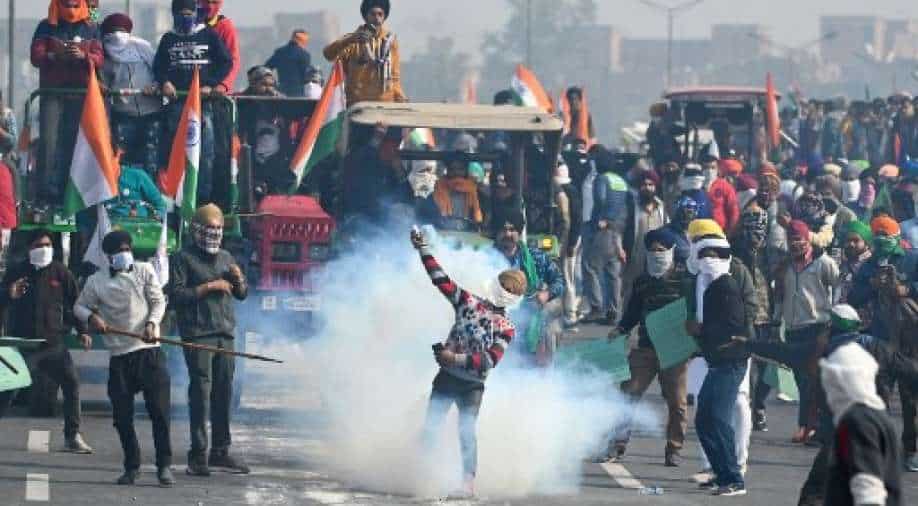 Farmers clash with police during a tractor rally in New Delhi on January 26 Photograph:( AFP )

The vandals in Italy took videos and used them to spread propaganda on social media. India has conveyed its concerns about this incident to italian authorities

As the farmer's tractor rally in New Delhi got hijacked by rioters, 5,000 kilometres away in Italy, the Indian embassy was vandalised. The attack took place just ahead of the Republic Day celebrations. Khalistani elements were behind it. The embassy was vandalised and words like 'Khalistan Zindabad' were written on the walls. The vandalism was carried out at night. Khalistan posters and flags were tied to the gate of the Indian embassy

The vandals took videos and used them to spread propaganda on social media. India has conveyed its concerns about this incident to italian authorities. It has reminded them that 'the safety and security of Indian diplomats & diplomatic premises is the responsibility of italian authorities'. At the same time it has expressed confidence that 'the Italian authorities will take action against the perpetrators and prevent such incidents from happening in the future.'

9,000 km away, Khalistan supporters gathered outside the Indian embassy in Washington DC. Many in the crowd held saffron-coloured Khalistani flags and chanted anti-India slogans.

New Delhi has constantly been raising its concerns with western governments regarding Khalistani activities. Most of which are carried out by outlawed groups like Sikhs for Justice or SFJ

In July 2019, this group was banned by India for its unlawful association with Khalistani separatists. But SFJ & its subsidiaries are still quite active in western countries.

In December last year, a protest in solidarity with Indian farmers was held outside the Indian High Commission in London. Some 4,000 people turned up. Many were seen carrying Khalistani flags. This included known Khalistanis like Paramjeet Singh Pamma of the SFJ, and Kuldeep Singh Chahehru of the Federation of Sikh organisation.

From London, to Washington to Rome, Khalistani elements have waded into the farmer's movement to serve their own interest