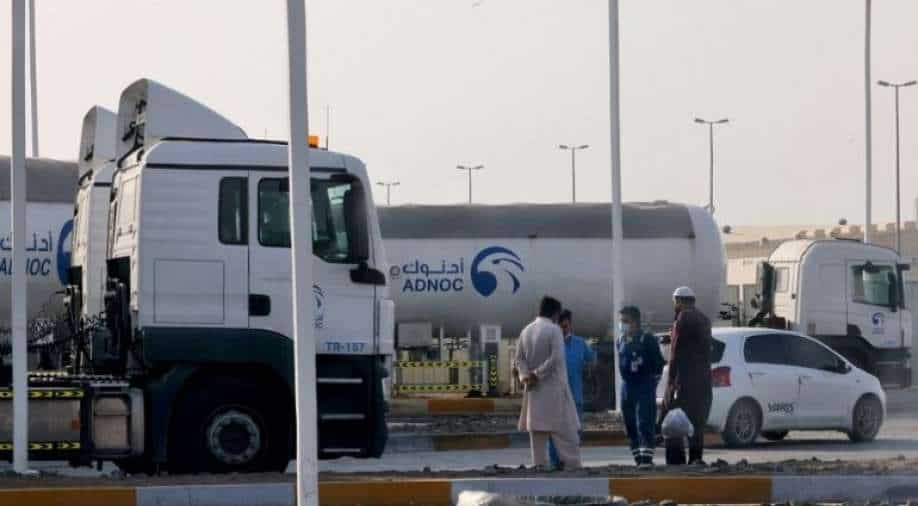 Men stand outside a storage facility of oil giant ADNOC in the capital of the United Arab Emirates, Abu Dhabi, on January 17, 2022. Photograph:( AFP )

During the call, UAE FM "expressed condolences for the Indian lives lost in the terror attack in the UAE yesterday," said a tweet-statement by EAM, adding that New Delhi "conveyed our strong solidarity with the UAE in the face of such unacceptable acts."

Deeply appreciate receiving a call from UAE FM @ABZayed . He expressed condolences for the Indian lives lost in the terror attack in UAE yesterday.

Conveyed our strong solidarity with UAE in face of such unacceptable acts.

This is the second time Indians have become collateral targets in attacks mounted by houthis against UAE interests.

On January 3, Houthis hijacked a UAE-flagged vessel that had 7 crew members who were Indian nationals, out of the 11 onboard.

The Indian mission in Abu Dabhi has identified the two nationals and has reached out to their family members. In coordination with local authorities, the mission is working on the early repatriation of mortal remains.

*17 January incident UPDATE* Identities of 2 deceased Indian nationals established. @IndembAbuDhabi officials are in touch with their family members.The Mission is working closely with UAE authorities, including ADNOC, for early repatriation of mortal remains (1/2)

The Abu Dhabi attack comes even as Yemen's civil war spills over after a failed intervention by Saudi Arabia, leading a coalition of nine countries.

The UAE, which has been part of the coalition, has said that the country "reserves the right to respond" to these terrorist attacks and criminal escalation.

Meanwhile, several countries have joined in to condemn the incident. Nepal and Bangladesh earlier condemned the attack.

Yesterday, the US, Morocco, Greece, Saudi Arabia, Kuwait, Jordan, France, Sudan, Mauritania, Bahrain, Oman, and the UN condemned the attack perpetrated by Houthis rebels that also killed one Pakistani national and injured six in all.