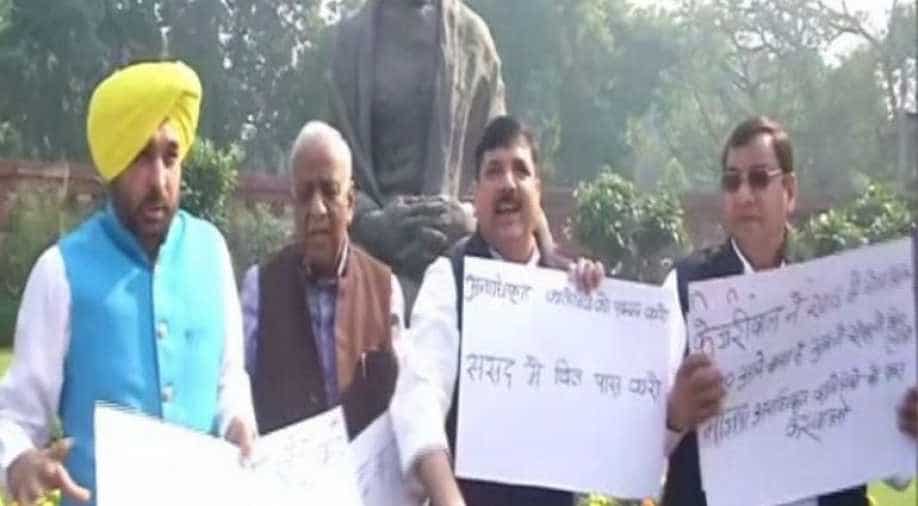 The protest was led by AAP MP Sanjay Singh along with other party lawmakers including Bhagwant Mann who raised slogans against the Centre.

Aam Aadmi Party (AAP) on Wednesday protested in front of the Gandhi statue in the Parliament, demanding to bring a bill on the unauthorised colonies in this winter session.

The protest was led by AAP MP Sanjay Singh along with other party lawmakers including Bhagwant Mann who raised slogans against the Centre while holding placards in their hands.

"The Centre has given a list of 27 Bills mentioned in the list of business to be transacted in the winter session. In the list, there is no mention of the bill regarding people of the unauthorised colonies immediately getting registry papers and ownership rights from the Centre," Singh told ANI.

Earlier this month, Prime Minister Narendra Modi had said that the Central government will diligently complete the work of transferring ownership rights to the 40 lakh people living in unauthorised colonies in the national capital and a bill will be brought in the winter session of Parliament.

"The government will complete the work with utmost responsibility," Modi had said addressing a gathering of BJP leaders along with Resident Welfare Association (RWA) officeholders and members of unauthorised colonies.

Information and Broadcasting Minister Prakash Javadekar, announcing the move, had said that the decision will benefit more than 40 lakh residents of unauthorised colonies spread over around 175 sq km as development and redevelopment can now take place in these colonies resulting in a clean, secure and healthy living environment.

The decision is applicable to 1,797 identified unauthorised colonies that are inhabited by lower-income groups and does not apply to 69 affluent colonies identified by DDA including Sainik Farms, Mahendru Enclave and Anant Ram Dairy.

The Winter Session of the Parliament began on November 18 and will continue till December 13.