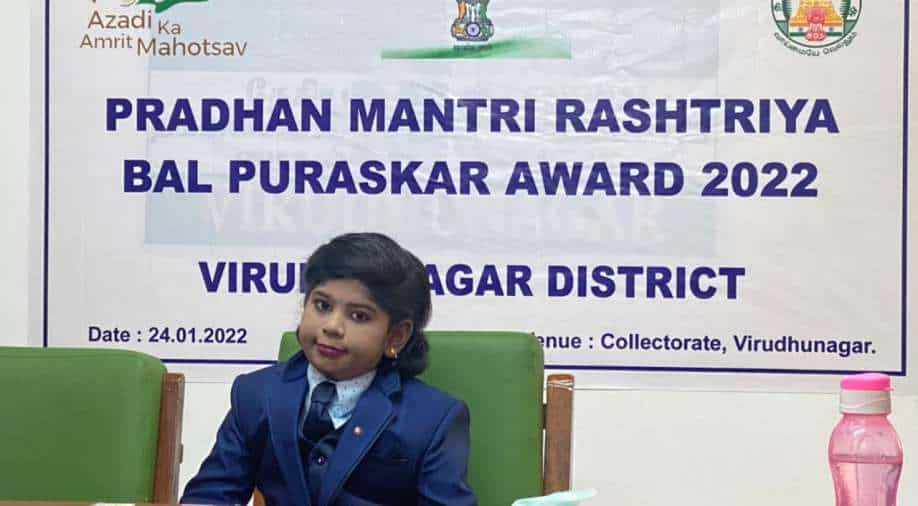 The 10-feet-long inflatable pool at her home led her to conceptualise an automatic inflatable flood shelter, which her parents helped design, prototype and patent.

Inflatable swimming pools are a source of immense enjoyment for little children, but for 8-year-old Vishalini, it has been a source of inspiration.

The 10-feet-long inflatable pool at her home led her to conceptualise an automatic inflatable flood shelter, which her parents helped design, prototype and patent.

Besides the patent that the trio hold, the little girl has also been awarded the Pradhan Mantri Rashtriya Bal Puraskar Award (PMRBP).

The coveted award is conferred by the Government of India to give recognition to children with exceptional abilities and outstanding achievements in the fields of innovation, scholastic achievements, social service, arts and culture and sports

“About two years ago, we were watching some TV news regarding flooding. Looking at the widespread damage caused, our daughter asked - 'Why can't people save themselves by using something like our inflatable pool?’ This sparked an idea in our minds and we deliberated upon it and improvised. That's how the concept came into being" Naresh, a PhD holder, engineering professor and Vishalini's father, told WION.

8yr old Vishalini, a 2nd std student explains how she came up with the idea of an inflatable flood shelter, when watching TV news about floods. Her family has patented their concept and have a mini prototype

As per the design specifications, the shelter has provisions for seating up to 4 persons, it has seat belts, a first aid kit, storage for essential items etc.

It is powered by a solar panel, and also features like GPS and GSM connectivity for enabling communication and location tracking, besides a host of sensors.

Simply put, it's like an inflatable pool with a cover that automatically expands itself once the need arises. However, instead of holding water, it is meant to protect people from a deluge.

When asked how the floating structure could function in fast-flowing floodwaters, Naresh explained that it could be tethered to firm structures or anchored. When required, it is also meant for short distances in the floodwaters.

Patented as an ‘automatic multi-functional life rescue flood house’, the shelter currently exists only in a miniature prototype firm.

According to Naresh, the latest recognition for their daughter from the Indian government and the monetary reward of Rs1 lakh (US $ 1,330 approx.) has invigorated the family's efforts towards contributing to the nation and getting a working model ready.