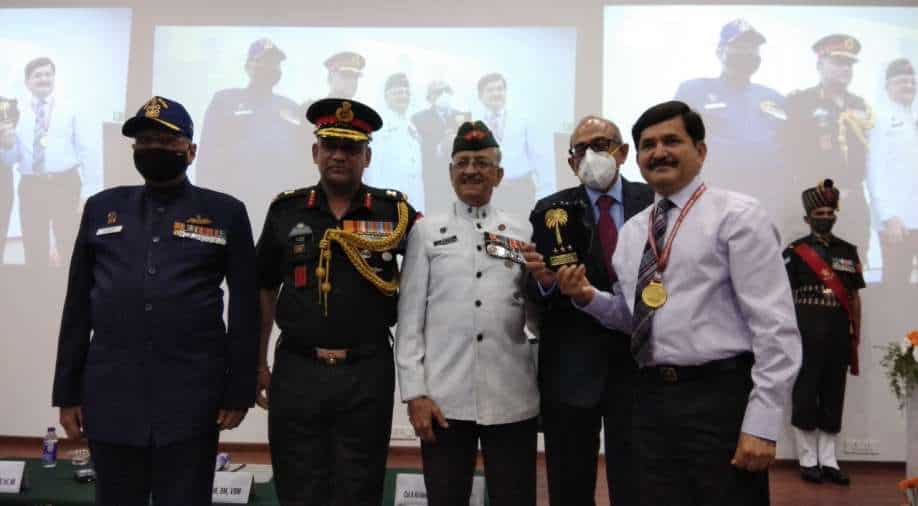 NDA coursemates and Vir Chakra awardees Col A. Krishnaswami and Rear Admiral Ramsagar recalled their experience of being in the thick of action in the 1971 war and their acts of gallantry.

To land an aircraft onto the deck of a moving aircraft carrier is a highly acclaimed feat in military aviation, doing so while flying a damaged aircraft is almost fictional.

Going behind enemy lines is rare, but imagine laying ambushes in enemy territory, despite being outnumbered. India’s war veterans did these and many such feats of daredevilry to liberate Bangladesh(then East Pakistan).

NDA coursemates and Vir Chakra awardees Col A. Krishnaswami and Rear Admiral Ramsagar recalled their experience of being in the thick of action in the 1971 war and their acts of gallantry.

They were in conversation with Lt. Gen. A.Arun, General-Officer-in-Command(GOC) Dakshin Bharat Area at a special event hosted at Madras Management Association, Chennai. The event was hosted as a part of the Swarnim Vijay Varsh celebrations. 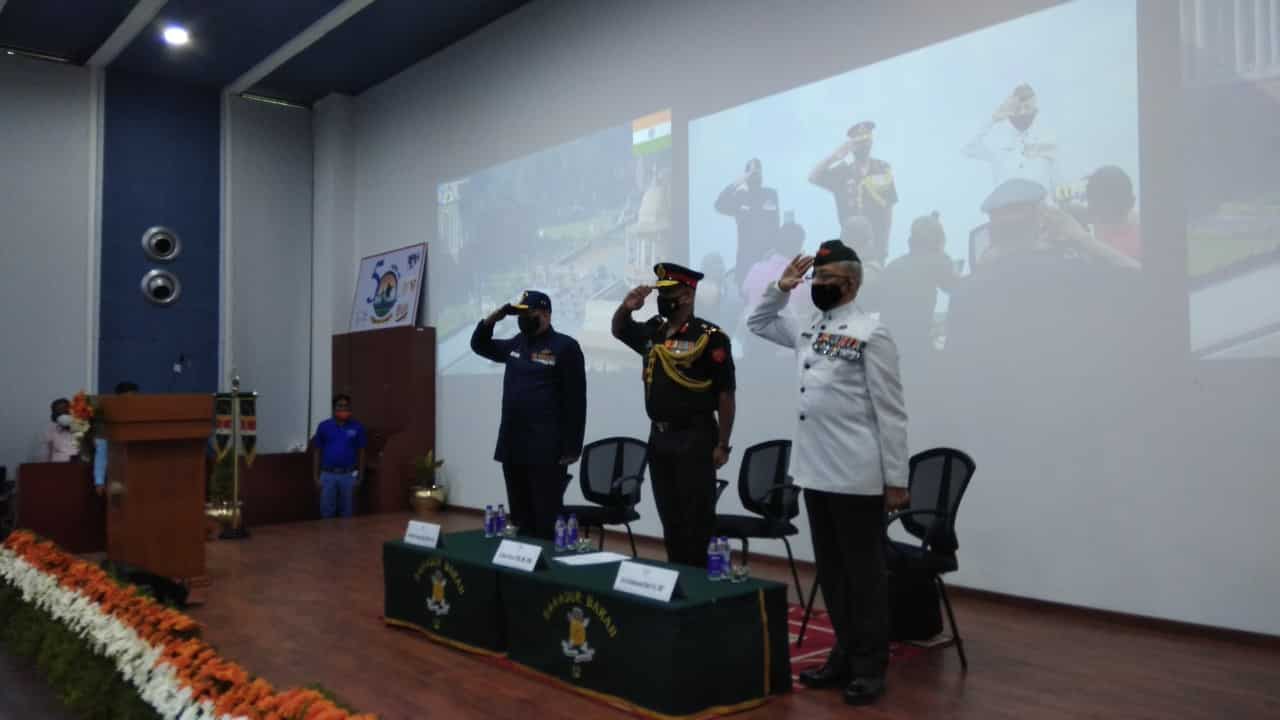 Both the officers who were commissioned into the forces in 1958 relived their life and times in the run-up to the war. Notably, three generations of Col Krishnaswami’s family are in the forces and in the case of Rear Admiral Ramsagar, he had many of his kin serving in the forces prior to his own joining. As is the case in the forces, the families did not know when or whether the men went to war or where they were posted.

Col Krishnaswami recalls that he had missed the opportunity to fight in the 1962 and 1965 wars, but had accumulated enough experience over the years for the operation he conducted in 1971.

Posted in India’s north-east, he volunteered to lead his troops into the then East Pakistan and conducted an ambush. But this was no ordinary one - it involved trekking undetected for dozens of kilometres through rice fields, slush forests and river crossings in neck-deep water, all while protecting their ammo and weapons from getting soaked. Their target was an ammo-loaded vehicle exiting an ordnance factory in enemy territory.

The Colonel and his 80 men were tasked with delaying the vehicle movement, encircling and neutralising them. By laying traps to block the convoys (some of which were led by tanks), the Indian infantry men aided by artillery support killed over 117 Pakistani troops and injured many others.

Two Indian army men were killed in action, besides the two who were injured in this operation. It is significant that the Indian troops had taken the enemy by surprise, despite having infiltrated deep behind enemy lines.

When a Pakistani Army officer surrendered before Col Krishnaswami, he reportedly said that they did not have the equipment to bury their fallen troops. Krishnaswami retorted that it was not about the equipment, but about the Pakistanis’ lack of willingness to dig a burial pit.

He then ordered his men to dig the graves for Pakistani troops, as the Pakistani Major stood there in shock and awe. On seeing the graciousness and professionalism displayed by the Indian troops in digging graves for their fallen enemies, the Pakistani Major reportedly exclaimed in praise “If we had soldiers and officers like these, we would never have lost a war”.

He lauded the immense support provided by the Air Force in creating an atmosphere of air Superiority for 13 days, where India’s Air Force was used in a manner that rendered the enemy Air Force ineffectual.

The fledgling Indian Air Force flew 6,000 sorties in 13 days as part of combat and non-combat missions. All of this must be seen in the context of the 1971 scenario where there were multiple logistical, technological and hardware related challenges(that are not as prevalent in the present day scenario).

A senior pilot of the Alize Squadron, that operated from aircraft carrier INS Vikrant, Rear Admiral Ramsagar recalls how Pakistan started the war when the Vikrant was non-operational in the dry dock for service. He touched upon the Navy’s then leadership that took tough and astute decisions such as moving the Vikrant from Bombay in India’s West(within Pak's reach) to Vishakapatnam in the east(within the reach of only a single Pak submarine).

While the partially-serviced carrier had crossed over to the east coast, the Naval aviator recalled having undertaken non-catapult assisted take-offs and also making landings during such tests.

When the carrier was stationed off Vishakapatnam, a Pakistani submarine PNS Ghazi had made it into the harbour and started laying mines. However, while the submarine did so, it is said that it exploded due to a detonation of one of the mines it had laid, following which an INS Rajput also pounded it with explosives and divers recovered the Ghazi nameplate.

When the aircraft carrier was moved closer to east Pakistan, day time bombings runs were done by the carrier-based Hawk planes, whereas night missions were by the Alize aircraft.

The Navy planes carried out extensive attacks on Dhaka, Chittagong and Cox’s Bazaar during the night and day, thanks to the Indian Air Force which had quelled all resistance from the air and ground.

It was during the fourth day of the war that Rear Admiral Ramsagar flew a reconnaissance sortie into western Bangladesh and noticed large vessels that were meant to ferry Pakistani troops back.

After raining his six rockets onto the six vessels(which were too large to be significantly damaged), he flew back to the carrier and reported his sighting, following which they went on another bombing run, which led to the ships showing white flags in an act of surrender.

However, on the tenth day of the war, while flying over the western region of East Pakistan, he made a daring low-flying attack on Pakistani vessels that were being towed.

While his bombs missed the narrow vessels, only a depth charge fell on one vessel. Fearing the explosion of the charge, thousands of Pakistani troops jumped into the water fearing for their lives.

However, the Alize was hit by enemy gunboat fire at close-range of which eight rounds pierced and exited the aircraft. The hits caused a hydraulics failure, wing and engine fire onboard on his plane and some shots even missed his feet by a whisker.

With only his battery-powered communications set and a compass, he and his crew flew 90miles on a damaged aircraft to make a successful night landing on the INS Vikrant.

Instead of performing a net-landing (as advised), he performed a normal landing, in order to save his aircraft from total damage.

Summing up the gallantry displayed by the forces and the events of the war, Lt Gen Arun said that it displayed the ability to take risks, mitigate risks and nullify their effects.

He also touched upon the importance of camaraderie, honouring the fallen, while lauding the forces’ perseverance, courage and tenacity. He referred to the Indian military leaders’ foresight, planning and the ability to think through information overload and high-pressure situations and highlighted the importance of such skills among the corporate leaders and management.

Among those honoured at the event were Veer Naris(wives of fallen soldiers).