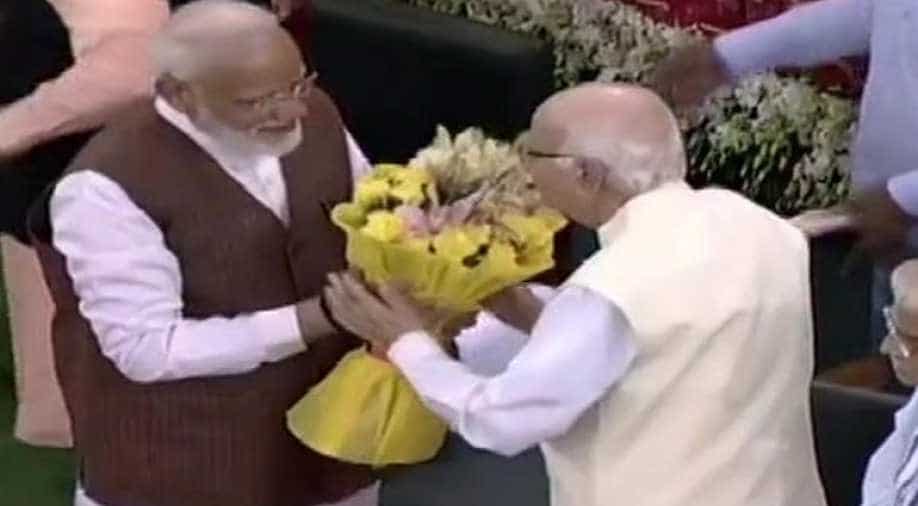 A host of political leaders from the NDA reached New Delhi to attend the BJP-led coalition meeting.

The parliamentary board of the BJP-led National Democratic Alliance (NDA) unanimously elected Prime Minister Narendra Modi as leader of NDA coalition at a meeting in Parliament's Central Hall in New Delhi on Saturday.

Amit shah proposed Narendra Modi's name as the leader of BJP Parliamentary Party while Rajnath singh and Nitin Gadkari seconded the proposal which was endorsed by all BJP MPs.

"Modi is elected the leader of the parliamentary party of 353 MPs unanimously," BJP president Amit Shah announced after the election as Modi acknowledged the support and cheers from MPs.

Modi's election was a mere formality as the NDA had already declared him the alliance's prime ministerial candidate.

Modi sought the blessings of senior BJP leaders LK Advani, Murli Manohar Joshi immediately after he was elected as the leader of BJP & NDA at the NDA meeting.

The NDA leaders will meet President Ram Nath Kovind at 7pm. After the meeting, Modi will meet the President at 8pm and stake claim to form the government.

The 16th Lok Sabha was dissolved on Saturday following the general elections and the new House has been constituted. The President signed the order accepting the advice of the Cabinet which met on Friday and made a recommendation to this effect.

The NDA returned to power with a massive majority in the Lok Sabha elections with the BJP alone bagging 303 of total 542 seats contested, 21 more than it had got in the 2014 elections. Elections were held in 542 of the 543 seats. The election in Vellore Lok Sabha seat was cancelled by the Election Commission citing abuse of money power.

Modi's swearing-in ceremony is expected to take place on May 30. India has started sending out invites to neighbouring countries and ASEAN nations for the ceremony.

WION has learnt that Sri Lankan President's office has confirmed to media that President Maithripala Sirisena will be attending the oath-taking ceremony. This is in line with the Modi government's "Neighbourhood First" policy and "Act East" policy as well as its growing focus on the BIMSTEC grouping.