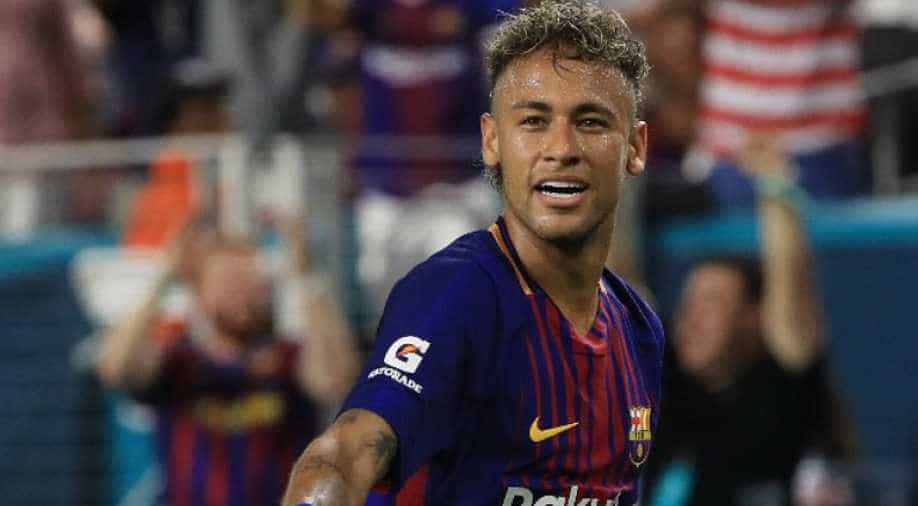 Neymar is expected to finalise his world record 222 million euro ($260 million) move from Barcelona to Paris Saint-Germain, which will earn him around 30 million euros ($35.5 million) a year. Photograph:( AFP )

Neymar is expected to arrive in Paris on Thursday to finalise his world record 222 million euro ($260 million) move from Barcelona to Paris Saint-Germain, which will earn him around 30 million euros ($35.5 million) a year.

The summer's longest-running transfer saga, which this week saw the 25-year-old tracked from the United States to China to the Middle East, back to Barcelona to say goodbye before a swift detour to Porto where he was thought to have undergone a medical, will end in the French capital with new teammates already queuing up to welcome him.

Argentine midfielder Javier Pastore is already set to surrender his symbolic number 10 shirt to his fellow South American at the Parc des Princes, where Neymar could be unveiled to fans on Saturday evening when PSG open their new Ligue 1 season against Amiens.

"I want him to feel comfortable and happy from day one," Pastore told Cadena SER radio.

On Wednesday, Barcelona admitted defeat in convincing Neymar to stay at the Camp Nou where he has played since 2013.

The player travelled to Porto by private jet from Barcelona surrounded by his entourage, including his father and agent Neymar Sr, after saying goodbye to his Barca teammates.

Among that party was Wagner Ribeiro, an advisor to the player, who claimed PSG would pay his 222 million euro ($260 million) buyout clause in the "coming hours".

Media reports suggested that Neymar had gone to Porto, where PSG sporting director Antero Henrique had worked until recently, to undergo a pre-transfer medical.

Neymar has been tempted to Paris by an astronomical offer that would reportedly see his wages tripled to 30 million euros a year after tax.

However, on the field he also faces the challenge of stepping out of the shadow of five-time World Player of the Year Lionel Messi to try and prove himself as the world's best.

"It was a huge pleasure having shared all those years with you, my friend @neymarjr," Messi posted on Instagram alongside a montage displaying some of the pair's finest moments together.

Messi 'loves' Neymar
"I wish you lots of luck in this new stage in your life. See you soon tkm," he added. "Tkm" stands for "te quiero mucho" (I love you loads).

"Thanks brother. I will miss you man," Neymar replied.

Winning the Champions League for a first time is the dream driving PSG's owners Oryx Qatar Sports Investments (QSI) to fund a deal that could herald the start of a new era at the elite level of European football.

Since QSI's takeover in 2011, PSG have failed to make it beyond the quarter-final stage - most notably blowing a 4-0 first-leg lead to lose 6-1 to a Neymar-inspired Barcelona in the last 16 of last season's competition in March.

Prising Neymar from the grip of Barca would truly announce PSG's presence as a contender for the likes of Barca, Real Madrid and Bayern Munich to fear.

Neymar has formed one of the deadliest strike partnerships in football history with Messi and Luis Suarez over the past three seasons.

Together they have won two La Liga titles, a Champions League and three Spanish Cups, whilst Neymar has scored 105 goals and provided 80 assists in just 186 games.

However, his four-year spell in Spain has also been overshadowed by the murky transfer deal which brought him to Barcelona from Santos in 2013.

He and his parents as well as Barca president Josep Maria Bartomeu face charges of fraud and corruption in an ongoing case brought by DIS, a Brazilian investment company.

DIS owned 40 percent of the players' rights at the time of the deal and believe they were deliberately cheated out of their real share due to the complex structure of the transfer.