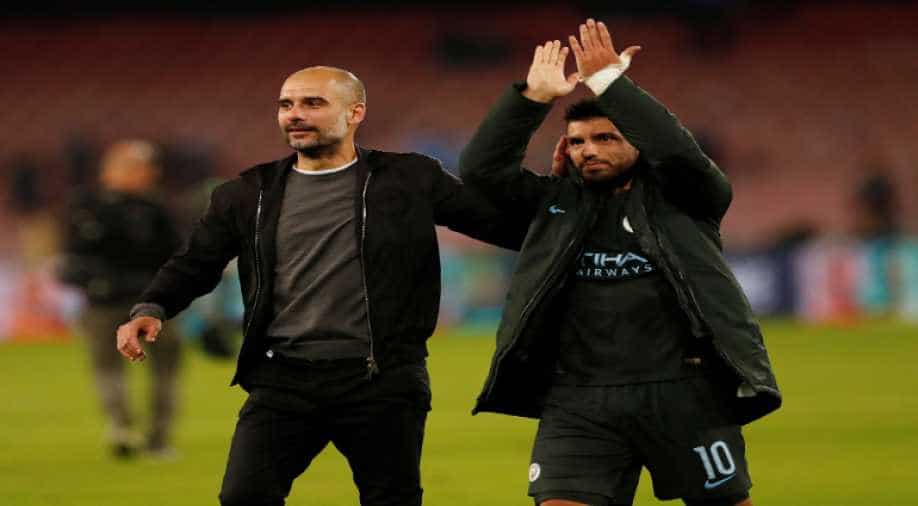 Sergio Aguero became Manchester City's all-time record scorer and was described as "a legend" by coach Pep Guardiola whose side booked their place in the Champions League last 16 with a 4-2 win at Napoli.

The 29-year-old Argentine beat the old mark of 177 set by Eric Brook in the 1930s when he hit City's third goal in Naples, then promised to give his shirt to his eight-year-old son Benjamin -- the grandson of Argentina and Napoli legend Diego Maradona.

"This shirt is for my son, he texted me to say: "As soon as you score, bring me the shirt'," said Aguero.

"I am bringing the shirt back to my son. My family called from Argentina, they were watching me."

Aguero's son was born from his marriage to Giannina Maradona, the daughter of Diego.

And Aguero achieved his new landmark at the San Paolo Stadium where Maradona made himself a Neapolitan icon between 1984 and 1991, winning two Serie A titles and the UEFA Cup.

"What he (Aguero) has achieved has made him a legend, he's gone down in history, so I would tell him to enjoy," said Guardiola.

Aguero paid tribute to his team-mates for his record 178 goals.

"I'm very happy for this moment and happy because the team help support me and the fans.

"I'll enjoy this moment because it only happens once.

"Napoli are a good team and away always in the Champions League is difficult."

The Premier League leaders had needed just a point to seal their berth in the knockout rounds for the fifth consecutive year, with two games to go.

But City's fourth victory out of four in Group F confirmed their progress with 12 points.

Napoli are third, six points behind Ukrainian side Shakhtar Donetsk who beat Dutch outfit Feyenoord 3-1, and are close to elimination from the elite European competition.

The new benchmark is just another for the man from Buenos Aires who joined City from Atletico Madrid in 2011 for £38 million, scoring two goals and assisting one on his debut against Swansea.

He currently has the best goals-to-minutes ratio in Premier League history -- scoring 107 in 154 Premier League matches at a rate of a goal every 106 minutes.