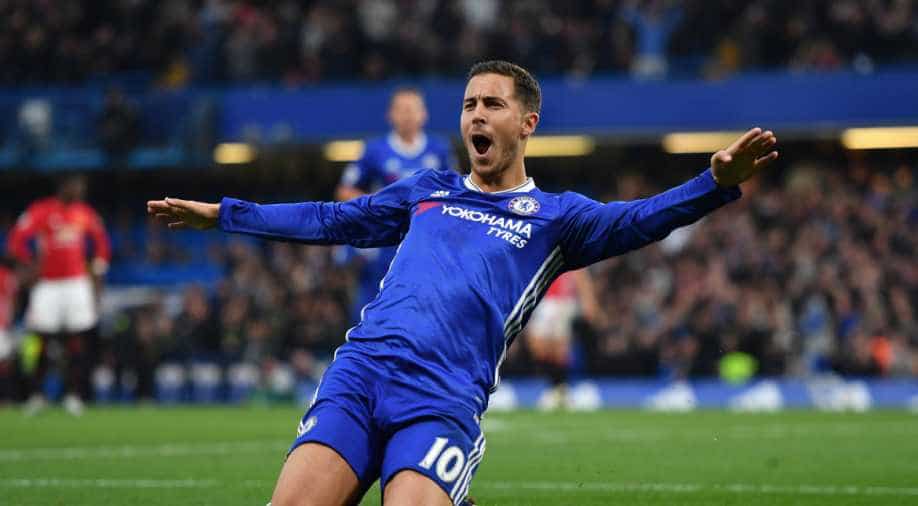 'When you win in this way it's fantastic because we played good football with good intensity,' Chelsea coach Antonio Conte told BT Sport. Photograph:( Getty )

Eden Hazard scored twice as Chelsea exploited a slip-up by Manchester City to claim top spot in the Premier League by stylishly crushing Everton 5-0 on Saturday.

Marten de Roon's stoppage-time equaliser earned Middlesbrough a 1-1 draw at City and Antonio Conte's Chelsea took advantage to move a point clear of Pep Guardiola's side at the summit.

"When you win in this way it's fantastic because we played good football with good intensity," Conte told BT Sport.

"All the players played in the right way with and without the ball. We created many chances to score and also it's the fifth clean sheet in a row, which is fantastic.

"It is fantastic to be top of the league."

Arsenal and Liverpool could also surpass City before the weekend is out, the former tackling Tottenham Hotspur in Sunday's North London derby and the latter entertaining Watford.

Elsewhere, bottom club Sunderland ended their wait for a first win of the season at the 11th attempt by coming from behind to win 2-1 at Bournemouth despite having Steven Pienaar sent off.

At Stamford Bridge, Chelsea produced one of their most scintillating performances in recent memory as the 2014-15 champions made it five straight wins without conceding a goal.

Hazard opened the scoring in the 19th minute, drifting in from the left to drill a shot into the bottom-right corner, and a minute later Pedro Rodriguez teed up Marcos Alonso for the hosts' second.

Diego Costa made it 3-0 three minutes before half-time, slamming home at the back post after Nemanja Matic flicked on Hazard's corner to bring up his ninth goal of the campaign.

Chelsea's fourth goal was a jewel, Pedro returning Hazard's pass with a sweet back-heel and the Belgian dancing into the box from the right before lashing home with his left foot.

Pedro volleyed in the fifth, in the 65th minute, after Everton goalkeeper Maarten Stekelenburg parried a shot from Hazard.

City went into their game on the back of a stirring 3-1 Champions League win over Barcelona and Boro's former Barca goalkeeper Victor Valdes looked determined to restore Catalan pride at the Etihad Stadium.

He saved brilliantly from Sergio Aguero and David Silva, only for Aguero to put the hosts ahead in the 43rd minute by converting Kevin De Bruyne's sumptuous cross for his 150th goal in 223 City appearances.

Boro showed more attacking intent in the second half, former City striker Alvaro Negredo almost catching out Claudio Bravo with an audacious lob from his own half before Bravo saved smartly from Adam Forshaw.

"We did absolutely everything to win the game. It is a pity," said Guardiola, whose side have drawn their last three home league games 1-1 following previous stalemates against Everton and Southampton.

"It is a miss because we have dropped six points in the last three home games, but we are still there. We have to move forward."

Sunderland remain bottom, below Swansea City on goal difference, but manager David Moyes belatedly has a victory to his name following a hard-fought success at Bournemouth's Vitality Stadium.

After Adam Smith had teed up Dan Gosling to bundle in an 11th-minute opener for Bournemouth, Victor Anichebe equalised with his first Sunderland goal.

Pienaar was sent off just before the hour after receiving a second yellow card for a lunge on Junior Stanislas, but Jermain Defoe netted a 74th-minute winner from the spot after Smith felled Anichebe.

"It is a big relief," Moyes told Sky Sports. "We owed the supporters the victory. They have kept with us.

There was late drama at Turf Moor as Burnley withstood a Crystal Palace fightback to prevail 3-2 courtesy of Ashley Barnes's 94th-minute strike.

Sam Vokes and Johann Berg Gundmundsson put Burnley 2-0 up, only for Palace to hit back through second-half goals by substitute Connor Wickham and Christian Benteke.

But in the fourth minute of stoppage time, Gudmundsson crossed for Barnes to fire home and condemn Palace -- who later hit the post through Andros Townsend -- to a fourth straight defeat.

Stoke City drew 1-1 at West Ham United, Bojan Krkic exploiting an error by home goalkeeper Adrian to equalise in the 75th minute after a Glenn Whelan own goal had put the hosts ahead.