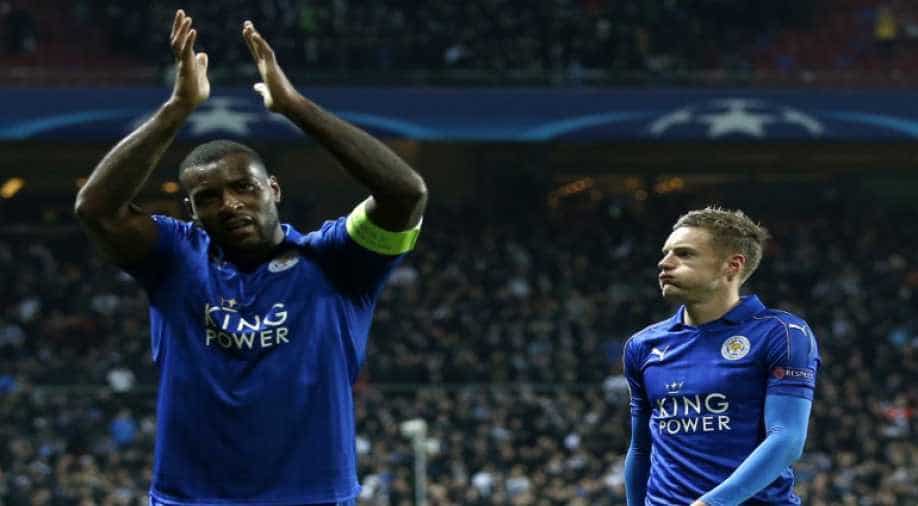 The Danes started well, playing at a high tempo and forcing a succession of free kicks and corners in the first half to keep Leicester on the backfoot. In photo: Leicester City's Wes Morgan applauds their fans with Jamie Vardy after the match. Photograph:(AFP)
Follow Us

Leicester City missed the chance to book an early spot in the Champions League's knockout stages as they survived some nervy moments to secure a goalless draw with FC Copenhagen in Group G on Wednesday.

Having won their previous three group games, the Premier League champions stood on the brink of reaching the last 16, but Copenhagen denied them the victory they needed, while improving their own qualification hopes.

The Danish side's only previous loss in 27 competitive games was a 1-0 reverse to Leicester in their Champions League clash two weeks ago, and on several occasions they threatened to take all three points on home turf.

Their best chance came in the 70th minute when Leicester defender Christian Fuchs cleared Benjamin Verbic's effort off the line as the home side pressed forward while the visitors' keeper Kasper Schmeichel made a smart save from Andreas Cornelius in the dying minutes.

Riyad Mahrez was once again the most influential creative presence in Claudio Ranieri's side, but the Foxes had to settle for a draw on a chilly night in Copenhagen.

With the top two qualifying for the knockouts and two rounds of group matches remaining, Leicester top the standings with 10 points from four games, while Copenhagen are third on five, two behind Porto, who beat Club Bruges 1-0.

"If you win you are more satisfied, but you have to respect the opponent," said Ranieri, before adding that his side were still in a very good position at the top of the group.

"After 180 minutes the only thing I am left with is that we didn't put it in the net. Leicester created two or three chances over 180 minutes," Solbakken told reporters.

The Danes started well, playing at a high tempo and forcing a succession of free kicks and corners in the first half to keep Leicester on the back foot, but the final delivery into the box was often poor.

Leicester were not much better in attack and as both defences flung themselves into the path of the ball to block shots, neither goalkeeper had much to deal with.

Mahrez and Danny Drinkwater combined to create an excellent chance for Leicester in the 58th minute but there was nobody on hand to steer the ball home as the latter rifled it across the face of goal.

The Danish champions almost stole the win late on as striker Cornelius rose highest to send a downward header into the bottom left corner.

Yet Schmeichel, playing his first competitive club game in the city of his birth, reacted quickly, pushing the ball away smartly to maintain Leicester's unbeaten record and secure a fourth straight clean sheet in the competition.