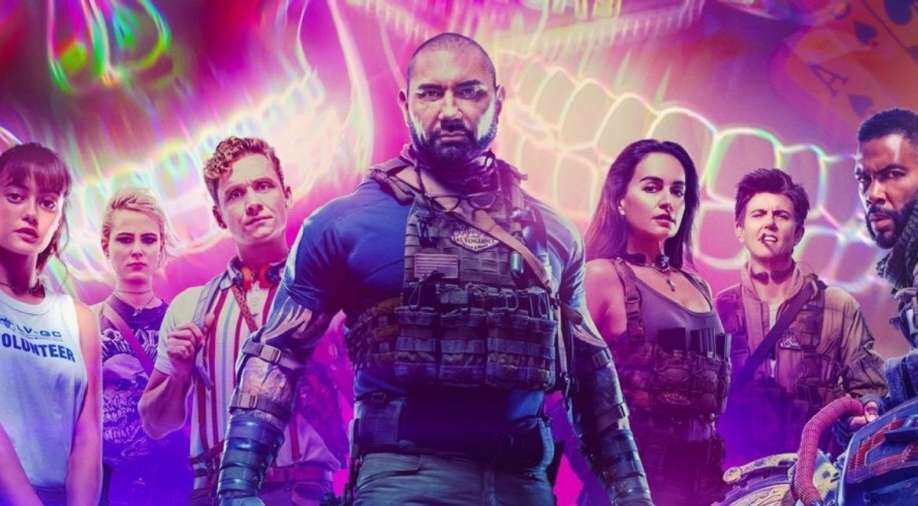 Snyder, 55, dreamt up the idea for a zombie heist movie years earlier but rewrote it to centre on the relationship between tough-as-nails father Scott (Dave Bautista) and his estranged daughter Kate (Ella Purnell.)

After a decade making some of Hollywood's biggest superhero movies, director Zack Snyder has returned to the monsters who made his name -- zombies, who this time have taken over Las Vegas.

In "Army of the Dead," which hits limited theatres Friday and Netflix May 21, the desert gambling metropolis has been sealed off after being overrun by blood-splattered, flesh-chomping hordes of the undead.

A gun-toting group of mercenaries attempts to infiltrate the city to retrieve millions of dollars from a vault beneath the Strip, with just hours to spare before a nuclear bomb is dropped on Sin City's grisly residents.

For a director who made his name with a 2004 remake of George A. Romero's "Dawn of the Dead" -- which satirized rabid consumerism by setting zombies loose in a shopping mall --, it was an easy pitch.

"It's a zombie movie about a gang of zombie killers who go into zombie-infested Vegas to get the money out," Snyder recalled telling the bosses at Netflix.

"So it wasn't like they were like, 'Oh, geez, let's not make that movie. No one wants to see that!'"

But for all its brash, high-octane fun, the movie -- a homage to genre films like "Escape from New York" and "Aliens", and heist movies such as "Ocean's Eleven" -- carries genuine emotional heft for Snyder.

It is his first brand-new film since having to walk away from directing the star-studded DC superhero epic "Justice League" in 2017 following the suicide of his daughter.

Snyder, 55, dreamt up the idea for a "zombie heist" movie years earlier but rewrote it to centre on the relationship between tough-as-nails father Scott (Dave Bautista) and his estranged daughter Kate (Ella Purnell.)

"As a human being I have evolved from when I made 'Dawn,'" he told a virtual press conference.

"And just having the relationship I have with my children and being a dad... that part of the movie really became a lot more important to me than maybe it was 15 years ago."

He added: "Dave's character is trying to reconnect with his daughter... yes it's a zombie heist movie, but really in the end it's a character movie in a lot of ways."

Of course, other profound changes have hit the world since Snyder began filming "Army of the Dead" in 2019, which lend the film an eerie prescience.

The Covid-19 pandemic brought the 24-hour bright lights and casino floors of Las Vegas -- and Hollywood itself -- to brief standstills, while former president Donald Trump was booted out of office by US voters.

In the movie, Las Vegas refugees are shown quarantined in cages and subjected to random temperature gun checks by brutal guards, while partisan news channels ask, 'Quarantine: Truth or Scare?'

The decision to drop a nuclear bomb on Las Vegas on July 4 comes from an unnamed US president who thinks the idea of fireworks on Independence Day would be "really cool" and "patriotic."

"There's been a lot of crazy things that have elevated the movie in some way or other," said Snyder in the film's press notes.

"We wanted to focus on how a zombie plague would affect the disenfranchised and how the government might use something like a zombie plague to take away certain freedoms," he added.

"The interpretations are completely different now from when we first started. But the catch-all for zombie movies is still the same: in the end, humans are worse than zombies."