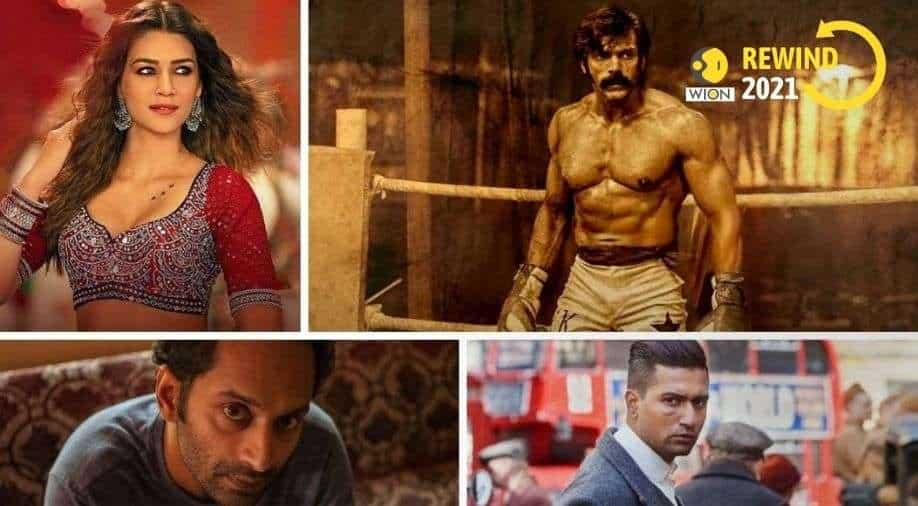 Subhash K Jha picks the actors who shone on the digital platform in the year 2021.

The year threw forward some surprises as far as the actors were concerned. As Sushmita Sen told me, she unlearned all the overt acting skills to just “be” in front of the camera for 'Aarya'. Are our actors finally learning to just be themselves? Looks like it. Here are the actors who shone on the digital platform.

1. Kartik Aaryan in 'Dhamaka': Kartik Aaryan’s powerful performance holds the film together. His journey from a self-serving scumbag to a conscientious newshound is convincingly achieved by the young actor. This is his best performance to date and one that puts him ahead of all competition. I see Kartik winning all the best-actor awards this year. So far the digital platform has not been very kind to the Bollywood A-listers. Akshay Kumar floundered with' Laxmii', Varun and papa David Dhawan delivered the worst film of their career in 'Coolie No 1'. Salman Khan’s 'Radhe' was arguably the worst film of the superstar’s career. As for Anil Kapoor’s 'AK Versus AK', the less said the better. What is the “IT” factor that goes missing when Bollywood A-listers translocate their films from the big to the small screen? That lacuna in the genre will be filled by 'Dhamaka.'Director Ram Madhavani already had us gripped with the series 'Aarya' and that superb hijack drama 'Neerja'. He knows how to keep us on tenterhooks. While Kartik Aaryan will be the first Bollywood A-lister to break the barrier between Bollywood and the OTT, there are several A-listers like Shah Rukh Khan, Aamir Khan, Hrithik Roshan and Ranbir Kapoor who have so far stayed away from the OTT platform. It is time for Bollywood’s superstars to get down from their high horses and adapt to the new home medium of entertainment. Don't give us arrogant self-centred I-me-myself films like 'Sadak 2' and 'Kali Peeli' on the OTT.

2. Jayasurya in 'Sunny': Jayasurya’s spectacular performance holds this one-man show together. He is so inured in the character’s dark desperate suicidal world(at one point, Sunny puts a piece of broken glass to his wrist, at another point he is about to jump off from the balcony of his fourth-floor hotel suite) that we become unconditionally invested in his desolation for a little more than 90 minutes. Not that Sunny is likeable or even remotely heroic. But his anguish is a throbbing entity, impossible to ignore. I’ve seen many actors do a one-man show: Sunil Dutt in 'Yaadein', Rajkummar Rao in 'Trapped' Tom Hanks in 'Castaway'. None of these actors has been able to capture the essence of isolation as effectively as Jayasurya. He takes us into Sunny’s wretched life—a broken marriage, a broken extra-marital affair, a lost job, debts owed to nasty people, a dead child—not in a ritualistic relay race of imposed drama created to build a sense of sympathy around the quarantined hero. As for Jayasurya, is he a better actor than his Malayali peer Fahadh Faasil? When Sunny finally breaks down at the end(out of relief, not despair) I was sobbing with him. This is not a performance. This is an embodiment of life’s essential truth where the adage ‘This Too Shall Pass’ acquires an entirely novel relevance.

3. Pawan Malhotra In 'Tabbar': Set in the curiously vivacious bustle of Jalandhar it has the extraordinary Pawan Malhotra as Omkar a petty entrepreneur and patriarch with a wife and two sons. One night, their lives go wrong and thus begins a distressing horrific downward spiral that can only go one way. Malhotra’s character makes it to the grade of a gender-reversed Mother India. Pawan Malhotra and Supriya Pathak bring nuances to their stereotypical roles(strong obdurate father, frail devoted mother) that are hard to pinpoint.

4. Kriti Sanon in 'Mimi': Kriti Sanon, in a role written to make her shine, plays an ambitious Rajasthani dancer who wants to be a Bollywood star, and has Ranveer Singh’s poster in her room. She also has Deepika and Kareena’s pictures on the wall just to remind herself that once she gets to Bollywood those divas are done with. The film has some interesting ideas on parenthood and the woman’s right to her womb. But the treatment gets progressively guillotined by excessive melodrama. However, Kriti’s feisty performance holds interest till the end.

5. Mita Vashisht In 'Your Honor 2': That’s what two brilliant actors can do to you. Every time Jimmy Sheirgill and Mita Vashisht are on screen together, you want to see just where their conversation is going. The words they speak seductively encircle their cat-and-mouse game in this energetic engrossing and altogether gripping tale of empowerment privilege and their misuse. Vashisht’s sly cop act furnishes a vinegary flavour to her conversations with the Judge in the dock. Vashisht plays the cop as a mixture of attentive and disdainful. I just couldn’t take my eyes off her stolen steely scornful glances at the guilty-as-sin Judge. The brilliant Mita Vashisht enters the plot in Episode 3 in Season 2. Once she does, the plot gathers some momentum.

6. Vijay Sethupathi in 'Nava Rasa'(Netflix): They say 'save the last for the best. But in this eclectic uneven omnibus of nine stories based on the nine basic human emotions, the best is the first story, Edhir, based on the emotion of pity (Karuna). It features two powerhouse performances by Vijay Sethupathi and Revathy as the murderer and his victim’s wife respectively. Their confrontation is so beautifully mapped that the entire film seems to have been plotted by director Bejoy Nambiar just to bring these two fabulous actors together. But no. There is more here. Edhir addresses itself to the question of the conscience and the power/ambiguity of forgiveness with such stupendous serenity -- it is a joy to behold the art of Bejoy. Sethupathi is a force of nature. With one twitch of his eyebrow, he can convey an ocean of conflicting emotions.

7. Fahadh Fasil in 'Jijo': In film after film, Fahadh proves himself a fearless peerless seamless actor who merges into his characters like water in a stream. And better still flows down that stream where the human condition merges with the very bedrock of existence. And look at where Fahadh has arrived in Joji! Shakespeare’s Macbeth gets the treatment which I am sure would make Shakespeare himself envious Joji is of course played by the great Fahad Faasil who brings to the character a kind of patriarchal bitterness that manifests itself in a not-expected burst of devastating violence. This is director Dileesh Pothan’s third directorial with Fahadh(after Maheshinte Prathikaaram and Thondimuthalum Driksakshiyum) and by far the most reflective, moody, sinister, subtle and sublime. Though Macbeth is an inherently violent tale of patricide and Oedipal guilt, Pothan’s film does away with the vileness of the protagonist’s deeds by introducing a kind of dithering juvenilia into Jijo’s character. His chosen weapon of violence is an airgun and his selected hideaway is a half-dug well. Fahadh’s Jijo is an unlikely villain and hence all the more devastating. He is also an unlikely Shakespearean hero who has in all probability never heard of Shakespeare.

8. Huma Qureshi In 'Maharani': Huma Qureshi’s transformation from Leila in Deepa Mehta’s 'Leila' searching for her lost daughter, to Rani the politician’s wife who searches for her own identity, is admirable. Here Huma creates a woman who is at once street-wise and parliament-foolish but possesses the moral wherewithal to tell right from wrong. The way she stands up against her husband in the dismissal of Prem Kumar, the Minister in-charge of the fodder resources, would get taalis in the movie theatre. If only wishes were horses, then Rabri Devi would be Margaret Thatcher. ‘Fodder’ record, the real Lalu Yadav was convicted in the 950 crore scam. In this thrill-stamped cleaned-out sweeping drama, all the guilt is shifted to the Minister while Rani Bharati runs an expose that transforms her into a neo-Joan Of Arc, a woman who cares deeply for the truth. Alas, we can’t say the same for the makers of this series who have spun a fabulously fake drama, transforming a rubberstamp wife to a self-willed righteous crusader-political. The dishonesty doesn’t make Maharani any less interesting. Ms Qureshi makes sure she elevates her character into some kind of a feminist firebrand without rendering Rani unbelievably noble. The woman in Rani Bharati surfaces in her scenes with her convalescing husband.

9. Siddharth Malhotra In 'Shershaah': Sidharth Malhotra plays real-life soldier Vikram Batra with sincerity and honesty that shine through in every frame. In every frame, he is Rajesh Khanna in Anand and Aradhana. You know he is going to be missed sorely once he’s gone. Malhotra plays Batra as unforgettable. Boyish, helpful, sincere and endearing. There is not a duplicitous bone in this soldier and lover-boy. The film allows the protagonist to fly freely.

10. Ahana Kumra in 'Call My Agent': Aahana Kumra, the fearless feisty firefighter of an actress doesn’t mind looking ridiculous if the need arises. Aahana plays Amaal, a kamaal ki lesbian with temper tantrums problems who more than meets her match in Jasleen(Anuschka Sawhney), a tax assessor with has the hots for Amaal. Their romance plays out like a rippling riff in a buxom musical refrain that is warm intimate relatable and sometimes sad.

11. Taapsee Pannu in 'Haseen Dillruba': Taapsee delivers yet another titillating tongue—and-taang-in-cheek performance, rendering Rani a slut hard to slot. It’s interesting to see how an avant-garde writer like Kanika Dhillon is pushing the Hindi Film Heroine over the edge. She can now crave for things like non-vegetarian food and satisfactory sex without being slut-shamed. It’s okay to be a slut now. Rani Tripathi, nee Kashyap, is the kind of hormonal heroine who gives the smalltown slut a bad name.

12. Vicky Kaushal in 'Sardar Udham': Kaushal can tell his children he got married to their mother during the same year that he gave his career’s best performance. Vicky Kaushal’s Udham Singh is a performance laced with grace, tinged with bitterness and defined by a dormant rage. When Kaushal says something as innocently pacifying as “Mere bahot saare British friends hain” he sounds as fringe-friendly as those fake liberals who say, “I’ve nothing against the gay community. In fact, some of my best friends are gay.”

13. Arya in 'Sarpatta Parambarai':  In the author-backed role of Kabilan, Arya is a revelation. I’ve seen his earlier works. Nothing he has done in the past can ever equal the power and glory of the self-destructive streak and the redemptive strength that pull his character out of his self-made abyss into a tentative light at the end when in the final fight in the ring, he defeats his main adversary. Wife and mother who hate his boxing ambitions are there to cheer him on.The power of cinema is to sway and derail negative emotions. One of the many unadulterated pleasures of watching Sarpatta Parambarai is to see Kabilan’s absolutely endearing relationship with his wife. If the husband-wife relationship rings true, the guru-shishya tradition is here taken into a zone of insulated adoration where the protégé hero-worships his guru blindly. Arya manifests all the roles and emotions of his character with majestic authenticity and an empowering rawness. He is childlike in his stubbornness and a true hero in his selfless quest for victory in the boxing ring.