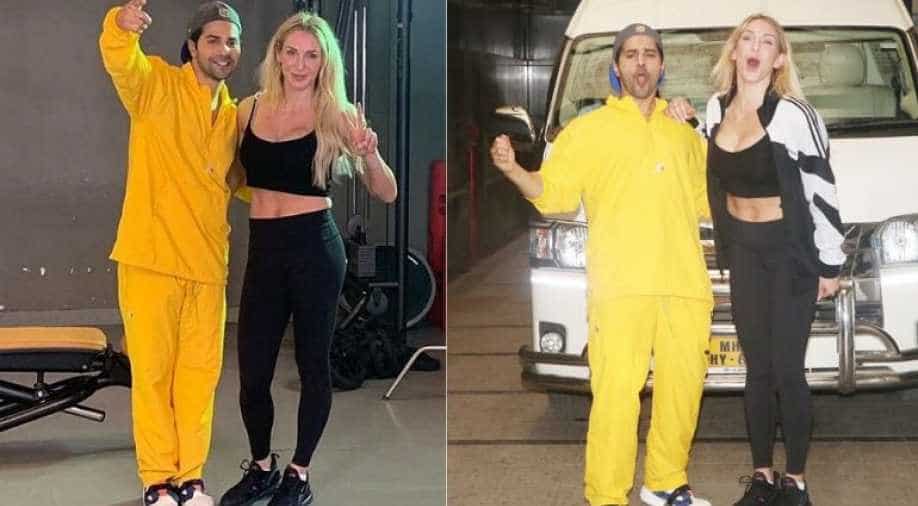 Varun Dhawan is currently shooting for 'Coolie No. 1' where he will be seen opposite Sara Ali Khan.

While his acting and comic timings are known to all, actor Varun Dhawan turned out to be a perfect teacher when he gave dance lessons to professional wrestler Charlotte Flair.

In what appears to be a gym, Flair is seen trying and enacting some groovy dance moves made by the actor, in a video she shared on Twitter. While Varun smoothly repeats the move, the wrestler breaks out in a laugh when she fails to catch up with him.

"Not quite salsa lessons instead of learning some Bollywood dance moves .. thank you @Varun_dvn getting me Bollywood ready!" she tweeted. While retweeting the same, the 'Judwa 2' actor wrote, "Such a pleasure meeting u Charlotte. You truly are a queen. Charlotte already dancing on a street dancer song".

Not quite salsa lessons instead learning some Bollywood dance moves .. thank you @Varun_dvn getting me Bollywood ready! 👸🏼 #Mumbai #India 🇮🇳 pic.twitter.com/XdSXK9XKaH

Flair has been in India for a few days. She even celebrated Children's Day with Special Olympics Bharat. Meanwhile, Varun, on the work front, is currently shooting for 'Coolie No 1' where he will be seen opposite Sara Ali Khan.

Woooo with the queen @charlottewwe. Wish we spent more time. She’s a champ #wwe. Check out my YouTube channel for the exclusive chat

It is the remake of the Govinda and Karisma Kapoor starrer film of the same name with both being directed by Varun's father and filmmaker David Dhawan.

The upcoming feature will be produced by Vashu Bhagnani, who also bankrolled the 1995 classic. He will also be seen flaunting his dance skills in Remo D'Souza's upcoming directorial 'Street Dancer 3D'. The film also starring Shraddha Kapoor will hit screens next year on January 24.