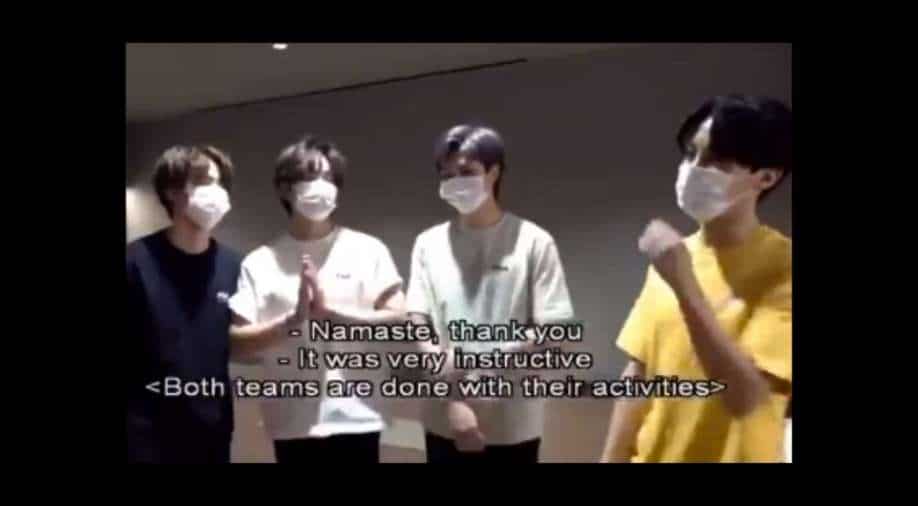 Huddled together for a yoga session, BTS members was seen thanking the yoga instructor for the class as singer V bowed saying “Namaste, thank you”.

K pop band BTS stunned Indian fans as they shared a video performing yoga but that’s not it. As they performed yoga and addressed fans, singer V also known as Kim Taehyung lost his balance and did something that no one could have anticipated.

Huddled together for a yoga session, BTS members was seen thanking the yoga instructor for the class as singer V bowed saying “Namaste, thank you”.

Soon after the video came out, Indian fans couldn’t get enough of it and reshared the video several thousand times. A fan posted, "#Namaste #V #Taehyung He said namaste it means he really think about us #IndianArmy.”

Another fan shared a clip of Kajol, from Kabhi Khushi Kabhie Gham, doing the namaste as a response to Taehyung and said, "NAMASTE TAEHYUNG @BTS_twt we're waiting for you." "Omg V said Namaste..best news i have heard today..So V knows something information about India..hope BTS visits india once," another fan said.

Did he say Namaste? 😭💜
Namaste baby 💜
I LOVE YOU 😭😭 @BTS_twt pic.twitter.com/8T2DeclqmB

Apart from his namaste clip, another clip featuring V doing yoga but losing balance also had fans' attention. In the clip, V is seen swaying from one side to another but he accidentally puts more energy into the position than required and falls on the floor.

Earlier last yearn BTS members had spoken of their fans in India and said that they hope to reach out to their fans in the country post pandemic ends. RM said, “If the time passes by, and when these crazy things all finish then we want to be there and see all the armies in India, and have this energy together, dance together, sing together. So we want to really, say namaste, to really be there and just give our voices in person.”

"We heard that ARMY in India have shown us great love and support. We want to tell them that we are eager to see you too and hope that day will come soon enough," Suga added.