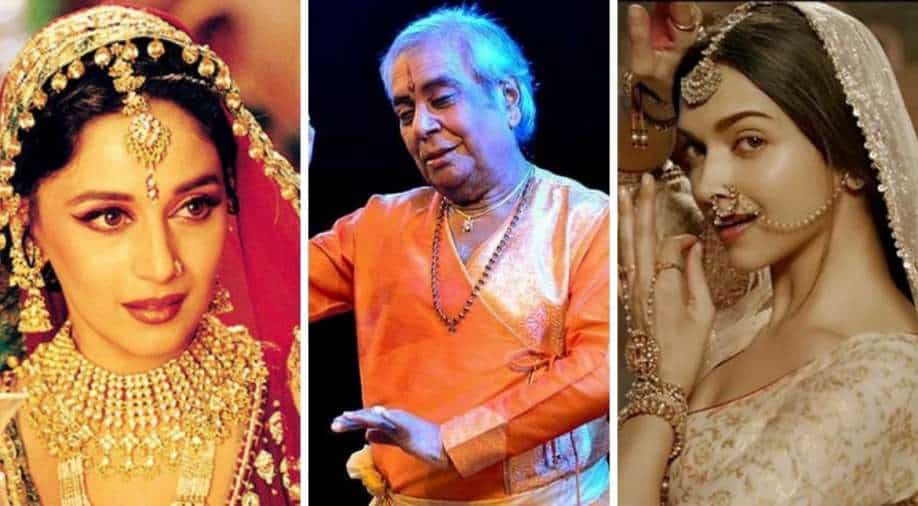 Pt Birju Maharaj was one of the rare artists who was able to create a link between classical dance form and Bollywood.

As Kathak maestro Pt Birju Maharaj breathed his last on Sunday night, he left behind a legacy that will be emulated and imbibed for generations to come. Considered one of the most prominent classical dancers of India, Pt Birju Maharaj was one of the rare artists who was able to create a link between classical dance form and Bollywood.
Guruji, as he was fondly called by his disciples, not only took Kathak outside of India but also created some beautiful songs in Hindi cinema- some of which are still remembered for their uniqueness and authenticity.

Honoured with one of the highest Indian civilian honour, the Padma Vibudhan, Pandit Birju Maharaj was also awarded National Film Award for his choreography in the film 'Vishwaroopam'.

The maestro was 83 when he suffered a massive heart attack on Sunday, reportedly while doing what he knew the best- dance.

Shatranj Ke Khiladi: Film maestro Satyajit Ray's only Hindi film 'Shatranj Ke Khiladi' was a period dramedy about two wealthy noblemen who while away their time playing chess instead of taking care of their area of rule. The film had Sanjeev Kumar and Saeed Jeffrey in the lead role. It also featured Amjad Khan as Nawab Wajid Ali Shah who was known as a connoisseur of arts. A portion had the Nawab enjoying a dance recital in his court. The sequence was choreographed by Pandit Birju Maharaj and featured his student Swati Sen who to date continues to be an integral part of his inner circle. Sen has over the years performed alongside Panditji in numerous shows across the world and even handles his dance schools across the world. Back when the film was shot, she was all of 20 and a relatively new disciple of Panditji but Ray apparently had seen her perform live and was adamant to bring her on board for this sequence. The song 'Kanha Main Tose Hari' was composed, sung and choreographed by Pandit Birju Maharaj.

Dil To Pagal Hai: Pandit Birju Maharaj and Madhuri Dixit had a long association in cinema together. Of the limited work that he took up in Indian cinema, most featured the actress who is known to be a gifted dancer. The duo first screen outing together was in Yash Chopra's 'Dil To Pagal Hai', which had a sequence of Madhuri, who played a dancer in the film, dancing to an instrumental piece- particularly the drums. The film featured the lead hero Shah Rukh Khan playing the drums while Madhuri Dixit danced to the beats. A beautiful fusion set, the sequence remains well-etched in everyone's mind.

Gadar: Ek Prem Katha: Birju Maharaj composed a sequence that featured in the second half of the film. The song 'Aan Milo Sajna' featured dancers from his dance school and did not have the film's leading heroine  Amisha Patel dancing. Instead, it was a part of a backdrop featuring Amisha Patel struggling to break free from her family and escape to her husband Sunny Deol and her son.

Devdas: Pandit Birju Maharaj and Madhuri Dixit again teamed up for Sanjay Leela Bhansali's 'Devdas'. A musical love story set in per-independent India, it had Madhuri playing a prostitute/courtesan Chadramukhi. Several elaborate dance sequences were part of this Bollywood blockbuster. Birju Maharaj choreographed composed music and was the male lead singer for the song 'Kahe Chhed Mohe'. The song was picturised on Dixit who emoted mostly through her eyes and facial expressions - a style in Kathak.

Vishwaroop: Pandit Birju Maharaj choreographed a song called 'Main Radha Tu Shaam' which features Kamal Haasan performing intricate steps of Kathak. The sequence has Haasan, playing a dance teacher and teaching his students. It's not a long sequence and Haasan particular struggles in some areas to copy the same style of Panditji but it's still a rare sequence that features an Indian leading hero attempting to perform a classical dance form. The sequence fetched Pandit Birju Maharaj a National Film Award in 2013.

Dedh Ishqiya: Pandit Birju Maharaj and Madhuri Dixit's final collaboration on-screen was a beautiful thumri (style of singing) called 'Jagaave Saari Raina' where Dixit reminiscing of her younger days, breaks into a dance. The song also has a portion recited by the maestro himself. Beautiful song with equally stunning choreography, it remains one of the highlights of this film.

Bajirao Mastani: Sanjay Leela Bhansali once again roped in Pandit Birju Maharaj for his film 'Bajirao Mastani'. The maestro choreographed 'Mohe Rang Do Laal' which featured the gorgeous Deepika Padukone dancing and serenading Ranveer Singh who played Bajirao. The song was a slow number and heavily depended on expressions and hand moves which Padukone performed beautifully. The song won him the best choreography Filmfare award.

He also choreographed two songs in Muzaffar Ali's 'Jaanisar' which featured Pernia Quereshi. The songs though did not get as much attention as Panditji's other songs. Panditji choreographed and featured in 'Khayal Gatha' which was released in 1988. He was also the choreographer of a film called 'Pranalip- The Tradition'.