Salman Khan on Priyanka Chopra quitting 'Bharat': She did what she wanted and Katrina got what she deserved 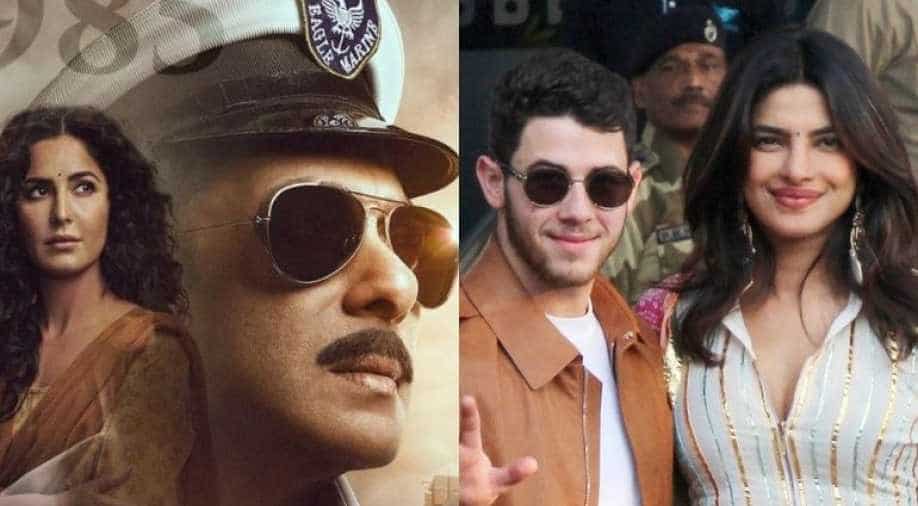 Salman Khan and Katrina Kaif in a poster of 'Bharat' and a file image of Priyanka Chopra and Nick Jonas. Photograph:( WION Web Team )

Ahead of the release of 'Bharat',  Salman Khan has opened up about Chopra's exit from the film which he termed as "embarrassing".

It is a well known fact that Priyanka Chopra was earlier signed to play the female lead in Salman Khan's 'Bharat'. The actress walked out of the film at the last moment to get married to Nick Jonas, and Katrina Kaif was roped in instead to play the female lead. Now, ahead of the film's release, Salman Khan has opened up about Chopra's exit from the film which he termed as "embarrassing".

During a press meet, Salman was asked if he now felt that Priyanka may have been a wrong cast choice for the role. To which the actor said,"No, not a wrong cast. But initially, Priyanka was very keen to do this film. Ali (director Ali Abbas Zafar) and we all thought it was Katrina Kaif`s film. But Katrina and I did `Tiger Zinda Hai` just before that and Ali said that we need a girl who is `Hindustani`.

"I tried telling him, `Why can`t she (Katrina) pull off this role? She has been living in India for the last 20 years.` But then Ali said, `Priyanka ka phone aaya tha? (we got a call from Priyanka)` and it is also true that Priyanka and my sister Arpita Khan are good friends.

"After all this, the `Nick story` happened, the embarrassing thing happened and she chose to get married."

Salman said: "Look, she did the right thing. She did what she wanted, and Katrina got what she deserved. She (Priyanka) informed us five days before the schedule was supposed to start... she must have thought that in this way I would get upset with her and will never work with her.

"She spoke to me saying, `Nick (American actor-singer Nick Jonas) has proposed to me and I want to get married, so there will be some date issues`. I said, `Sure, get married, we can adjust those two, three days. Then she said that she does not want to do the film."

While he believes Priyanka is a hard-working actress, who efficiently maintains her career in Bollywood as well as in the American entertainment industry, he said it takes guts to leave one of the biggest films of her career to get married.

Priyanka, soon after leaving 'Bharat', opted for 'The Sky Is Pink'.

'Bharat' also stars Sunil Grover, Disha Patani, Tabu and Nora Fatehi along with Salman and Katrina and is releasing on 5th June.