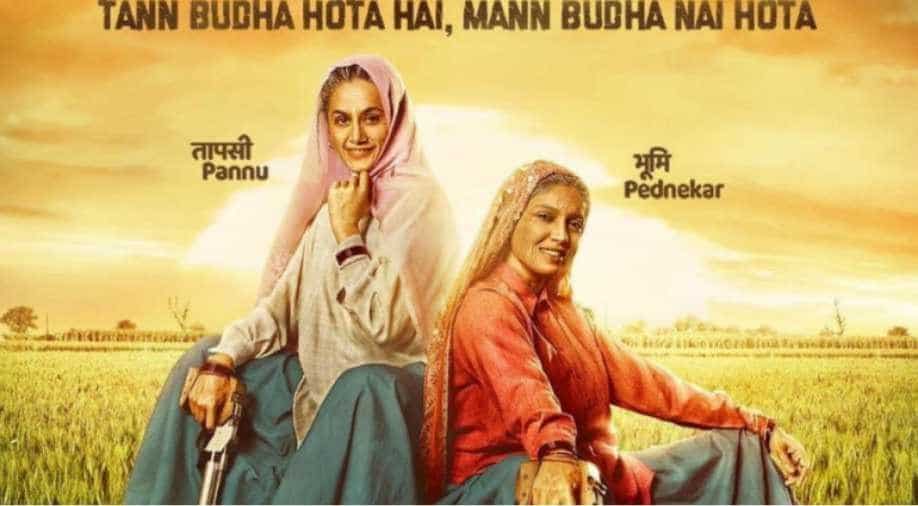 Director Tushar Hiranandani narrates a heartwarming real-life story of two feisty women from an interior village in Uttar Pradesh who take up sharpshooting post 60 - an age when most give up on life.

In one scene of ‘Saand Ki Aankh’, soon after winning their first medals at state level shooting competition, 60 something years old Chandro and Prakashi Tomar are asked their age by a reporter. Unable to tell the exact age, the journalist jokes that women are never okay revealing their age to which Chandro corrects him and says, “There is no shame in hiding one’s age. But women are unable to tell exactly how many years have they lived for themselves.” Poignant and impactful-this line sums up the film well.

Director Tushar Hiranandani narrates a heartwarming real-life story of two feisty women from an interior village in Uttar Pradesh who take up sharpshooting post 60 - an age when most give up on life. Not only are Chandro and Prakashi good at their game, but even win hundreds of medal even as the menfolk in their household remain oblivious about their new activity for a long time.

Sisters-in-law Chandro and Prakashi have spent their lifetime in an oppressed, feudal household- where women are identified through the colours of their dupattas, instead of face or personality. They may be working the most in the household, but are still submissive to the men in their lives. It's only when Doctor Yashpal (Vineet Singh) opens a shooting range in the village to churn out state-level champions, do the grandmothers, now in their 60s, take up shooting. They initially start shooting to inspire and encourage their granddaughters but subsequently find their calling and their voice. After years of hiding from the family and winning medals- there comes a point when they have to reveal their secret for the sake of their daughters. Would the family and society at large accept them?

The story, from the heartland of the country, has a lot to relate to. Women in rural as well as urban areas are often subjugated to patriarchal norms and unnecessary rules which not suppress their voice but also curb freedom. So in that sense, the story of ‘Saand Ki Aankh’ is a known one. You know how the story will pan out eventually yet its the treatment and the performance that keeps you glued to the seat. Without being too preachy, writers Jagdeep Siddhu (dialogues) and Balwinder Singh Janjua paint a very real picture where you feel the pain of these women. You understand why the two women feel suffocated in their own house. You heart goes out to the younger girls, who know they are more capable of winning medals than their brothers and yet are not allowed to pursue their dreams.

The film completely focuses on Bhumi Pednekar and Taapsee Pannu- and they do not disappoint. In a short period, both actresses have carved their niche in the film industry by playing spirited characters. In ‘Saand Ki Ankh’ too they play similar roles, but they adapt the dialect, the mannerisms of rural, uneducated, feisty women well. They fit in the milieu well. I found myself ever so often looking more at Pednekar than Pannu as the former brings in the right amount of restraint to her character Chandro. But the women complement each other well and deliver superlative performances. They share incredible camaraderie on screen and their bond is well reflected on screen.

Among the men, Vineet Kumar as their coach, mentor, and guide deliver a formidable performance. Prakash Jha also impresses as the conservative patriarch who doesn't believe in giving the women in his family a voice.

While the film is pertinent and enjoyable, it isn't completely devoid of flaws. The characters do not age well. The makeup is shoddy and quite an eyesore. The prosthetic used on two actresses are not well done and it is difficult to believe them as aged characters.

While the two actresses deliver in their respective parts, one can't help but wonder why the makers could not have cast senior actresses in these roles. They do have different sets of actors playing the husbands-younger and older- so what stopped them from doing the same in Chandro and Prakashi's case? Surely there is no dearth of senior actresses in this country who would perform equally well.

The film is also a bit long and could have been edited better. The whole ordeal of the four women leaving their homes at the break of dawn every day while the household sleeps appears to be repetitive after a point. And the narrative becomes a bit jumbled near the climax.

While there are these glaring flaws, it is the cast and the story that make 'Saand Ki Aankh' a compelling watch. It celebrates women and their immense potential to juggle multiple roles with ease. It projects strong women who are willing to fight the odds for a better future and inspire countless others to speak up and find their calling in life.